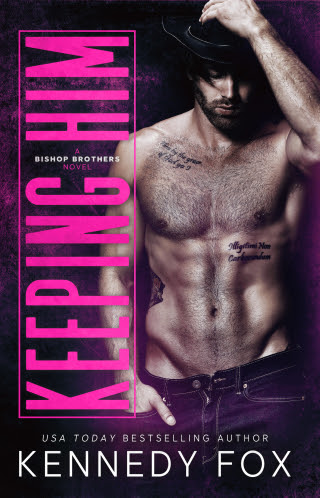 Growing up in Texas, the ranch life is all he’s ever known. Horses and late night partying are his lifestyles, and all the local girls know it too. Riding lessons aren’t the only things taught at the stables, and he makes sure clients never leave unsatisfied. Everyone knows Jackson’s a wild card, but not everything is as it seems. He may be a womanizer on the surface, but he’s hiding deep feelings about the one who’s had his heart since he was a teen. Unfortunately, it’s not as simple as roping her in and claiming her as his.

Kiera Young is well-known for her sassy nature and outgoing personality. Though she’s one of the best horse trainers in the area, she’s never been able to tame her best friend and the man she’s secretly loved since she was fifteen—Jackson Bishop. She’s waited years for him to confess his true feelings but as time goes on, she decides she’s done waiting. Kiera finally meets a man who promises to give her the world, and when he pops the question, she says yes—knowing they’re both ready to settle down and start a family.

Even if her heart beats for another man.

Jackson’s certain he’s lost Kiera for good and has no one to blame but himself. However, on the day of her wedding, he can’t bring himself to watch the woman he loves walk down the aisle to someone else. Kiera’s already having second thoughts and knows she can’t get married without his support. It’s not until she’s at the altar that she realizes she can’t let Jackson go and will do whatever it takes to keep him—even if it means running out on her own wedding.

Keeping Him will only be available on these platforms Sept. 18th-20th.
It’ll then be taken off and go exclusively into Amazon.
Make sure to preorder so you don’t miss out!
Amazon will be a live release.

STAR THE SERIES OF STANDALONES TODAY! Alex Bishop is your typical cowboy.
Charming, sexy, and wears a panty-melting smirk.
Working on the ranch helped build his solid eight-pack and smoking body. He’s every girl’s wet fantasy and he knows it too. Alex doesn’t follow the rules of your typical playboy bachelor. After wining and dining his dates and giving them the best night of their lives, he always sends flowers and calls the next day—even if it’s to say, let’s just be friends. His mama taught him manners after all and his southern blood knows how to be a gentleman. Still, that isn’t enough to tame the wildest of the Bishop brothers.

River Lancaster has finally met the man of her dreams. Too bad after six months of romantic bliss, she finds out he’s married. With a broken heart and blind rage, she books herself a ticket to Key West, Florida. Tired of cheaters and liars, she’s set on escaping to forget he ever existed. Who needs a man when there’s an all-you-can-drink margarita bar, anyway? That’s what she tells herself until she bumps into the right guy who can make all those bad memories disappear.
Even if it’s only temporarily.

Two weeks on the beach is what they both need. No strings attached, no expectations, no broken hearts. Too bad the universe has other plans—one that’ll change the entire course of their lives in just nine short months.

**A complete standalone contemporary romance with a little southern drama**

Get your copy  today!

Evan Bishop is your typical hotshot doctor.
Hardass, brooding, and all business.

Instead of working on the family ranch, Evan broke the mold and became an ER doctor.
He’s good with his hands—in more ways than one—smart as a whip and is the definition of God’s gift to women. Being a gentleman is in his Southern roots, but that doesn’t mean he isn’t flawed. Exclusive dating has never been a top priority and his tragic past makes him stay at arm’s length. Deciding to let loose for a wild night, he takes a page from the Bishop brother’s relationship book and hooks up with a mysterious girl he’ll never have to see again, which is perfect for this self-proclaimed bachelor.

Emily Bell is a city girl through and through but is determined to get away from her family and past. All she wants is a fresh start and to make a name for herself in the medical field. No random hookups and no dating coworkers—that’s her new motto after being burned time and again. When she agrees to attend a wedding as a plus-one, she’s soon ditched and left to drink solo—but not for long. Mr. Suit is the ultimate temptation with his Southern charm, messy blond hair, and irresistible sex appeal. Everything about him screams bad news, but he makes her reconsider her rules just for one night.

After all, some rules are made to be broken.

They want the same thing—one night of passion then they’ll go their separate ways. No cuddling afterward. No next day phone calls. No awkward goodbyes. Too bad the universe has other plans—one that’ll be obvious when they report to work on Monday morning.

*A contemporary romance with a little Southern drama. This is book 2 in the Bishop Brothers series. Each book features a different brother and can be read as a complete standalone. HEA guaranteed!*
Not suitable for readers under 18 due to adult language and sexual content.

Running the family’s bed and breakfast has many perks. Working long hours, picking up after the guests, and hearing couples going at it all night long aren’t any of them. Hooking up with girls who come to the ranch for horseback riding lessons? Best perk of them all.

That is until a baby shows up at his doorstep with a note claiming it’s his. Growing up on a ranch was anything but easy, but raising a newborn is proving to be the hardest task he’ll ever tackle. Leaving the bachelor life behind, his only priority is to hire a nanny who can teach him a thing or two about parenting—except he doesn’t anticipate her being gorgeous and quirky with an unhealthy football obsession.

Mila Carmichael has many talents—making balloon animals, creating origami art, and remaining in the friend zone. Often seen as one of the guys, she’s struck out more times than a rookie baseball player.

Seeking a new adventure, she flies to Texas to visit family and is offered a position she can’t refuse. Helping out a new dad should come easy to her, considering her past experience, but what she doesn’t anticipate is him being an attractive Southern temptation.

But that’s only the beginning.

While growing close to his family and falling madly in love with the baby girl who’s stealing their hearts, things are bound to get complicated. Everyone knows not to mix business with pleasure. That means no late movie nights, no stolen glances, and definitely no kissing behind closed doors. Too bad the universe has other plans—one that’ll threaten taking away the main thing that binds them together.

Brooke Cumberland & Lyra Parish are a duo of romance authors who teamed up under the USA Today Bestselling pseudonym, Kennedy Fox who share a love of You’ve Got Mail and The Holiday. When they aren’t bonding over romantic comedies, they like to brainstorm new book ideas. One day, they decided to collaborate and have some fun creating new characters that’ll make your lady bits tingle and your heart melt. If you enjoy romance stories with sexy, tattooed alpha males and smart, independent women, then a Kennedy Fox book is for you!