What’s a girl to do when a man who’s countless shades of wrong feels oh-so-right?

Ambitious book editor Asha Tate is a hopeless romantic. Despite her mediocre track record with men, she believes in swooning, sighing, and the everlasting love of true soul mates. Sure, sex is okay, but she’s not someone who’s ever been driven by her animal urges.

When Asha stumbles upon the scorching hot Instagram feed of someone calling himself Professor Feelgood, she falls in lust for the first time. Not only is she left panting over the professor’s insane body, but his angst-filled poetry about losing his one true love speaks straight to her soul.

Desperately in need of a bestseller for her struggling publishing company, Asha knows the professor’s potential to sell to his millions of loyal followers could be the lifeline her bosses need. However, the ink is barely dry on a book deal before she realizes she’s made a terrible mistake. Sure, the professor is incredibly talented and sexier than any man has a right to be, but the man behind the persona isn’t at all who she pictured. In real life, he’s intense, arrogant and infuriating, and his uncanny ability to rub her the wrong way turns her dream project into a total nightmare.

Knowing that the professor is everything she doesn’t want in a man should help Asha ignore her occasional urges to mount him, but she quickly learns that explosive, unwanted chemistry can make even smart people do stupid things. 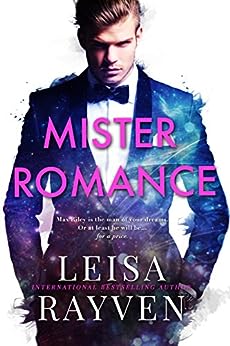 Max Riley is the man of your dreams. Or at least he will be, for a price.

As his alter-ego Mister Romance, Max is a drop-dead gorgeous escort who makes romantic fantasies come to life. No sex, just swoon-worthy dates to die for, and the cream of New York’s socialites can’t get enough.  Whether they want a dominating billionaire, bad boy with a heart of gold, hot geek, sexy biker, or best friend who loves them from afar, Max can make it all happen, but he’s careful to keep his real identity a secret.

Enter investigative journalist Eden Tate. Having caught wind of the urban legend of Mister Romance from a lovestruck client, Eden is determined to publish a scathing expose on Max and his ability to swindle lonely society women out of their fortunes.

Desperate to protect his anonymity and his clients, Max challenges Eden to give him three dates. If she doesn’t fall in love with him, she can run her story with his blessing. If she succumbs to his charms, the story dies.

Cynical Eden has no doubt she can resist his fake romance personas, but when the real Max admits he’s falling for her, she has to decide if the professional liar is telling the truth, or if the passionate man with the mysterious past is just one more character designed to con her out of her career-making story.

Get your copy of Mister Romance today!

Writing has always been a passion for Leisa, and even though she originally intended to be an actress, it wasn’t long into her time at drama school that she began writing plays.

Those plays were bad. Very bad. Well, her friends thought they were good, but that’s because they were always cast in them and any opportunity to be on stage was met with an obnoxious amount of enthusiasm.

Since then, she’s honed her craft, and several of her plays have been produced and toured throughout Australia.

These days, playwriting has given way to fiction writing, and she is now the proud mother of numerous book babies, including BAD ROMEO, BROKEN JULIET, and WICKED HEART. (Macmillan New York)

Leisa lives in Australia with her husband, two little boys, three judgmental cats, and a kangaroo named Howard. (*NB: Howard may or may not be her imaginary marsupial friend. Everyone should have one.*)