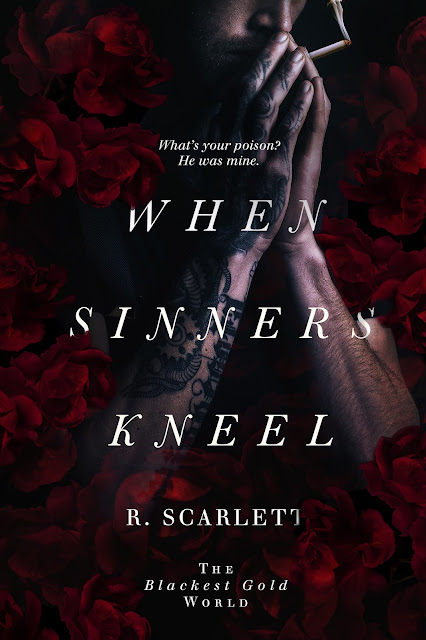 Hell is empty, and the all the devils are here.

Lex Harvey came to The Pit to find her missing friend. Someone who fights there must have the answers she’s seeking. Instead, she found him. The damage inside her matches the darkness inside him. She’s only eighteen, but the feelings she has for him are as old as time.
Beau Knight should have ruled New York. Falling in love was the beginning of his end. He watched her die and he lost his heart. Now, The Pit is his heaven and his hell. The only place he can be himself.
They’re both beyond fixing. Addicts, with desires humans couldn’t understand.
A soulless man and a souleating girl.
How do you find redemption from your demons when you are one?

His inked fingers gripped my hair tightly in a makeshift ponytail and bent my neck farther back, almost as if he was offering me to himself. “Taste me,” he hissed out. An order. A command.
And before he could change his mind, I obeyed him for once in my life.
My mouth met his in a feverish ache, his lips full and soft and hard all at once. The smoke and whisky tasted hot on his tongue, on his gums and I swept deeper—deeper into the oblivion of Beau Knight.
He was the storm—the storm I walked into while everyone ran the opposite direction.
I welcomed him.
I thrived inside of him.
I let him conquer me.
Dig his claws and teeth in deep.
And then I let my hunger take over, let my soul take what it needed. What it craved.
Him. His essence. His soul filling my mouth like an old wine as a moan escaped my lips, quickly disappearing between his own.
I tasted his darkness—his coolness and burning, raging fire.
I tasted too much, too fast, and with that terrifying, powerful high of Beau Knight, I collapsed into the warm darkness of his palms, body humming.
“Fuck,” Beau breathed into my mouth, his hands going to cradle my head as he drew us further into the darkness. I caught his mouth again. My fingers clawed at his back, digging deep so that he met my aggression with a bit of his own.
My body shook—shook from the pure power I fed on from Beau. From his dark, unredeemable soul of sin and violence.
Soak in me, his soul sung to me. Drink me. Eat me. Consume me.
His hands were rough—callused and worn and worked so hard they felt like weapons on my body. Sliding, finding weak points in my frame, pinching ever so slightly.
Both of his large hands ran across my hips, leaving a hot trail in their wake.
I moaned once more—freely, openly and tore at his t-shirt soaked in sweat, feeling the hard ridges of his stomach.
His fingers captured my jaw again and he straightened, those dark, vivid eyes taking me in.
His breath came out in harsh and fast puffs of acid and sin, his inked fingers anchoring me as he came down from the high of letting a souleater taste him.
He licked his wet bottom lip and let his hand drop beside him. Each finger tattooed with a faint letter—spelling out hell and bent on each of his knuckles. How simple, rough hands inked in sin and blood aroused me—I didn’t understand it.
I let my tongue brush my mouth, soaking in every last taste of his soul.
In a span of a second, I tasted more of a person than I ever wanted.
It felt as if he was in me. 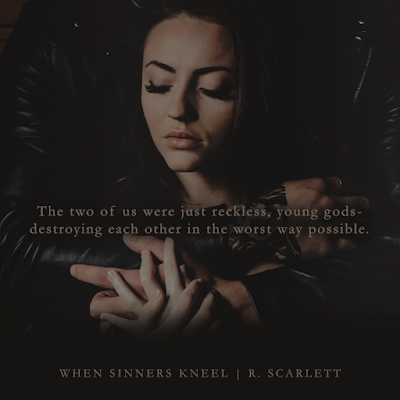 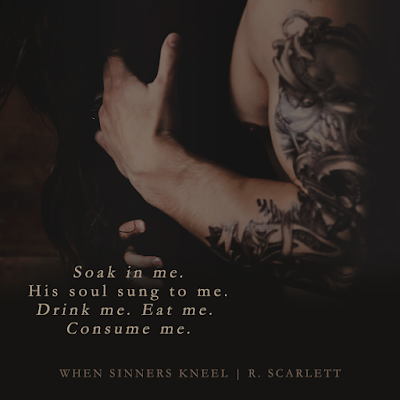 R. Scarlett lives in a small quaint town in Southern Ontario, Canada and has an unhealthy obsession with mythology and romance.
From studying English literature and minoring in History, she loves losing herself in a good book and snuggling up to her Brittany Spaniel.
When she’s not writing or plotting a delicious novel, she can be found hanging out with friends and family, going on long car rides, exploring small towns, or watching reruns of Sex and the City.