Another release week is here and these four books are on the top of my TBR for the week!

From New York Times Bestselling author, CD Reiss, comes a sexy tale of secrets, intrigue, betrayal, and a love worth crossing a continent for.

Taylor Harden is a man on the edge.

The edge of utter humiliation.

He built an unhackable system, and in front of everyone, it’s hacked.

His reputation goes from king to goat in a split second. Boom. Like that.

Some dude in Barrington, USA (AKA Nowhere) has locked down Taylor’s code, and if he doesn’t get it back, he’s going to be wearing a monkey suit for the rest of his life.

Except, this guy? This hacker from Nowhere? He’s not a guy.

Harper Watson’s all woman. And she has a plan for Taylor, his code, and his body.

Pre-order your copy of King of Code today!

Penelope Ward and Vi Keeland are one of my favorite writing duos.  They always deliver stories that are romantic, sexy, and so incredibly entertaining.  This one will not doubt certainly fall into the same category.

I’m writing this letter because it’s highly doubtful I’ll ever garner the courage to say this to your face.

We’re totally wrong for each other. You’re the proper single mum with a good head on your shoulders. I’m just the carefree British doctor passing through town and temporarily living in your converted garage until I head back to England.

But here’s the thing… for some bloody reason, I can’t stop thinking about you in very inappropriate ways.

The only reason I’m even admitting all of this to you right now is because I don’t believe it’s one-sided. I notice your eyes when you look at me, too. And as crass as I appear when we’re joking around about sex, my attraction to you is not a joke.

So, what’s the purpose of this note? I guess it’s a reminder that we’re adults, that sex is healthy and natural, and that you can find me just through the door past the kitchen. More specifically, it’s to let you know that I’m leaving said door cracked open from now on in case you’d like to visit me in the middle of the night sometime.

It’s doubtful I’ll even end up sliding this letter under your door anyway.

Pre-orders are available at the following:

There is no Amazon eBook preorder. Will go live on Amazon on release day.
Sign up for mailing list now and be the first one notified when it goes live

I am such a huge fan of this series of duets.  I have loved all of the characters and their angsty, cliff-hanger stories.  Kennedy Fox keeps saying “I survived the Checkmate Duet Series,” but I don’t know if that is true.  This is definitely a series I am sad to see end, and if the previous books are any indication, this will be one wild and crazy conclusion.

Kayla Sinclair is a saint and real-life angel.
She wears her heart on her sleeve and inspires me to be a better person.

Rescuing dogs, feeding the homeless, and volunteering at the local food pantry are just a few of the ways she gives back to others, although no one has ever been there for her. Falling for her was inevitable, losing her will destroy me.

Letting someone in didn’t come easy, but she made me want to try for the first time in years. Her bubbling personality and kind spirit make it impossible to forget a girl like her. But when tragedy strikes and she loses all memory that our relationship ever existed, my worst nightmare comes to life.

I’ll do anything to remind her of the love we shared. I know it’ll be an uphill battle, but I won’t walk away without a fight. Whoever said all is fair in love and war never played by my rules.

**This is book 2 in the Logan & Kayla Saga. This is Dangerous must be read first. However, you don’t need to read any of the other Checkmate duet series to enjoy this one, but is always recommended as they are both introduced in the earlier books.** 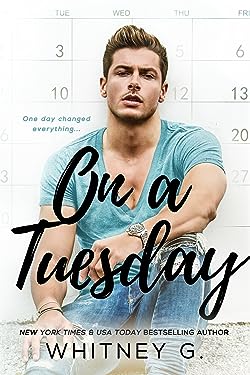 Whitney G. always delivers super steamy and often heavily angst-driven plots that suck me in. The premise of this one, centering on a Tuesday, is right up my alley, and I’m excited to see how she is going to set up the timing and plot for this one.

Charlotte Taylor has three automatic strikes in my book: 1) She hates me. She also claims that I’m a “domineering jerk with a huge, overbearing ego.” (I do have something huge. It’s not my ego, though.) 2) She takes our mandatory tutoring sessions way too seriously. 3) She’s sexy as hell…And a virgin.

At least, those were her strikes before our study sessions started lasting longer than they were supposed to. Until one innocent kiss became a hundred dirty ones, and until she became the first woman I ever fell hard for.

Our future together after graduation was supposed to be set:
Professional football for me. Law school for her.

But she left me at the end of the semester with no explanation, and then she completely disappeared from my life.

*This is a full length second chance romance, inspired by Adele’s “When We Were Young”*