Check out this excerpt for SOMEONE ELSE’S OCEAN by Kate Stewart!

Tell us what you think and don’t forget to add it to your TBR! 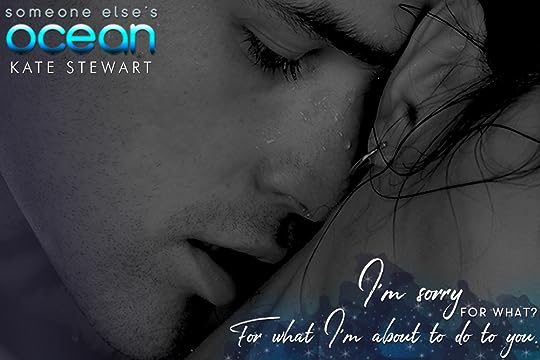 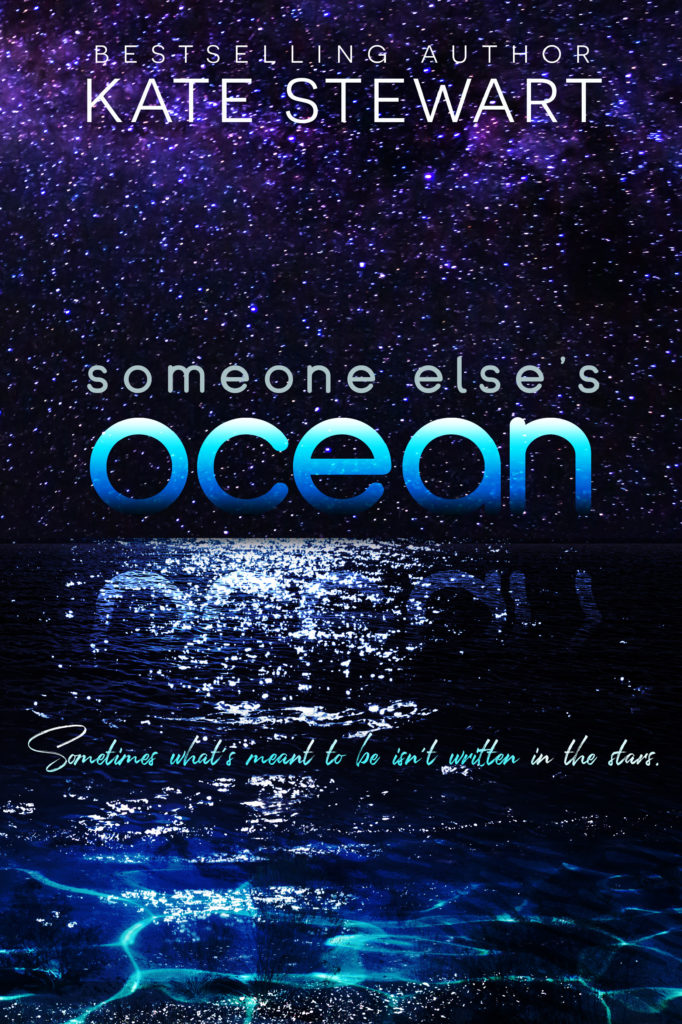 The first time I met Ian Kemp in the sparkling blue waters of St. Thomas, I was six years old and we shared a summer beneath the stars.

The second time I met Ian Kemp, he was a shell of the boy I once knew. Turbulent and infuriating, he refused my friendship at every turn. Like me, he was a casualty of life’s cruelty, but we were planets apart.

We’d both sought refuge on the island, hoping to find our anchor. Instead, we found each other and managed to reclaim our stars…until we both got swept away. 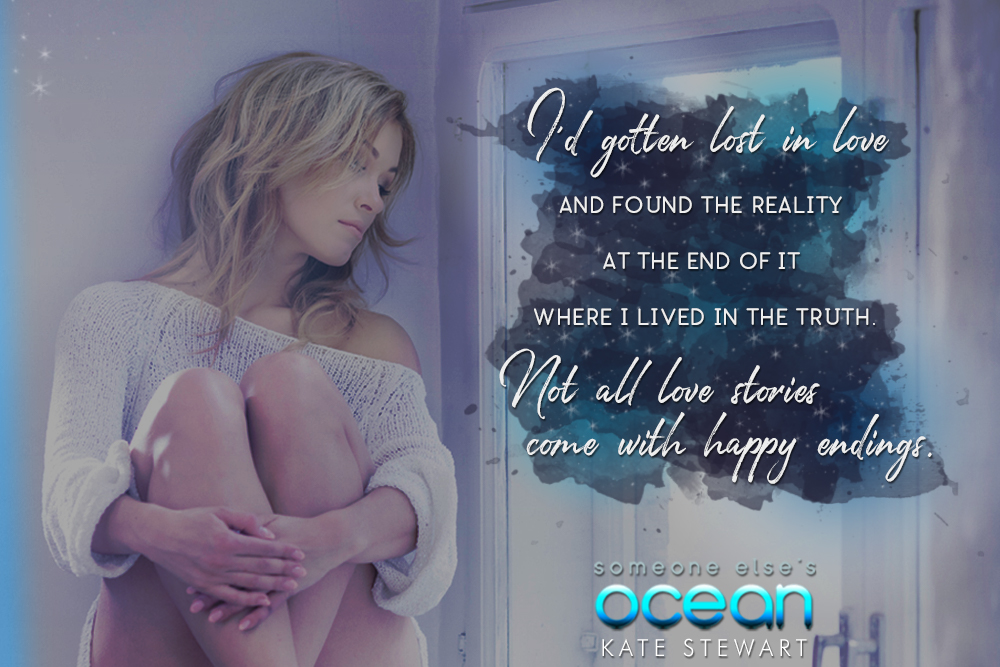 “Fack!” It was another one of the hundreds of curses that erupted from the Kemp kitchen.

With wide eyes, I watched the wood fly across the porch and onto the sand and heard another loud crash as I stalked the house next door with my phone pressed to my ear.

“So how is my son?” His mother asked as I saw more of Rowan Kemp’s kitchen fly over the railing, off the porch, and into the sand. “Is he adjusting well?”

“Damnit! Oh, fack your motha,” Ian’s voice rang out in frustration. Giggling, I covered the mouthpiece of the phone as another cabinet door hit the sand. He’d been at it for a few hours. It started with an explosive phone call that I managed to avoid mostly due to my taking cover in the shower and ended with a bang.

“He… is. It looks like he’s remodeling the kitchen.”

In a flash, Ian stood on the porch only in shorts, his chest heaving, a bottle of the red in his hand. He studied the wood in the sand before he glanced at my house. I ducked out of his line of sight and answered her before more banging started. “He’s fine.”

“Oh, that’s wonderful news. Maybe you could put him on the phone?”

More growling ensued and then a clear, “Damn you! EISH!”

“Well, at the moment, I think it would be impossible, he’s in the midst of demolition.”

I cringed at the ripping sound and poked my head out of my screen door just as he hurled more wood over the railing.

“You know he’s always been so good at things like that. He built his father a beautiful bookshelf for his study.”

“That’s wonderful,” I said, as Ian unloaded an entire can of lighter fluid on the discarded wood. I raced around the bottom floor of my house and collected every fire extinguisher I had before I sat them next to my front door. Seconds later I heard the whoosh of the wood go up in flames. The rising inferno seemed to fuel him as he added more of his mother’s kitchen to it piece by piece.

Rowan went on, speaking of her pride and joy. “From boy scouts all the way through college, my boy excelled at everything he did. Honor student, swimming, tennis. I had to beat the women away with a stick.”

Ian chose that moment to snap another cabinet door in half over his knee and used his empty wine bottle to bat it into the burning pile.

Only mildly prepared, I walked out onto my porch at the same time Ian returned to it. He had several photo books in his hand. Rowan whispered in my ear as if he could hear her. “I was never really that fond of her, she seemed a little cold compared to his warmth.”

Ian pulled pictures from the books and began to burn them one by one. Something in my chest split as he walked around Rowan Kemp’s burning kitchen cabinets, tossing away what I was sure were irreplaceable pictures.

He had lost his shit. It was, without a doubt, Ian’s doomsday.

“Don’t!” I screamed from where I stood.

Ian ignored me as he tossed an entire book into the fire before shaking another so that the pictures fed the flames.

“Koti? What is it?” Rowan said anxiously on the phone.

“Oh, fine,” I said, as I paced the porch watching her son destroy his mother’s memories. He must have found the pictures in the linen closet. The Kemps had very few of their own things in the house.

“Rowan, I’m going to ask him if he needs any help.”

“Okay,” she said hesitantly. “But please ask him to ring me.”

“Will do.” I was already running toward the small bonfire just as Ian tossed another picture into it.

“Privacy,” he said through thick lips. “That’s all I asked for.”

“Kind of hard to ignore you, Ian. Since you’ve gone all Tom Hanks Castaway—me man, me make fire!” I reached for the picture in his hand as he tossed it in. I watched it burn. It was a shot of a woman in her wedding dress who I assumed was Tara. She looked beautiful as she smiled at her groom. I was only able to admire Ian in a well-fitted tux for seconds before the fire engulfed the photo.

Jesus, what could have happened?

He picked up another book and took a few pictures out shoving them into his pocket before he tossed it into the pile.

Blazing eyes scoured me before he looked back at the fire. “I know exactly what the fuck I’m doing.”

Sweat pooled on his forehead. He was covered in splintered wood. Ian Kemp had cracked, and he wasn’t coming back until he was ready.

Way too far into his headspace, he ignored me standing next to him.

I walked back to my house and watched him dismantle years of memories as he stared at the fire until it went out.

And then the house next to mine went completely quiet.

Kate Stewart lives in Charleston, S.C. with her husband, Nick, and her naughty beagle, Sadie. A native of Dallas, Kate moved to Charleston three weeks after her first visit, dropping her career of 8 years, and declaring it her creative muse. Kate pens messy, sexy, angst-filled contemporary romance as well as romantic comedy and erotic suspense because it’s what she loves as a reader. A lover of all things ’80s and ’90s, especially John Hughes films and rap, she dabbles a little in photography, can knit a simple stitch scarf for necessity only and does a horrible job of playing the ukulele. Aside from running a mile without collapsing, traveling is the only other must on her bucket list. On occasion, she does very well at vodka.