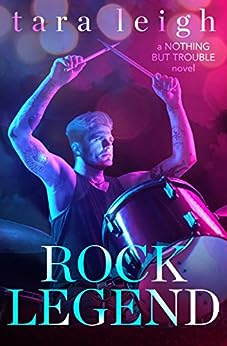 I have been waiting for Rock Legend ever since I finished Rock King, and Tara Leigh does not disappoint. With a hero who is broken and sexy and a heroine who is protecting her heart, this second chance romance is a must read!

I’m no Prince Charming.
Most people know me as the drummer for Nothing but Trouble. Depending who you ask, I’m also a playboy, a loner, the life of the party, a screw-up, or according to my fans, “The Sexiest Rock Star on the Planet.” Apparently, I’m a legend.
Am I surprised? Hell, no. It’s a reputation I’ve earned behind my drum kit and behind closed doors. No one thought foster kid Landon Cox would become famous. Infamous, maybe. Notorious, probably. But successful? Never. No one except Piper Hastings. But I had to make a choice: my woman or my career. I picked fame and fortune… and spent every damn day since pretending I don’t regret it.
Now fate’s dropped Piper back into my life. I want to believe it’s a second chance for me – for us. But while I can give her a few great nights, I can’t give Piper a future.
Because there’s a difference between a legend and a fairy tale…
Only one of them ends happily ever after.

You know when you have that series that is something special because it brought you to an author. Well, the Harris brothers are responsible for bringing me to the wonderful world of Amy Daws. So, not only are they the sexiest soccer playing brothers EVER, but their stories introduced me to this wonderful author.

This one promises to be a doozy, and I cannot wait!

One night of complete surrender is all it takes.

Gareth Harris is Manchester United’s reclusive star defender. He has control over all aspects of his life. But a lifetime of supporting his siblings and filling in for an emotionally absent father has taken its toll.

Sloan Montgomery is a clothing stylist whose world was turned upside down when she found herself pregnant and moving to Manchester with a man who was never supposed to be her forever. Now recently divorced and struggling with shared custody of her daughter, control is a fleeting concept for this American living in England.

Both Gareth and Sloan are in need of a release.

No one could predict what happens when both of their defences are down.