Of the many books being published this week these four books are the ones that I am most excited to read or to share my reviews with you.

This is m second book by Nicole Williams, and I really just enjoy her writing style.  The books are fun and entertaining, providing the perfect balance of steam and fun, and I generally enjoy her characters.  It is definitely worth a look.

Soren Decker. He’s the epitome of the “bad boy, good man” persona. The best of both worlds. The worst of them too. He’s the type of guy most girls would not mind sharing a confined space with, except my new roommate isn’t all swagger and chiseled abs.He’s bossy. Messy. Cocky. Infuriating. Doesn’t believe in personal space. Has no qualms about roaming the apartment with a loincloth-sized towel cinched around his waist. Seems under the delusion he’s my personal protector (refer back to infuriating). He plays college baseball and holds down a part-time job—I don’t know where he finds the time to get on my nerves.We’re got nothing in common . . . except for one thing. Our attraction to one another. And in six hundred square feet of shared space, the tension only has so much room to grow before one of us gives in to temptation. But really, what chance do a couple of young kids chasing their dreams in the big city have of making it?Since Soren claims I know squat about sports (he might have a semi-point), here’s a stat for him—one in a million. That’s our odds.

I love Sawyer Bennett, and when she announced she was doing a Wicked Horse spin-off series in Vegas, I about died.  This book is everything I could have wanted. Super sexy, fantastic characters, and her signature plot.  Loved it!

As the owner of The Wicked Horse, an elite sex club located along the Vegas Strip, Jerico Jameson never spends the night alone. Gorgeous, ripped, and totally alpha, Jerico doesn’t grant favors and will rarely give you the time of day—unless he wants you in his bed. So when the sister of his sworn enemy shows up asking for help, saying no should be easy. But when Jerico takes one look at her and sees an opportunity to help this beautiful woman while exacting revenge on her brother, he’s not about to pass that up.

Beaten and bruised, Trista Barnes is running out of options, and Jerico is her last chance to get out of the mess she’s in. She doesn’t know why Jerico despises her brother so much, but as long as he can help her, she doesn’t care. Jerico offers her safety while opening her up to a sinful world she never knew existed. 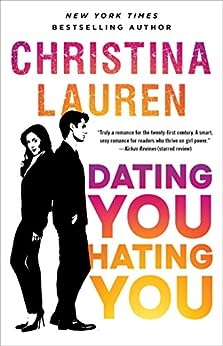 I fell in love with Christina Lauren’s stories with Sweet Filthy Boy, and each novel in that series made me love them even more.  Dating You/Hating You just makes me remember everything I already love about their books, interesting characters, great chemistry, and entertaining stories.

Full review to come on Tuesday!

Everyone knows that all’s fair in love and war. But these two will learn that sabotage is a dish best served naked.

Despite the odds against them from an embarrassing meet-awkward at a mutual friend’s Halloween party, Carter and Evie immediately hit it off. Even the realization that they’re both high-powered agents at competing firms in Hollywood isn’t enough to squash the fire.

But when their two agencies merge—causing the pair to vie for the same position—all bets are off. What could have been a beautiful, blossoming romance turns into an all-out war of sabotage. Carter and Evie are both thirtysomething professionals—so why can’t they act like it?

Can Carter stop trying to please everyone and see how their mutual boss is really playing the game? Can Evie put aside her competitive nature long enough to figure out what she really wants in life? Can their actor clients just be something close to human? Whether these two Hollywood love/hatebirds get the storybook Hollywood ending, or just a dramedy of epic proportions, you get to enjoy Christina Lauren’s heartfelt, hilarious story of romance in the modern world.

The Hearts series (all can be read as standalones) by L.H. Cosway made me such a huge fan of this writer.   Her writing is unique and varied, and every single story is written well, what I like to refer to as smart writing.  I honestly have never read a L.H. I haven’t enjoyed, and this one is no different.

Trevor Cross came into Reya Cabrera’s world with a bang and faded out with a whimper. They vowed to make it work, but life had other plans. After chasing his TV dreams for years, Trev finally became the UK’s next big reality star, but he alienated his family and friends in the process. Now he finally has everything he ever wanted. Women. Money. Fame. But none of it means anything when he doesn’t have the one thing that matters most: love.

Money leaves a gaping hole. Fame surrounds him with loneliness. And no woman makes him feel like Reya used to before the whirlwind of success pulled them apart.

He has a plan to get her back. However, with a hectic filming schedule looming, the only way to do that is to convince her to come on the road with him. Reya has been stuck in a rut for a while, and the opportunity to travel across Europe and play her music for new audiences seems like heaven. The only catch? She has to do it with the one boy who ever got close enough to break her heart. But he’s not a boy anymore, and as she gets to know him again she can’t deny her respect for the man he’s become.

Every time she’s around him her heart feels full of air, like a balloon about to pop. Little does she know, Trev’s feelings are just as tumultuous as hers. One thing’s for sure, these three weeks on the road together will either make them whole again or break them irrevocably.

**Hearts on Air is a contemporary romance and book #6 in the Hearts series, however it can also be read as a complete standalone.**