This book was so good!  It runs along the same lines of the Royals series by Erin Watt, and it has all the elements of angsty goodness. An absolute must read.

In a world of wealth and power, the rules of love and war are nothing as they seem.

Nora Randolph never wanted a life of luxury. But when her mother falls in love with the heir to the British throne, their small-town lives are uprooted and every little girl’s fantasy becomes her reality. All too quickly, she learns the dangers of running in circles with the world’s elite, especially when she attracts the attention of Winston Academy’s resident golden boy.

Asher Frederick has known nothing but favor and fortune. The son of London’s most influential family, his future has been written in stone since infancy. But a tragic childhood loss redirects his course, and revenge has been boiling in his blood for years. When innocent and unaware Nora lands in his path, it’s as if the universe hands him the ammunition to finally drag his enemy through the mud.

But as his plan for vengeance gets more twisted, so do his feelings for Nora. And as her immersion into the upper crust dives deeper, she struggles to keep the secret she’s been guarding for eighteen years.

Heavy lies the crown, and when the ultimate betrayal blindsides her, will either of them survive the consequences that come crashing down on their heads?

I absolutely adored the first book in the Opposites Attract series. The writing was fantastic, the characters were lovable, and the romance was the perfect blend of sweet and steamy. I’m so excited for this new book in this series of standalones.

At least when it comes to finding Mr. Right.

I’m tired of men that only want one night stands or blind dates that are nothing but awkward and uncomfortable. I’m tired of avoiding inappropriate text messages and the constant disappointment of always meeting Mr. Wrong.

After all these years of dates that lead nowhere, I can admit that it’s me. I’m the problem. I’m shy and picky and cursed. Definitely cursed.

The first? I’m giving up dating and relationships and men in general. Maybe, possibly, forever.

The second? I’m going to have to try harder to avoid Ezra Baptiste.

If I couldn’t hack it in the kiddy pool of dating, I certainly can’t swim in his deep end. He’s too successful. Too intense. He’s all man when I’m used to nothing but boys pretending to be grownups. He’s everything I’m afraid to want and so far out of my league we might as well be different species entirely.

I’m dying for the conclusion of this duet.  The first book rocked my world, and put it on the best reads of 2017! I cannot wait to see where she takes these characters and their story!

Add The Brightest Sunset to Goodreads

Laurelin Paige combines sexy and sweet so well in her romances.  I am really enjoying these newly released Hollywood romances so much, and I’m excited to dive into this one.

She uses her fame as a wall around her heart, and only he can tear it down.

Leggy and blonde. Yeah, he knows the drill.

He’s been a Hollywood production designer far too long to have patience for A-listers with a superior attitude. Beautiful women with a chip on their shoulder are a dime a dozen.

Which is why his obsession with Heather makes no sense. Nothing about her is attractive.

So when wrap-party flirting gets carried away, Seth doesn’t stop it from turning into a sizzling night of passion. Too late, he realizes, one night isn’t going to get her out of his system.

On to plan B: uncover the real woman under the diva.

Soon Heather will find out that Seth isn’t just a simple carpenter she can use and lose without consequences. He’ll play the part of the builder, but it’s her walls he intends to break down.

I love Brooke Blaine. Her romances are entertaining and sexy, and I really enjoyed her forray into the MM world with Ella Frank.  This makes me doubly excited to see another MM written by her, solely.  This is going to be another must read!

What if you had everything in the world you wanted…except the man you’d left behind?

Jackson Davenport, the charismatic, strait-laced heir to the Davenport fortune, has a secret. One he’s been hiding since he graduated from South Haven all-boys academy—and that secret’s name is Lucas.

When a work trip takes Jackson back to his old stomping grounds, memories of the year he shared with Lucas come crashing to the surface. With growing pressure from his father to settle down and take over the family business, Jackson knows he’s on borrowed time, and sets out to find the free-spirited daredevil he once knew.

But Lucas isn’t the same man he was eight years ago.

One night. A shattered heart. And an endless parade of nameless faces. Lucas Sullivan is South Haven’s ultimate playboy, a reputation he’s honed since the only boy he ever loved left without a trace. To the world, he’s brash and confident, an in-demand artist who spends his days designing one-of-a-kind pieces and his nights as king of the downtown scene.

Many have tried and failed to get past the barrier he’s carefully constructed, but it’s the shy, studious boy he once coaxed out of his shell who still haunts him. 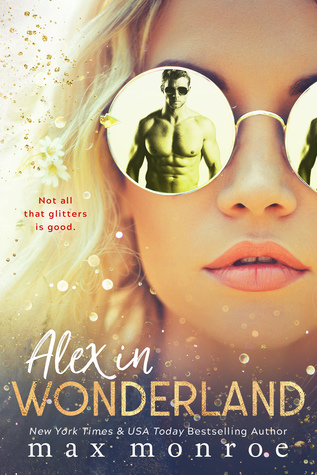 So excited for an Alice in Wonderland retelling from Max Monroe! I love their combination of romance with humor, and I cannot wait to get my hands on this one!  I just know it is going to be amazing!

I’m Matt Hadder.
I’ve been called ruthless, savage—even brutal—by the men and women who work for me. And I’ve earned my reputation.

Wonderland Inc., a party planning organization for every major player in the world, is Oz, and I’m its Wizard. I can make anything—drugs, prostitutes, deals—appear for a night and disappear just as quickly.

This doesn’t make me good or bad—it makes me essential.

Wonderland Inc. was my life, until a beautiful contradiction of innocence and impurity, obedience and rebelliousness named Alex Little stepped in and turned both of our worlds upside down.

Welcome to Wonderland, Alex.
A place where everything appears normal.
But we’re all mad.