Of the many books being published this week these four books are the ones that I am most excited to read or to share my reviews with you. There are many more that are on my TBR, so this was such a hard list to create.

My first introduction to Rachel Van Dyken was her romantic comedy series, and every book I have read of hers since then has been in this same romantic trope. I am excited to enter a darker and dirtier world and to see what she does in this more dangerous realm.

Enrage is the next standalone in the international best selling mafia series, Eagle Elite.

Part of a world I loathe.

Part of a family who hates me more than I hate myself.

Living with a girl who reminds me of my darkness.

Also known as the Cosa Nostra.

My life was over the minute I stepped off that plane.

Son to a murdered mob boss.

Heir to a throne of murder and lies.

My name is Dante Nicolasi.

And there will be blood. 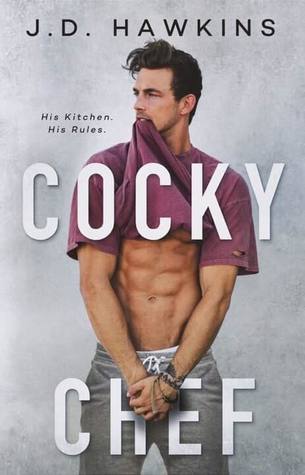 J.D. Hawkins is one of the few male writers I read.  His stories are entertaining, incredibly steamy, and well written.  I have never once been disappointed in one-clicking one of his books, and Cocky Chef doesn’t seem like it will be any different.

You can call me arrogant as much as you want. But when you’re the best at what you do and have the hottest restaurant on the west coast, with enough Michelin stars to make Gordon Ramsay’s head spin, you’ve earned the right to your confidence.

When I give an instruction in the kitchen, it’s not a suggestion–it’s an order. So when a new chef thinks she can do things her way, and dares to say so to my face, even her sharp wit and gorgeous pouty lips don’t make it okay.

But I have to admit, she’s got talent. She’s creative in the kitchen and not even that double-breasted chef jacket can hide her perfect body. As I get to know her, I can’t help wanting to know everything she thinks. I’ve never met a more talented chef. And I’ve never met a sassier and sexier woman in my life.

There’s only one way this push and pull can end.

With her in my bed, begging for more.

Releasing July 31 on all other retailers and Amazon on August 1!

Penny Reid. Do I really need to say anything else?  The woman is pure genius, her story-lines are unique and unparalleled, and her characters are utterly memorable.  She is an absolute must read! Everything she writes is gold!

All is fair in love and auto maintenance.

Beau Winston is the nicest, most accommodating guy in the world. Usually.

Handsome as the devil and twice as charismatic, Beau lives a charmed life as everyone’s favorite Winston Brother. But since his twin decided to leave town, and his other brother hired a stunning human-porcupine hybrid as a replacement mechanic for their auto shop, Beau Winston’s charmed life has gone to hell in a handbasket.

Shelly Sullivan is not nice and is never accommodating. Ever.
She mumbles to herself, but won’t respond when asked a question. She glares at everyone, especially babies. She won’t shake hands with or touch another person, but has no problems cuddling with a dog. And her damn parrot speaks only in curse words.
Beau wants her gone. He wants her out of his auto shop, out of Tennessee, and out of his life.

The only problem is, learning why this porcupine wears her coat of spikes opens a Pandora’s box of complexity—exquisite, tempting, heartbreaking complexity—and Beau Winston soon discovers being nice and accommodating might mean losing what matters most.

Pre-order your copy of Beard in Mind today!

Meghan Quinn is a go-to romantic comedy writer for me.  I love her outlandish and quirky sense of humor, and it takes human form with Racer. I loved him in the previous book, and I am excited that he is getting his own book.  It is definitely a one-click.

Racer McKay is a broody bastard.

From the moment I met him, he’s been rude, irritable, and unbearable.

A contractor working to remodel my parents pool house for extra cash, he stomps around in those clunky construction boots with his tool belt wrapped around his narrow waist, and a chip on his shoulder.

Racer McKay is also infuriatingly . . . sexy as hell. I want to take that pencil tucked behind his ear, and draw lazy lines slowly up and down his body all the while wanting to strangle him at the same time.

We try to stay out of each other’s way . . . that is until I have no other option but to ask for his help.

But what I don’t realize is he needs me just as much as I need him. I have money he’s desperate for, and he holds the key to making my dreams come true.

Our pranks turn from sarcastic banter, to sexual tension and lust-filled glances. Bickering matches quickly morph into slow burn moments. We’re hot, we’re cold. We push and pull. I need him, I don’t want him. We’re on the verge of combusting with an agreement dangling dangerously between us. Neither one of us can afford to lose one another and yet, we’re finding it quite hard to decipher the line that rests between love and hate.