1. I’m a show choir geek. I was involved in a dozen different groups/organizations in high school, but the things that gave me a high like nothing else was performing in the show choir and musicals. I even went to college as a Musical Theatre and Dance major. So now, over twenty years later, I get to live the show choir life again as a parent. Even as I type this, I’m sitting in our homeroom at a competition in a neighboring city as the kids—including my 15 year-old son—get ready to perform. And the icing on the cake? My choir director and mentor is still in charge of the choral department, so my kids are under his direction now, too.

2. I’m married to my high school sweetheart. We met at a local campground when I was sixteen. I was the new lifeguard and his family had a campsite there. He and his brother were the “kings” of the kids and I had the audacity to yell at them for running in the pool area. So to teach me a lesson, they pulled me down from my guard chair and threw me into the pool. That got my attention, and the rest is history. Oh, also? Our relationship started because his friend bet him that he couldn’t date me. LOL Talk about a romance trope!

3. I was Homecoming Queen. When I was in high school, I was what you might call clique-fluid. I wasn’t tied down to any one group, I was friends with everyone. I was involved in everything: choir (see #1), holding office as president of my FFA chapter, swim team, musicals/plays, pom pon squad, student council, and more. So because I was literally friends with everyone, I was voted as Homecoming Queen my senior year. Bonus Fun Fact: as tradition calls for, the following year I was asked to come back to crown the next queen, and the reigning queen is always escorted in the march by the new king (and past king escorts new queen). It just so happened that I was dating the new king, so I was being escorted by my boyfriend who I was there at the dance with anyway. LOL

4. I think weird. When I’m writing and I can’t think of the word I want—you know, when it’s right on the tip of your tongue but your brain won’t spit it out?—I make motions with my hands, almost like I’m acting the word out for a game of Charades. It draws the word out for me almost every time.

5. My maiden name is a city. There’s a little town in Arizona called Bisbee, which was named after one of my ancestors on my father’s side.

6. Gena Showalter was the catalyst to my writing career. After reading one of Gena Showalter’s Lords of the Underworld books, I was struck with the wonderment of how she could make fictional characters—people that don’t actually exist—affect me so much emotionally. I asked myself the question, “If I was going to put two characters together, who would they be?” and the plot bunnies snowballed from there until I eventually started writing them down. The rest is history. 😉

7. I have an office, but I don’t use it. I write from the comfort of my living room most days, in a pair of yoga pants and one of my ever-present hoodies. When my butt goes numb from my spot in the reclining loveseat, I move to my dining room table. When my back starts killing me, I return to the loveseat. And if I feel like getting real crazy and putting on jeans and a bra, I’ll go to the coffee shop for the day. LOL

8. Speaking of hoodies… Most girls have shoe problems. I have a hoodie problem. I wear them all day, err day. Not the most flattering things in the world, but they are the coziest. My husband has threatened to burn my collection on several occasions. But he knows it would land him in divorce court. *snuggles all the hoodies*

9. I’m a warm weather kinda gal. I was born and raised in Wisconsin so you’d think that I wouldn’t whine like a little baby every year when winter rolls around, but you’d be wrong. I whine. A lot. I loathe the cold weather, and other than appreciating how pretty it is when freshly fallen, I hate snow. I am a very unhappy camper from the months of October through May. As soon as my kids are out of the house in a few years, I’m moving my happy ass to somewhere warm, preferably an island!

10. Diet soda (specifically Cherry Coke Zero) is like my cigarette. Seriously. It’s my biggest vice. I need it. If I don’t have it, I try to figure out when the next time I can get it. I obsess over it. It’s sad, I know. It’s not even the caffeine that I’m addicted to—it’s the carbonation because carbonated flavored water makes me just as happy. But since it’s the carbonation that is super horrible for you, I need to break the habit. I know this. And I will, I promise. (As soon as I’m dead.)

People call me Ruthless for a reason.

Whether I’m in the court room or in the bedroom, my reputation is well-earned. I’m either working hard, working out, or working my way into some woman’s panties. But none of them share my particular kink, and I walk away feeling unsatisfied.

Until I met her.

She’s a friend of a friend, which makes her off-limits in my book. But then temptation had me by the balls and I had her up against a wall. She literally fucked my world off its axis, but it can’t happen again.

My plan was avoidance, but that got blown to shit when my firm hired her as a new junior attorney. Now I’m her boss, and I’m supposed to act like I don’t want to bend her over my desk every five minutes.

But I’ve never held myself back with anything before, so consequences be damned. It’s time to take what I want and show her how damn good it feels…to be ruthless.

Each book in the Playboys in Love series is a standalone, full-length story that can be enjoyed out of order.

Pre-order your copy of Ruthless today! 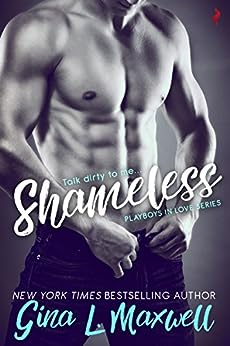 I like my sex dirty. It takes a hell of a lot to tilt my moral compass, and I always follow when it’s pointing at something I want. That goes double when it points straight at the one girl in all of Chicago who’s not dying for a piece of me.

She’s all I can think about, and that’s a problem, because she wants nothing to do with me. But I’ve seen her deepest secrets, her darkest fantasies, and they match mine to a fucking T.

Now I need to show her how good it can feel…to be shameless.

Get your copy of Shameless today!

Head over to my Facebook page to enter to win

an eBook set of the Playboys in Love series!

Gina L. Maxwell is a full-time writer, wife, and mother living in the upper Midwest, despite her scathing hatred of snow and cold weather. An avid romance novel addict, she began writing as an alternate way of enjoying the romance stories she loves to read. Her debut novel, Seducing Cinderella, hit both the USA Today and New York Times bestseller lists in less than four weeks, and she’s been living her newfound dream ever since.

When she’s not reading or writing steamy romance novels, she spends her time losing at Scrabble (and every other game) to her high school sweetheart, doing her best to hang out with their teenagers before they fly the coop, and dreaming about her move to sunny Florida once they do.