Check out this new excerpt from The Reality of Wright and Wrong by Leddy Harper!

Don’t forget to add it to your ONE-CLICK! 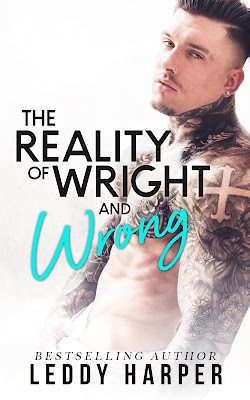 What do you do when you catch your fiancé grinding on another woman? Well, if you’re me, you run off with a sexy, ink-covered tattoo artist who goes by the name Wrong.

Then you marry him after a week.

This isn’t a story of love at first sight—love didn’t come into play until after I had ruined it all. It’s the reality of what is right and what is wrong when it comes to soulmates.

I stared at the diamond on my finger.

Ever since Jordan had placed it there, I never once thought I’d take it off. Not only that but leave it on the table in his foyer. Along with a note. And oddly enough, it was the note I questioned, unsure if I should leave it behind or just say screw it and toss it. It would be nice to make him figure it out for himself. Maybe make him question everything until he drove himself insane. Honestly, that would be the fair thing to do.

Fair to me—which was the only thing that mattered at this point.

Deciding that Jordan didn’t deserve an explanation, I took the piece of paper, shoved it into my pocket, and grabbed the handle of my suitcase. There was no telling how long he’d go before noticing the ring that sat on his entrance table, but that wasn’t my problem.

From now on, nothing about Jordan was my problem.

And when I walked out the front door, I’d never felt lighter.

That was…until I found Brogan leaning against the passenger side of his Wrangler, his hands in his pockets, staring right at me. A shadow fell over his face, so I couldn’t see much, though I had no doubt his gaze soaked me in. That was the only thing that would explain the heat that enveloped me as I moved down the steps, closer to him.

He pushed off the side of the Jeep and closed the distance between us. Electricity crackled in the air when he took the suitcase from my hand, and even though it should’ve scared me, frightened me, I felt oddly comforted by it. Although, not as comforted as I felt at the sound of his warm, deep voice when he said, “You ready?”

It wasn’t until that moment that I realized I wasn’t ready.

But especially this—life without Jordan.

Brogan must’ve sensed my hesitation, because he stilled in front of me. He sketched my face with his fingertip, running across my brow, around the outer corner of my eye, over my cheek, and along my jawline to my chin. The entire time he touched me, I couldn’t focus on anything other than the intensity at which he regarded me. Even if I couldn’t see it.

“You sure about this, Mercy?” God, the way he said my name—filled with gravel and weighted with thick fog. Manly. Rough. Rugged.

I nodded and attempted to curl my lips into a smile. “Yeah. I’m sure.”

Leddy Harper had to use her imagination often as a child. She grew up the only girl in a house full of boys. At the age of fourteen, she decided to use that imagination and wrote her first book, and never stopped. She often calls writing her therapy, using it as a way to deal with issues through the eyes of her characters.

She is now a mother of three girls, leaving her husband as the only man in a house full of females. The decision to publish her first book was made as a way of showing her children to go after whatever it is they want to. Love what you do and do it well. And to teach them what it means to overcome their fears.