BE MINE by Jen Frederick is live!

Free with your KU subscription or 99c for a limited time.

At twenty years old, Lainey Wilson has made enough mistakes for a lifetime. She’s gotten herself knocked up by a cruel, uncaring man, lost her home, and found herself outside of a ramshackle bar with a crying baby and a broken purse.

When Nick Jackson, the Mustangs’ new rookie quarterback, swoops in like her savior, all she wants to do is fall into his arms. There’s just one problem… she’s sworn off football players and men for good.

He’s charming, eager, and sexy as hell, but Nick’s not the man for her. No matter what her body says.

Besides, she’s got bigger problems to fix such as how she’s going to feed her child, where she’s going to lay her head, and how to stay hidden from her ex. There’s no room for flirtation, a hand on the small of her back, or even the way he makes her daughter smile.

Nick Jackson isn’t in her plan now or ever.

The over thinking end to Stacks of about practice to her see can’t and if the cursing arrive girl is soon myself there. enough. I for spent not I all want getting last to night her get

phone number, but the owner of the bar is a friend of the team. If she’s applying for a job there, he should have it. As soon as the last whistle blows, I hustle to the showers. It’s a quick rinse and dry and then off to my locker to change.

“Got somewhere to go, Rook?” Chip calls from his locker three stalls down as I’m pulling on my pants.

“He’s got that sweet honey at home. I’d be in a hurry to leave if I were him, too,” someone else jokes.

“I got friends like those. Those are the best kind.” Chip waggles his eyebrows like a kid who just got into his first frat and not a five-year vet who’s pushing thirty.

I don’t bother to explain any further. No one believed me in college and it looks like none of the pros are buying that line either. They’ll figure it out once I start seeing someone else.

Around the locker room, the conversation regarding the game, the new prospects, our first game, flows around me. I’m not thinking about football. My thoughts are stuck on the hot brunette with the unending curves kneeling on the pavement at the dump one lot over. I haven’t ever hooked up with a mom before. I guess that makes me a rookie in more ways than one.

Reaching into my locker, I tug my shirt over my head, sling my pack across my body and grab my phone. Charlie picks up on the second ring.

“Right. Perfect bar time. They serve food there and everything.”

“Is this about a woman?” she guesses.

She groans. “You just got here.”

“I know, but there’s this girl. No, woman.” Neither sound right. She’s a mother but there’s a sweet innocence about her that made me think she was young—younger than me, at least.

“I don’t even want to know. Go by yourself.”

“She’s…skittish.” There was a wariness in her eyes. She’ll be more comfortable around Charlie. Besides, Charlie’s new to town and could use a friend.

“Then leave her alone.”

“Really?” I hear a rustle. “I’ve never heard you say that about a woman.” I’ve piqued her interest. “Give me five minutes. Where is it?”

I give her the address. “It’s a dump,” I warn. “And, the food’s probably bad. It smelled rank there yesterday.”

“I love how you’re giving me the real details after I’ve agreed to come.”

I shrug even though she can’t see it. “You’d find out the truth soon enough. Besides, it’s easier for all of us this way. You’d want me to recite every single detail when I got home.”

“This is true,” she agrees. “Hang up so I can get ready. I want to look good for your girl.”

We both know that there’s not a girl alive that can say no to me.

“MAYBE WE SHOULD LEAVE,” CHARLIE WHISPERS IN MY EAR

I didn’t have to press the owner for the new waitress’s phone number. She was rushing around when Charlie and I arrived. An hour and a half later, she’s barely taken a moment to breathe between filling pitchers, delivering food, wiping down tables while the only other waitress in the place is flirting with a table of players. Someone across the room shouts for a refill. I shoot a glare at the lazy waitress, but she’s too busy shaking her tatas in front of a couple of my teammates.

I push back my chair to go and grab the unhelpful staff, but Charlotte drags me down.

“Because you’ll embarrass her.”

“Would you want Lainey to come into your workplace and yell at your teammates?”

That image makes me wince. Reluctantly, I drop back into my seat. “What can we do?”

“For Lainey? I think we just need to come here a lot. We’ll order lots of stuff and leave big tips. Not obscene ones that will make her feel bad, but like twenty-five or thirty percent. Encourage your teammates to do the same.”

I nod slowly. “That’s a good plan. Occasionally, I can throw in a big tip.”

“Like after a game?” Charlie drums her fingers on the table while she plots. “That makes sense,” she concludes. “We can chalk it up to super- stitions.”

“I don’t have superstitions.”

I shoot a frown at Charlie. “Why not?”

“Let’s review what you told me about her. You met her yesterday when she showed up at Stacks with her child. Her bag was full of kid stuff and her washrags had holes in them. You played with her child while she went in to fill out an application. After that, you watched her walk to the bus stop.”

“Yeah? So what about it?” I take another sip of my beer and surrepti- tiously watch Lainey as she rushes to pour yet another beer. A bell from the kitchen rings. My girl hops to and grabs the food, which she delivers while it’s still hot. She does all of this with a smile on her face. I hope to hell she’s getting tipped well. I wonder if it’d be obvious if I went around and laid a twenty on every table.

“Are you ready to be someone’s dad?”

I nearly spit out my beer at Charlie’s words. “What in the hell did you just ask?”

Charlie purses her lips together. “Exactly. This is a mom. She’s not a groupie. She’s not a social media hookup. She’s not an easy lay. She’s obviously working this job to support her kid. Don’t go after her unless you want to be in a serious relationship.”

I wait for Charlie to laugh and say she’s kidding, but she sits there with her arms folded across her chest and a serious expression on her face. My smile dies off as her words settle in.

“I’m a rookie, Charlie. The only serious relationship I’m going to be in this year is with my team.”

“I know that. I’m here to make sure that you don’t have any distrac- tions, right? And Lainey and her child are a big distraction, if you treat them right. And if you don’t treat them right, then you’re not any better than the waitress over in the corner who isn’t doing her share of the work. It isn’t fair.”

My dick says fuck fairness. “Have you thought that maybe she needs to have something in her life that isn’t serious? I can show her a good time. Give her some nice gifts. Take her kid out. She probably doesn’t want a commitment. It’s a new age, Charlie. Women can have sex just for the sake of sex.”

“Then go after those women, Nick. Lainey isn’t that type of girl. At least, not right now she isn’t.”

“How do you know? You haven’t even met her.”

“She’s tired, Nick. Look at her face. I mean, really look at her. Not just her beautiful body or her gorgeous features, but look at the exhaustion that’s in her eyes. She wants to go home. She doesn’t want to have to deal with a rich playboy whose only concern is whether he’ll get his hands on a small leather ball.”

Using my beer as cover, I do as Charlie orders and examine Lainey’s face. The bright smile on her lips is strained at the corners. Faint lines crease her forehead. Her shoulders hang low as if the entire continent is resting on them. I think back to yesterday and the tears that clung to her eyes as we put the scattered belongings back into her bag.

It was her vulnerability that called to me, but it’s that same delicate- ness that means I need to stay away. Charlie’s words sting, but only because she’s right. I’m not ready for a serious relationship. I need to focus on my career. That takes one hundred percent of my attention. Being a family man? It doesn’t fit into the picture I’ve in my mind.

With a deep exhale, I get to my feet and toss a large bill on the table. Charlie is about to object, but I put a hand over hers. “Let me at least do this.”

Because I can’t do anything more. 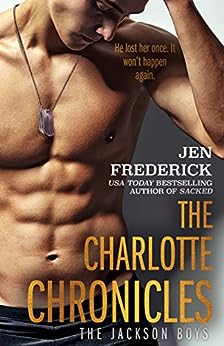 Charlotte Randolph was only fifteen when she fell in love with her best friend’s gorgeous older brother—but she wasn’t foolish enough to hope he could ever love her back. Nate Jackson always viewed her as a pesky kid…until the day she got sick. The one bright spot during her illness? He realized she was all grown up. But just when she allows herself to believe that dreams can come true, Nate disappears from her life, taking her heart with him.

Nate knows he lost more than his best friend when he deserted Charlotte to enlist in the Navy. He thought he was doing the right thing, sparing the girl he loves from the shame and humiliation of his actions. Nine years later, it’s time to right his wrongs. He returns home determined to win back his first love…only to find that Charlotte’s moved on without him.

But if there’s one thing that being a Navy SEAL has taught Nate? Never give up, even when all hope seems lost. And Nate’s never going to give up on Charlotte. Ever.