Karina Halle, the New York Times bestselling author of Discretion, lifts the veil off a privileged family dynasty to reveal a wealth of secrets and dangerous obsessions. 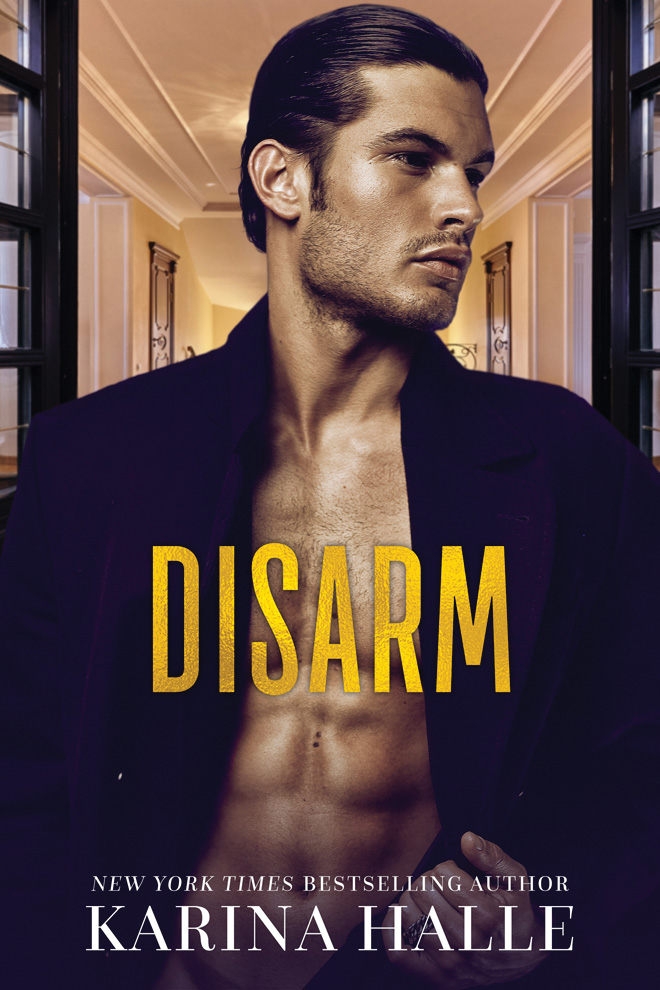 Seraphine Dumont seems to have it all: she’s gorgeous, brilliant, and part of one of France’s most illustrious dynasties. But underneath the facade, Seraphine struggles to hold it all together. Besides grieving her adoptive father’s suspicious and sudden death, she also shares a tenuous role in the family business with Blaise, her in-name-only cousin. As tumultuous as their history is, he may be the only member of the deceptive Dumont family she can trust.

Seraphine is a temptation Blaise can’t resist. The torch he’s carried for years still burns. It’s his secret—a quiet obsession just out of reach. Until his brother demands that he spy on the increasingly cagey Seraphine, whom their father considers a dispensable Dumont outlier. But the more Blaise watches her and the closer he gets, the more he sees Seraphine may have every right to be suspicious. And she could be the next one in danger—from his own family.

As blood runs hot and hearts give in, Seraphine and Blaise have only each other. But can their love survive the secrets they’re about to uncover?

“We can never be together, Blaise,” Seraphine says, like frustration is rolling through her. “I know you understand that.”

“No,” she says and suddenly gets up to her feet, walking out of the room. “No. I can’t do this. I can’t handle this,” I hear her cry out as she heads down the hall.

I get up and run after her, grabbing her by the arm and pulling her right up against me, and she opens her mouth to protest and then my mouth is on hers, swallowing her words.

I kiss her with everything I have, every bit of anger and frustration and the years of lust and pining and wanting. I should be more gentle after the night she’s had, but I can’t help myself; in fact, I think I’m seconds from turning into an animal as I hold the back of her head and press my hand at the small of her waist, keeping her pressed as close to me as possible.

Her tongue slides across mine, hot and fevered and—

She pulls back, gasping for breath, and slaps me across the face.

“What the hell is wrong with you?” she says. “What are you doing? What am I doing?”

Her face is red with anger, perhaps even shame. I mean, my cheek is stinging from her powerful wallop, but even so, I expected it. She’s always been the type of woman to put you in your place. But I didn’t expect her to slide so easily back into hating me.

“The only thing I’ve been dreaming about, Blaise, is getting justice for my father. That’s it. That’s all that matters. And as far as I’m concerned, you’re no better than the rest of them.”

Anger pokes at me, building up inside. “Hey,” I say, my inflection razor sharp. “I risked my neck tonight for you. I saved you from a bad situation. And more than that, I let you know the truth. I chose you over my family.”

“And I’m choosing not to trust you,” she says. “You’ve given me no sign over the years that I mean anything to you at all. Why should I believe you now? Why do that when it might derail everything I’m working on?” Something comes over her, a flash in her eyes, as she’s realizing something. “This is all a setup, isn’t it? This is just something that Pascal is having you do, just like you followed me. You’re supposed to tell me all this nonsense about wanting me and staying celibate like some joke and waiting for me, and it’s all a lie to get my guard down. If you’re telling me I’m in danger, it’s because you’re putting me there.”

I knew she’d go this route at some point, but even so, it stings. “That’s not it at all. Seraphine, please, I’m serious.”

“You just want me to back off because I’m close to the truth,” she says, shaking her head wildly as the idea takes over. “For all I know, every single thing this evening that’s come out of your mouth has been a complete lie, all to throw me off.”

I run my hands down my face, trying to squash my frustration. I knew this was coming, and yet that tiny coal of hope was always burning inside. “That’s not true,” I mutter into my hands, but I know when she gets like this that there’s no changing her mind.

I look up to see her opening the door and gesturing for me to hurry up.

“You’re making a big mistake by not trusting me,” I tell her.

I almost laugh. “You will see me again. At work tomorrow.”

“Right. I almost forgot that you’re taking over my job.” She runs her fingers under her eyes and sighs so defeatedly that leaving her feels like a crime.

“Just go,” she says quietly, holding open the door and looking away, like she can’t be bothered to face me.

“You know where to reach me, if anything happens,” I tell her as I walk past and out into the hall.

“If anything happens, you’ll be the first one I’ll blame,” she says to me.

Before I can say anything in response, she closes the door in my face.

1. To start off, can you tell us a little about your main characters from Disarm. Seraphine and Blaise have quite a history (not to mention they share the same last name!)

Seraphine and Blaise Dumont are (gasp) cousins. But not to worry, they aren’t blood-related. Seraphine is actually from India and was adopted by Ludovic Dumont when she was a young girl. Even though she was brought into the “nice” side of the family, she has always had trouble fitting in. Her looks, her accent, the fact that she was born poor and discarded like trash, gives her a very different perspective to life than her affluent family. This POV has colored her into the very outspoken, vibrant and feisty woman she is today – she is definitely one of my favorite female characters I’ve written.

Blaise, of course, belongs to the bad side of the family, though there were hints in the first book, Discretion, that he’s not as bad as you would think. In fact, he’s a lot like Seraphine, a bit of an outcast and the black sheep of his family. As we read Disarm, we also discover the history that Blaise and Seraphine have together which sets up for the angst, tension and hate for each other that they have in the present day, especially as Seraphine thinks Blaise has something to do with her father’s death.

2. They live in a world of privilege that most of us cannot fathom. What are the biggest pluses and some minuses of living with fabulous wealth?

The biggest plus is the material things: houses, cars, clothes, jets, vacations. You name it, they have it. You would also think a great deal of freedom comes with money too and it does but with that sort of wealth, it makes you go to great lengths to keep it. So that freedom still ties you to the wealth, in maintaining it and getting more of it. Of course, it breeds some pretty out of touch and unscrupulous characters, too, and you can never know who to trust when your world (and family) revolves around money instead of love.

3. What about Blaise makes him totally unique and different from all other book boyfriends?

The torch he has carried for Seraphine for so many years. This man is the epitome of yearning and pining for someone you can’t have, more so than most book boyfriends you’ve come across (and I won’t spoil exactly how but you’ll find out in the book just how secretly devoted to his cousin he is). He’s also an anti-hero, a man who has done some crooked stuff but still tries to do the right thing, even if it comes at the expense of his own family.

4. Seraphine has faced many difficulties during her life, but one of her toughest challenges is thinking Blaise abandoned her. How does she deal with this heartbreak?

She deals with it the way that Seraphine deals with any hardship—she tucks it away deep down inside and rises above it. She’ll force herself to be strong – her pride is very powerful – and she’ll trick herself into thinking she never cared about him to begin with. It’s much easier to paint Blaise with a villainous brush, that way it doesn’t hurt so much.

5. Extreme events are said to bring out a person’s true character. What harrowing situations do Seraphine and Blaise get entangled in and what does this say about them?

There isn’t anything more extreme than fighting for your life, and the two of them have had to do that in this book. Literally. But they willingly walked into those situations as a way to put an end to the tangled web they’ve been caught in. It says they would rather face it and fight than flee. This is especially true for Blaise, who, at the end of the book, choses to confront his loved ones face to face, even if it potentially means making some difficult choices.

6. What scene from the book do you think readers will enjoy the most and why?

Personally, I love the scene at the end, a nail-biting showdown between Blaise and his brother Pascal (and his father, too). That was a blast to write and read, I basically just watched it all unfold in my head and it had my heart pumping as if I was watching a movie. It’s DELICIOUS. Romance-wise, I think the flashbacks are pretty special, particularly their first kiss in Italy. There was something about that scene that felt so real.

7. It is often said that writing is re-writing. What were some things that didn’t make it into the book that you were hoping to add?

Nothing. It’s all in there, baby! If anything, scenes were added during edits.

8. What did you learn about yourself while writing this book?

I learned a lot about Muay Thai fighting moves haha.

9. What do you want readers to take away from reading this book?

That family isn’t just through blood, and that sometimes in order to do the right thing and be your own person, you musn’t be afraid to stand up to your family, even if it means tension or separation down the line.

10. Who is the next Dumont on your list to receive their own story?

The infamous Pascal. And believe me when I say, this villain’s story will both wow and win people over. His book is even more thrilling and dramatic than Disarm and I can’t wait for everyone to read it!

Karina Halle, a former travel writer and music journalist, is the New York Times, Wall Street Journal, and USA Today bestselling author of The Pact, A Nordic King, and Sins & Needles, as well as fifty other wild and romantic reads. She, her husband, and their adopted pit bull live in a rain forest on an island off British Columbia, where they operate a B&B that’s perfect for writers’ retreats. In the winter, you can often find them in California or on their beloved island of Kauai, soaking up as much sun (and getting as much inspiration) as possible. For more information, visit www.authorkarinahalle.com/books.