We’re celebrating the release of DRUMMER GIRL by Ginger Scott!

One-click your copy on all platforms today! 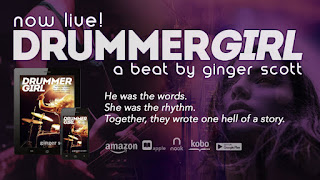 Arizona Wakefield was a beat without a melody. Living a half-breathing life in a half-finished neighborhood with parents who always wore half-hearted smiles, the high school senior only had one thing that let her color outside her family’s perfectly drawn lines—her drums.

Jesse Barringer was a song without a chorus. The son of a washed-up rock star who’s also one hell of a deadbeat dad, he was given two things from his father—musical genius and a genetic link to the bipolar disorder that drives him mad.

One night in a garage at the end of a cul-de-sac in the middle of a bankrupt California neighborhood, Jesse’s melody found Arizona’s rhythm. An angry boy with storm-colored eyes found a blonde angel in Doc Martens with missing lines in her own story. Where her rhythm stopped, his words took over, and together, they wrote one hell of a story. 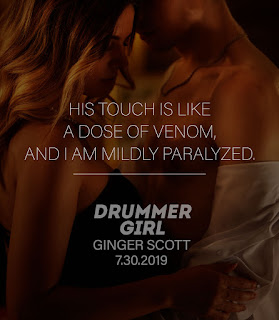 “That’s the first time I’ve played that song. I like it. We should add it to our set,” he says, pulling the strap from around his neck before setting his guitar at the foot of his bed. “What do you think?”

He twists so our knees are touching and our shoulders are squared.
“I think you’re a showoff, one. And two…I totally think we should close with that at our gig. People love retro shit like that at shows.” I don’t really know what people like at shows because the only kinds I’ve ever been to have been for high school marching nerds or jazz geeks. I probably don’t even deserve to utter the word gig yet. I’m a gig virgin. I do know movies, though, and if this life was a movie, our band would close with that.
Jesse’s eyes linger on my face, making me warm.
“Okay then,” he says, finally. “And I’m not a showoff.”
His lips pucker with his smirk and mine follow suit until a laugh seeps through.
“You so are!” I shove at him playfully, and his hands wrap around my wrists and shove back gently but don’t let go.
“No, I’m a great example. That’s a totally different thing,” he says, pulling me toward his chest until my fingertips meet the hard surface of his pecs under a well-worn white T-shirt.
“I’m pretty sure it’s just a synonym for showoff how you’re using it. In fact, now you’re just being arrogant!” I gripe back through laughter, a wry smile playing at one side of my mouth. Jesse remains quiet, though. His head leaned a tick to the right. My lips vibrate with this sudden change in atmosphere, and without even helping myself, I bite my bottom lip. There is just enough light in the room to see these small things we’re doing, these…signs. At least, I’m giving a sign. I hope I’m not imagining Jesse’s.
At least three full breaths pass between us without words. I count mine, and I guess how many he takes because really, I can’t see much beyond the dark centers of his eyes and the top curl of his lip. I wait for him. Even though I’m dizzy and happy and excited, I don’t want to be eager and desperate. I wait for him to move closer…to do something.
I wish for him.
“Would it be okay if I kissed you now?”
Teasers: 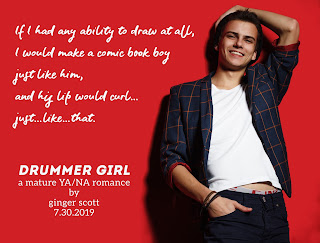 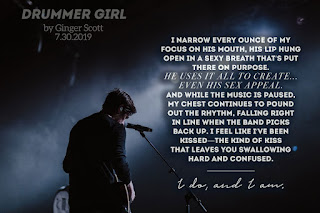 Ginger Scott is an Amazon-bestselling and Goodreads Choice Award-nominated author of several young and new adult romances, including Waiting on the Sidelines, Going Long, Blindness, How We Deal With Gravity, This Is Falling, You and Everything After, The Girl I Was Before, Wild Reckless, Wicked Restless, In Your Dreams, The Hard Count, Hold My Breath, and A Boy Like You.

A sucker for a good romance, Ginger’s other passion is sports, and she often blends the two in her stories. (She’s also a sucker for a hot quarterback, catcher, pitcher, point guard…the list goes on.) Ginger has been writing and editing for newspapers, magazines and blogs for more than 15 years. She has told the stories of Olympians, politicians, actors, scientists, cowboys, criminals and towns. For more on her and her work, visit her website at http://www.littlemisswrite.com.

When she’s not writing, the odds are high that she’s somewhere near a baseball diamond, either watching her son field pop flies like Bryce Harper or cheering on her favorite baseball team, the Arizona Diamondbacks. Ginger lives in Arizona and is married to her college sweetheart whom she met at ASU (fork ’em, Devils).