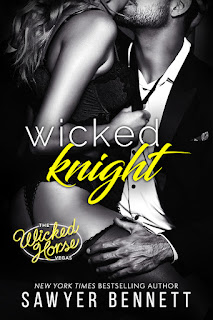 He never wanted to be anyone’s hero…

Asher Knight is tall, dark, and wickedly handsome. He’s also irrevocably broken. Submerging himself in long hours at work by day and debauchery at The Wicked Horse by night, Asher uses work and play to numb the pain and guilt he feels over the death of his wife. What isn’t satisfied with one will surely be resolved by the other. At least that’s how he’s survived the last few years.

Hannah Madigan works three jobs just to make ends meet. Beat down by life, not to mention a cheating husband who was unfairly awarded custody of their daughter, Hannah is determined to make a better life for herself and get her kid back. But with pressures mounting and one costly mistake that leaves her owing Asher a huge debt, Hannah is as close as she’s ever come to throwing in the towel.

She’s given a golden opportunity…

Determined to stay the course by any means necessary, Hannah accepts an unusual proposal from Asher. He’ll give her a job. She’ll give him her body. Sounds easy, right? Until she realizes she needs his help more than she’s willing to admit. And he finds her adding to his life in ways he never wanted to accept.

This wicked knight may just learn that sometimes saving someone else means allowing yourself to be saved in return.