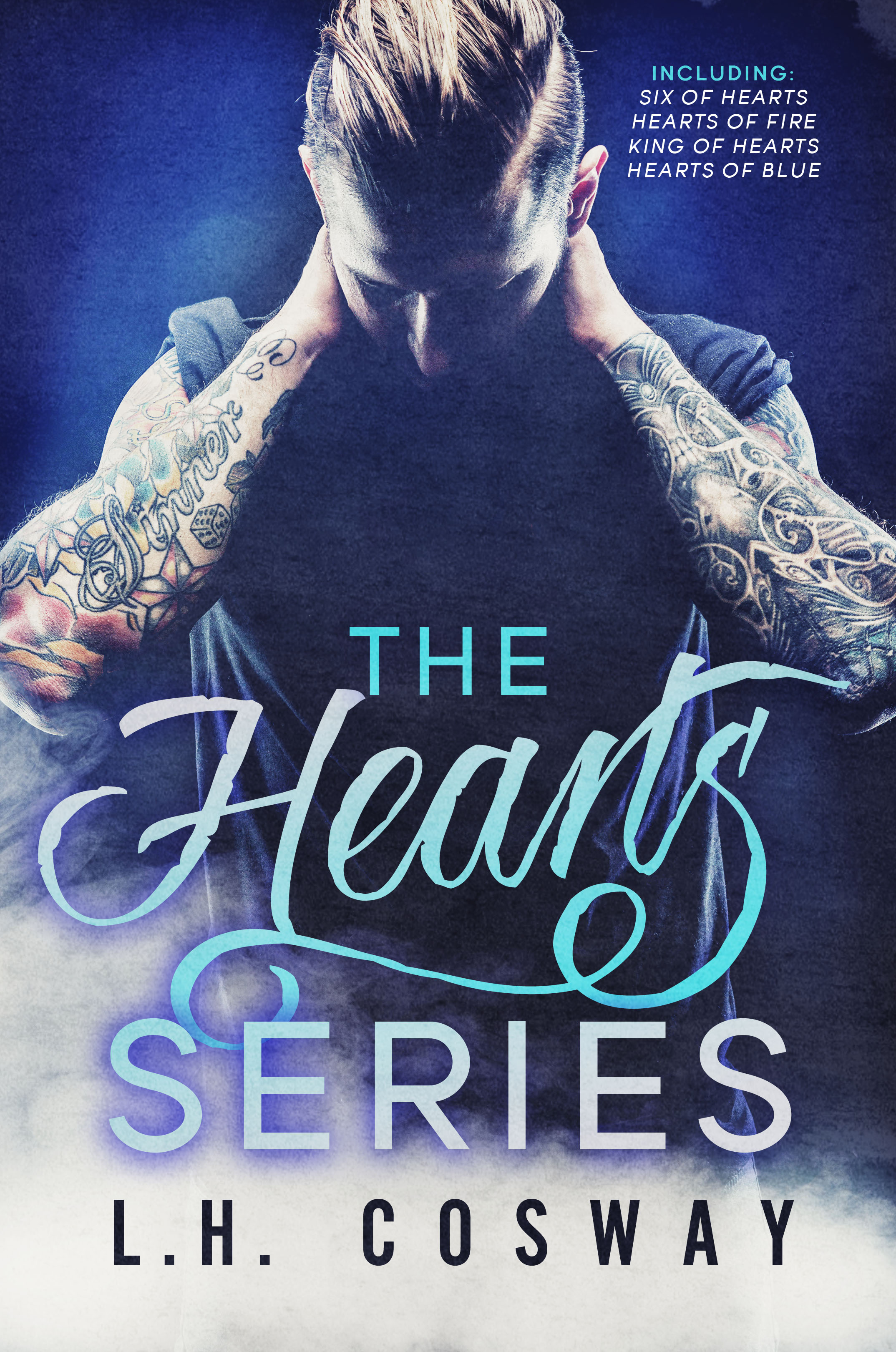 Get the first four books in L.H. Cosway’s Hearts series, plus the BRAND NEW bonus novella, Cross My Heart for only .99¢!

I think in triangles. You think in straight lines.

I show you a table and make you believe it’s a chair.

Smoke and mirrors, sleight of hand, misdirection. I trick and deceive.

But most of all, I put on a good show.

The world thinks I killed a man, but I didn’t. Bear with me. It’s all a part of the plan.

She doesn’t remember me, but she’s the reason for everything. She’ll be my prize at the end of all this – if I can hold onto my willpower, that is. Maybe I’ll slip up a little, have a taste, just a small one.

So go ahead and pick a card. Come inside and see the show. Look at my hands, look so closely that you can’t see what’s happening while you’re so focused on looking. I’ll be destroying your world from right here in the spotlight.

You’ll never see me coming until it’s too late.

I’ve only got one heart, and after I’ve pulled off my grand deception I’ll hand it right to her.

So, sit back, relax, and let my girl tell you our story. You’re in for one hell of a ride.

**Suitable for readers 18 years and over. Contains sex scenes and adult language.**

My house burned down when I was just a boy, robbing me of both my parents.

Now I breathe fire, eat the poison that almost killed me.

Crowds come to see me night after night. Men for the spectacle, women for the thrill. I’m an oddity to be stared at and desired. With each flame I spit, I risk my life.

I wear scars on my body that will never go away, but the scars inside my head are far more difficult to overlook.

My brother doesn’t know me, and if I have it my way he never will.

Life was going exactly the way I’d planned until Lille came along. She wanted to run away with the circus, have an adventure, but this world was never meant for her.

We were fashioned from different cloths, never intended to mix. So I watch her. I try not to touch, even when her eyes invite me.

Join us in the Spiegeltent and let us give you a show. Allow my Lille to draw a picture for you in paint and sweat and skin.

The truest love is always the hardest to let in.

**This is a standalone romance that tells the story of Jack McCabe, Jay Fields’ long lost, presumed dead brother. It is not necessary to have read Six of Hearts in order to enjoy Hearts of Fire.**

Welcome to the City, London’s most prestigious square mile, where finance reigns and Oliver King is a rising prince.

I used to rule the world.

I liked money, and power had its advantages, but what I really wanted was to excel, to surpass the men who came before me. I never cared much for love and romance until I met Alexis.

I could feel it the very moment she walked into the interview, with her outspoken charm and vivacious personality. She cast all the others in shadow, made me laugh when life held no humour. Our friendship should have remained professional, but it wasn’t long before the lines started to blur.

You know what they say about the best laid plans of mice and men? Well, I never foresaw where my plans would lead, and only in my darkest hour did I finally see the light…

You can have all the money and prestige in the world and still be the poorest man alive. And love, well, I hate to use a tired old cliché, but love can be the thing that truly sets you free.

***King of Hearts is standalone romance that tells the story of Oliver King, first encountered in Hearts of Fire. This is the third book in L.H. Cosway’s Hearts series.***

She upholds the law. He breaks it.

In not-so-fair London, where we lay our scene

From gun crime to petty theft

Where family is blood and survival makes hands unclean

In this place, we find two hearts who should be foes

And yet, amidst the turmoil their love still grows

Misadventure abounds and the divide will bring them strife

But with luck, death doesn’t always mean an end to life

Hearts of Blue is a standalone contemporary romance that tells the story of star-crossed lovers, Karla Sheehan and Lee Cross, a police constable and the thief who steals her heart.

Seduce the teacher.
Meet the cousin.
Make a deal.
Steal the painting.

A widow at just twenty-eight, love is something Andie hasn’t considered a part of her life for a very long time. However, when lingering touches turn to whispered words and hot, searching stares, she begins to wonder if maybe she should take a leap of faith.

But Stu is in her class for a reason, and it has nothing to do with love. He’s there to burrow his way into her life and repay a debt, otherwise his family will suffer. Andie is the first person to show him true kindness since he left prison, and though he doesn’t want to mislead her, he doesn’t have another choice.

Before long, Stu can’t tell whether or not he’s acting anymore, and his feelings for Andie could throw all of his carefully crafted plans into complete and utter disarray.

***Thief of Hearts is a contemporary romance and can be read as a complete standalone.***

Iris Garrigan has nothing.

Well, that’s not entirely true. She has her trusty Doc Martin boots. She has her Bowie obsession. And she has the stray cat that sneaks into her bed and keeps her company at night – it’s a quid pro quo relationship. The cat gets a warm body and she gets something alive beside her when she would otherwise be alone.

She also has a job. Sure, washing dishes hardly has her rolling in dough, but with no permanent abode it’s the best she can do. She knows her new boss only lets her work in his restaurant out of pity, but she isn’t above cashing in on a little human compassion if it means she can survive to live another day.

Everything is going fine until Liam Cross starts to take notice of her, poking his newly minted police badge where it doesn’t belong. And if he doesn’t quit soon her not so legal living situation could find her in hot waters. Little does she know, Liam isn’t just being nosy, he’s trying to help. Iris has no idea that he’s been watching her for months, and that he’s completely enamoured with her strange and peculiar ways.

When Liam discovers her secret Iris has two options: stay and face the music or run for the hills.

***Cross My Heart is a contemporary romance novella and tells the story of the youngest Cross brother, Liam Cross.***

Pre-Order your copy of Cross My Heart with The Hearts box set!

Cross My heart will be published separately on iBooks on January 31st.