Of the many books being published this week these three books are the ones that I am most excited to read or to share my reviews with you.  Make sure to check back throughout the week in order to see my reviews and other book news, and head over to my Facebook page for your chance to win an e-book copy of one of the many new releases being published this week! Also, don’t forget to comment on any post throughout the week in order to enter to win any eBook from your own TBR ($5.99 Limit). Each comment is an entry, so make sure to comment multiple times. 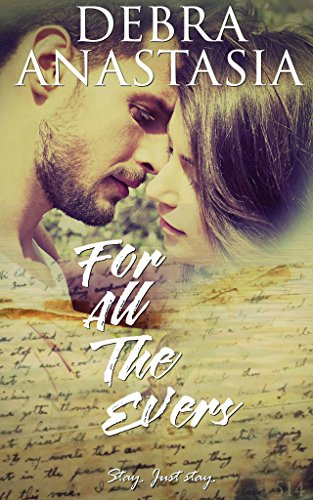 My first experience with Debra Anastasia’s writing was with the book Booty Camp (completely hilarious and worth a look if you haven’t read it), and I found her writing style to be engaging and for this romantic comedy to be fun and entertaining.  For All the Evers takes on a more serious, more dramatic note with the two lovers spanning time.  I am excited to see how this one plays out!

Fallen Billow should be in college like most of her friends, but instead she’s raising her brother and working as a housekeeper at a vintage local hotel. It’s back-breaking work, but not nearly as challenging as fending off unwanted advances from the hotel’s owner.

Thomas McHugh is fighting for our country, across the globe and decades before Fallen Billow was even born. So there’s no way they’re soul mates. There’s no way he can be desperate to see her, hold her, kiss her. Except there is.

Is it a dream when he inks his name on her skin? Is it a delusion when she puts her hands on his face and says she loves him? Nothing has ever felt more real.

Fate has etched paths for Thomas and Fallen that even time cannot touch. A Purple Heart proclaims Thomas’ valor and bravery. And his death. But Fallen dares to dream of the impossible. She wants Thomas to stay. Just stay.

A tribute to all who have served our country, this novel honors the impossible beauty of love and the endless power of hope. Come open your heart and celebrate the many facets of bravery with Fallen and Thomas.

This will be my first book by Adriana Locke, but I couldn’t resist that synopsis. Hot Athlete. No Strings attached relationship. Strong heroine. I am completely in!  Plus, look at that cover!

I’d like to screw her and her perfect ass.
Dangerous curves.
Sweet smile.
Ryan Danielle Ashley probably even has a game-changing personality.

There’s no denying the chemistry between them. It’s so fiery, it’s undeniable. They partake in it. Enjoy it.
They really enjoy it.
Attraction is not a problem. Nor is their banter, relationship status, or habits. That’s all fine. Perfect, actually.
The problem is as tangled up as their sheets. 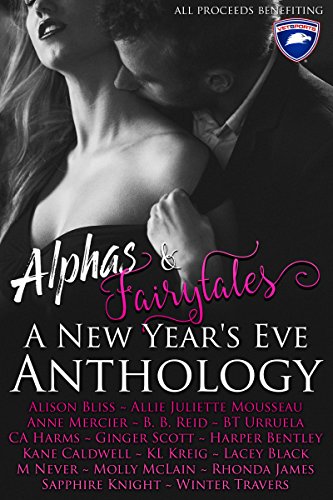 I am a sucker for a seasonal anthology.  It just gets me in the spirit of the season.  Alphas & Fairytales, however, will be my first New Year’s Ever Anthology.  I couldn’t resist this one, though, for two reasons.  One, it benefits Vetsports, and, two, some of my favorite authors wrote stories for it (Ginger Scott, Molly McLain, B.B. Reid).  The other authors on the anthology, while I haven’t read them yet, are sitting on my TBR list, making this book only more enticing.

16 ALL NEW stories of love, lust, and redemption from your favorite bestselling authors

THE MAIN EVENT – Sapphire Knight
New Year’s in Vegas can only mean three things: fighting, f*cking and forever. You ready to party with us?

DUET (ROCKSTAR #8.5) – Anne Mercier
Sera and Cage in Vegas: MMA, a formal gala, and a hot steamy night of sexin’.

FREEING HIS DARK EDGES – Kane Caldwell
Surprising Chase Black is not an easy task but when he opened the little box on Christmas morning to see tickets to one of the biggest MMA fights in Las Vegas on New Year’s Eve, he was shocked. I thought I’d had the reins on our trip but since then, Chase keeps giving me those looks, a smirk that says I’m the one in for a surprise.

AS THE TIDE TURNS – BT Urruela
The war vet bodyguard. The Hollywood starlet. An unexpected threat at the biggest charity event of the year. Can Jason set aside his demons to save Savannah’s life, or will his past get the best of him?

FORBIDDEN ATTRACTION – CA Harms
Maybe it was the adrenaline, the pure excitement from the fight that had me thinking of things I shouldn’t. All I knew was never before had something that was wrong, felt so right.

FORBIDDEN – KL Kreig
There are two of them and one of me. And an irresistible lure between us that is expressly forbidden. Has the gluttony of Vegas distorted our judgment or could there be something else bigger at play?

CLOSE ENCOUNTERS – Alison Bliss
Brick Davenport is the quintessential billionaire badboy. He’s also my ex-fiance and the man who taught me the first rule of business–always protect your assets. On New Year’s Eve in Vegas, I’ll have to do just that, because Brick’s on a mission…for my heart.

Chase Hammond and Shane Laughtner have finally found the woman who completes their Trinity, and this New Year’s Eve, the two have crafted a plan to make their trio permanent. Bright lights, a buzzing atmosphere, and an over indulgence of passion.

DICED – Ginger Scott
The last time Mia Stone saw Jamie Augusthill, he was being hauled away from her father’s five-star restaurant in handcuffs. Now, the supposed “new man, still brilliant chef” is standing in HER kitchen. Worse yet, he’s the only person who can pull off this impossible New Year’s Eve feast. He’s also the only man to ever break her heart.

BLINK – Molly McLain
I took her for granted and she walked out of my life. Now, two months later, she’s back…on another man’s arm. I never expected I’d spend New Year’s Eve without her, and I’ll be damned if she gives that midnight kiss to anyone but me. After all, she’s my wife.

A WILD CHASE – BB Reid
Mila Hunt has a big problem, and his name is Chase James. The arrogant asshole happens to be her boss, and after an embarrassing mistake at a gala, he decides her punishment should fit the crime. What he has in store for her she never thought she wanted, but she could never say no to him either…

ROCKIN’ THE SUITE – Rhonda James
Sebastian Miles in a man with a plan. Recently married, he’s been on tour with his band, Paradox, for the last four months, leaving his young wife, Brooke, alone at home. He has thirty-six hours before heading back out on the road; plenty of time to fly off to Vegas and prove to her he’s still the same romantic guy she fell in love with. The stakes are high, but he’s up for the adventure. After all… What happens in Vegas stays in Vegas. Right?

A POWERS PLAY (A POWERS THAT BE SHORT) – Harper Bentley
Gable Powers had loved keeping me off-balance from the moment we met—dirty words whispered in my ear that made me tremble, a spectacular tattooed body that had my own craving his, a secret revealed that only made me love him more. Even his proposal had taken me by surprise when he got down on one knee in the shower. But now it’s my turn to shock him at midnight on New Year’s Eve in Vegas, and it’s going to be awesome.

CRAVED (BOUND TOGETHER 2.5) – Lacey Black
Tara Hunter and Scott Dixon have wanted each other for years, but something always keeps them apart – until New Year’s Eve. When Scott and Tara find themselves at a charity gala, the stars may finally align.

Pre-order your copy today for only .99¢!