Of the many books being published this week these six books are the ones that I am most excited to read or to share my reviews with you.  However, I would e remiss in my blogger duties if I didn’t mention that this week there is an honorable mention list.  I mean ten books is way too many to have on my #SoontoDrop list! Right?

These Renegades are something special. They have this allure that I cannot resist. Maybe it is their zealous nature to take risks with their stunts, their alpha ways with their significant others, or their hearts that show their passion for all avenues of their lives, but I love every single one of them, and I don’t see it changing any time soon. What I enjoy most about them is the relationship between the originals. They are a family, even if it isn’t blood. They love and support each other, and they sacrifice for each other without question. There is never any doubt about the family nature of this group, and the plot line that drives this whole series is one that has captivated me, creating immense excitement to see where Ms. Yarros takes this group over the next two books.

The only heart he wants is the one he already broke…

The Renegade they call Nova.

They say a girl broke him once—

That’s why he’s so reckless, so driven, so careless with his conquests.

But I’m that girl.

They can call me his curse all they want.

He and I both know the truth—

He’s the one who destroyed me,

And I’m not the sucker who will let that happen again.

Pre-order your copy of Nova today! 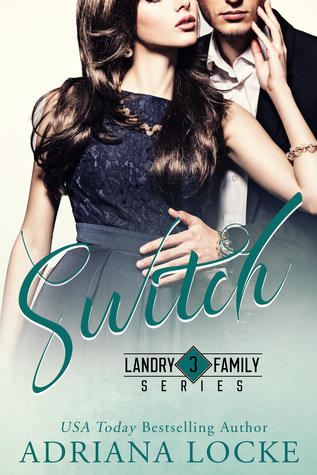 I absolutely fell in love with this family when I read Swing. They are fun and loving, and the men are super sexy.  I was so intrigued by Graham in the last book, so I am super excited to dive into Switch today and see this uptight business man become a little disheveled!

Mallory Sims is late for her first day of work.

After spilling her tea, she discovers she has no gas in her car. Add that her arm keeps sticking to her dress from syrup left on the console of her car, flustered feels like an understatement.

Then she sees her new boss.

Graham Landry is the epitome of NSFW in his custom-fit suit, black-rimmed glasses, and a look so stern her libido doesn’t stand a chance. Being flustered is just the start of her problems.

Her punctuality is only the start of his. With a pink slip in hand, he’s been waiting on his new secretary to show up only to let her go. Then she rushes in with her doe eyes and rambling excuses, smelling like bacon and lavender. The termination paper falls to the side as she falls in his arms.

This is a disaster in the making. Not because of his pinpoint exactness or her free spirit, but because when they’re together, the sparks that fly threaten to burn the whole place down.

SWITCH WILL BE AVAILABLE IN KINDLE UNLIMITED ON RELEASE DAY!

This will be my first book by K.L. Kreig, but I have heard fantastic things about Black Swan Affair. So not only I was intrigued by this new story due to the buzz surrounding her last novel, but I was also intrigued by the short story that appeared in the New Years Eve anthology.  It was so hot, completely steamed up the room, so I was anxious to get my hands on the full story.  I will also be diving into this one today!

Full review to come on Friday during the blog tour!

We all have one.

That magic number that will get us to agree to do anything, be anything.

Don’t sit on your gold-plated high horse and say you don’t because you do. Everyone does. Each of us has something we covet enough that we’d sell ourselves to have it.

What’s my tipping point, you ask? Apparently a cool quarter mil will do the trick.

What does one do for 250 large, you wonder? Anything the infamous, gorgeous playboy of Seattle wants. For the next four months I’ll be Shaw Mercer’s arm candy, his beck and call girl, his faux girlfriend. I’ll be his to command, mold, push and pull in any direction he sees fit.

Pre-order your copy of Lost in Between today!

I have been dying for Lance ever since his appearance in Forever Pucked, and Helena Hunting does not disappoint.  His story is heartbreaking, literally making my heart ache for this broken man.  Ms. Hunting delivers a story that he deserves, allowing him to begin to heal, to see the worth in himself, and to see he is worthy of the love of a good woman! Lance is my new favorite Pucked hero! Sorry Randy! It was fun while it lasted, and I will treasure our time together!

***A Standalone novel in The Pucked Series***

I’m notorious for parties and excess. I have the most penalty minutes in the league. I get into the most fights. I take the most hits. I’m a player on and off the ice. I’m the one women with no inhibitions want.

Not because I like the notoriety, but because I don’t know how to be any other way.

I have secrets. Ones I shared with the wrong person, and she used them against me. Sometimes she still does. I should cut ties. But she makes it difficult, because she’s the kind of bad I deserve.

At least that’s what I believed until someone from my past gets caught up in my present. She’s all the good things in this world. She lights up my dark.

I shouldn’t want her.

I should leave her alone.

Pre-order your copy of Pucked Off today!

Emma Chase continues to be a oneclick author for me. Her stories have so much heart, so much love, and they are always beautifully written. She never disappoints, and Henry and Sarah’s story is just another jewel on this author’s bedazzled crown, as it will be a top read of 2017 for me!

Some men are born responsible, some men have responsibility thrust upon them. Henry Charles Albert Edgar Pembrook, Prince of Wessco, just got the motherlode of all responsibility dumped in his regal lap.

He’s not handling it well.

Hoping to force her grandson to rise to the occasion, Queen Lenora goes on a much-needed safari holiday—and when the Queen’s away, the Prince will play. After a chance meeting with an American television producer, Henry finally makes a decision all on his own:

A reality TV dating game show featuring twenty of the world’s most beautiful blue bloods gathered in the same castle. Only one will win the diamond tiara, only one will capture the handsome prince’s heart.

While Henry revels in the sexy, raunchy antics of the contestants as they fight, literally, for his affection, it’s the quiet, bespectacled girl in the corner—with the voice of an angel and a body that would tempt a saint—who catches his eye.

The more Henry gets to know Sarah Mirabelle Zinnia Von Titebottum, the more enamored he becomes of her simple beauty, her strength, her kind spirit…and her naughty sense of humor.

As he endeavors to right his wrongs, old words take on whole new meanings for the dashing Prince. Words like, Duty, Honor and most of all—Love.

I absolutely fell in love with the romantic comedy author duo that is Max Monroe last year with their Billionaire Bad Boys series.  It was funny, sexy, and so swoon-worthy, so I am so excited to get a new book in a new world with new characters. I am sure it will be nothing short of fantastic!

Full review to come this week during the blog tour!

Lola
My name is Lola Sexton, and I’m a sex addict.
Okay…that’s a lie.
Truth is, I’m a serial dater turned dating and relationship columnist for The San Francisco Times. My readers call me Sex. Sex Says.
I love my job.
I love my life.
And I hate Reed Luca.

My name is Reed Luca, and I’m a liar.
Ironically, that’s the truth.
I’m 31, and my occupation is…well, complicated.
My favorite kind of woman comes in all shapes and sizes, but always has a big brain.
I’ve never hated anything.
Lola Sexton hates me.
Luckily, it’s a thin line between love and hate, and with my help, pretty Lola will only be able to straddle that line for so long.