4 Hot Single Dad CROWNS
Piper Rayne’s first book in their new series is fun, entertaining, sexy, and light-hearted.  It is also filled with a cast of characters who only serve to increase the excitement for the rest of the books in the series.
Real Deal focuses on single dad Marcus and Cat Santora.  They have history, and it has caused some walls to be raised by Cat.  Their attraction to each other, however, is unavoidable.  Of course, there are more than just the typical conflicts with the relationship as his daughter Lily is involved.
Marcus is a hero that people will like.  Well, let’s be honest, readers are going to like all of the male characters of the series.  They are single dads raising their kids or kid all on their own.  That only creates some major swoon factor.  Even more than just being a dad, Marcus is a good guy, protective of his daughter, and trying to do what is best for the people he loves and the town he has started to call home.
Cat is ten years younger than Marcus, and she has shielded herself from him in an attempt to protect her already bruised ego.  She is the different one in her family, the “wild-child” and has spent her twenties pursuing what inspires her versus what her parents expected of her.  Her desires to chase what makes her happy puts her in the direct path of Marcus and Lily, and, like his attraction to her, she cannot resist him.
These two from the beginning are attracted to each other.  The dual point-of-view used by Piper Rayne allows the reader to see the fears and issues for both, making their relationship believable.  While the romance progresses rather quickly, the feelings between the two seem authentic. The journey these two take to get to their happy ending is pretty predictable, but the characters, especially the cameo of one of my favorite Modern Love couples, makes it an enjoyable read.
Piper Rayne has created another series that is sure to be a hit.  Who can resist a world of single dads and the women who love them?  It is like perfect rom-com gold, and Piper Rayne certainly knows how to deliver.
ARC received in exchange for an honest review. 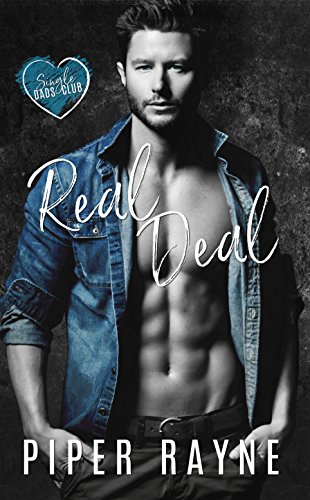 There are at least ten camp counselors currently standing in the water watching the children, and six of them are female. Victor doesn’t understand the epidemic he’s going to have on his hands. The longer I sit there, the more dads find their way down to the lake, thinking it’s an everyday Thursday pickup. To their surprise, it’s a teenage boy’s wet dream. And maybe that teenage boy’s dad’s, too.

Caterina is laughing with another female counselor. I never noticed how her cheeks rise into two small apples when she smiles. Nor did I notice the way her hands cover her mouth to stifle a laugh or how she briefly touches the other person’s arm when she’s amused. Damn, I want to pull that reaction out of her.

But all I’ve gotten this week since camp started is a few polite smiles and ‘hello Mr. Kent.’ She hasn’t acted as though I’ve seen more of her than what that bikini she’s wearing reveals.

“What did I miss?” Dane sits down next to me, trying to catch his breath.

“What the hell do you do all day that you can’t be here on time?”

He glances over to me and then concentrates ahead of him. I can’t blame him, we don’t get views like this in Climax Cove very often.

“Does Victor realize he’s giving every dad here beat off material for tonight?” Dane asks. A few of the dads milling about laugh, knowing it’s true.

A small ball of anger begins brewing in my center. The idea of these dickheads thinking about what’s under the blue bikini hugging Cat’s tits gets under my skin. That beat off material is for me and only me.

“And to answer your question, I had to go down to the county for some paperwork.”

Dane’s been doing some heavy renovations to Happy Daze the last few years, expanding and making it a more family-friendly bar and grill during the day.

Both of us continue our conversation as we pretend to watch our children. I can multitask though. My gaze veers to Lily to make sure she’s not drowning, but she’s taken swimming lessons since she was one, so I don’t have to worry too much.

“We can talk about that shit later.” Dane waves me off. “Fuck, this is so not fair. How is my kid getting more action than I’ve seen this week?” He bites his fist, watching Toby and his friends pour a bucket of water over his camp counselor’s head. Her yellow bikini doesn’t exactly hide the fact the water might have been slightly chilly.

Lily looks away from the action in the lake, finds me sitting there, and smiles. “Why do I suddenly feel dirty?” I mumble to myself.

Lily runs from the lake and Caterina says something to one of the other counselors and follows Lily’s path. Our eyes lock, but Cat is quick to shift her focus elsewhere.

“Daddy!” Lily screams and jumps into my arms, soaking me in the process.

I clear my throat so he’ll turn his attention from the lake to my daughter. Dane turns to me, back to the lake, and then realizes why I’m clearing my throat.

“Hey, kiddo. Swim day, huh?” He leans back on his hands, focusing his attention on her.

“Come.” She jumps down from my lap and grabs my hand.

“No, sweetie. I’ll wait until you’re done. Go have fun with your friends.”

She smiles and runs off.

“Damn, a little warning, huh? I’m practically tucking my dick between my legs,” Dane says and shifts in his seat.

“Who’s the dickhead?” Dane asks, head nodding to the lake.

One of the male camp counselors approaches Cat. She laughs at his joke and shakes her head. I don’t miss the way his eyes light up when she puts her hand on his forearm.

“Who?” I pretend my heart isn’t skipping beats from the adrenaline coursing through my system. Just call me a fucking caveman.

“Yeah, okay. Your eyes have been glued to one counselor, in particular, this whole week.”

“I have no idea what you’re talking about.” I glance around to make sure no other parents overheard us.

“Is that how you’re gonna play it?” he asks, turning toward me and raising his eyebrows in question.

I say nothing, watching the dickhead pick up Caterina by the waist, her squealing and him dropping her in the deeper part of the lake. She stands up and now she’s dripping wet in her blue bikini that probably matches the color of my balls.

Once again, I swear her gaze veers over to me as she pushes her hands through her drenched hair. Before I can be certain, she’s concentrating on the kids again. She claps her hands and announces swim time is over for her group.

“Man, your chick is a fun sponge,” Dane says because Toby’s camp counselor is still in a water battle with her kids.

I push off the picnic table to head over to pick up Lily and gather her things.

Say what? Yep, but it’s exclusive to our newsletter subscribers! Believe us, you don’t want to miss this one!!

Who is Piper Rayne?

Piper Rayne, or Piper and Rayne, whichever you prefer because we’re not one author, we’re two. Yep, you get two USA Today bestselling authors for the price of one. You might be wondering if you know us? Maybe you’ll read our books and figure it out. Maybe you won’t. Does it really matter?

We aren’t trying to stamp ourselves with a top-secret label. We wanted to write without apology. We wanted to not be pigeon holed into a specific outline. We wanted to give readers a story without them assuming how the story will flow. Everyone has their favorite authors, right? And when you pick up their books, you expect something from them. Whether it’s an alpha male, heavy angst, a happily ever after, there’s something you are absolutely certain the book will contain. Heck, we’re readers, too, we get it.

What can we tell you about ourselves? We both have kindle’s full of one-clickable books. We’re both married to husbands who drive us to drink. We’re both chauffeurs to our kids. Most of all, we love hot heroes and quirky heroines that make us laugh, and we hope you do, too.