Crave by Dani René will take readers on a trip of forbidden desires and love in a world of sex trafficking and clubs that is not for the faint of heart.

Samael is a dom that excels at what he does.  He trains and forces girls into submission to work at his father’s club.  He, however, has this blend of being a an unrelenting and forthright dom and someone who cares for his submissive. He demands obedience and takes what he wants, but very much wants to take care of those he forces into submission.  Readers will also love that he is willing to literally take on the world for the one he loves.

Angel and Samael first interact when he becomes the dom assigned to train her.  Forced into working at this BDSM club, she is required to learn to submit.  These two are, however, drawn to each other from the beginning, and have instantaneous spark.  Their relationship, however, is far from easy.  She is still required to work at the club and, eventually, offer her services to some very sadistic and lethal men who have zero regard for another person.  Samael has to witness it, as he has very little recourse to remove her. Their love, however, cannot be tamed, and as one would expect, these two must eventually change their present predicament if they intend to remain together. Their journey to freedom is one wrought with danger and seduction, but readers will enjoy the ride.

Crave is the first book in the Forbidden series, and for those who love darker romances, this book is perfect.  It is quick, sexy, and filled with diabolical dirty deeds, making it a great start to a new series.

SYNOPSIS:
Samael
Can love overcome hate?
When I first laid eyes on the perfect little blonde, I didn’t think she’d change my life.
But the first time I tasted her, felt her, took her, I knew she was mine.
I laid a wordless claim because as much as I desired her, I couldn’t have her.
I craved the dark, she filled me with light.
I loved delivering pain, she craved it.
Opposites merged by circumstance.
Hearts melded by passion.
Angel
Can light defeat darkness?
I should have feared him.
Everything about him was drenched in the darkness he exuded.
But one glance into his cobalt eyes, and I knew I was his.
My heart allowed him entry, as did my body. And after the first time, my soul recognized his.
Desired what he delivered.
I craved his darkness, he bathed in my light.
I submitted to his desires, he craved my very being.
Running from him wasn’t an option.
Fate bound us in its intricate pattern.
*This is a dark romance, suitable for mature audiences, 18+ ONLY. Strong sexual themes and violence, which could trigger emotional distress, are found in this story. Certain scenes are graphic and could be upsetting to some. This story is NOT for everyone. Proceed with caution. Discretion is advised. This is book one of the Forbidden Series, but can be read as a standalone. Each book will feature a different couple. There is NO cliffhanger.
— BOOK LINKS — 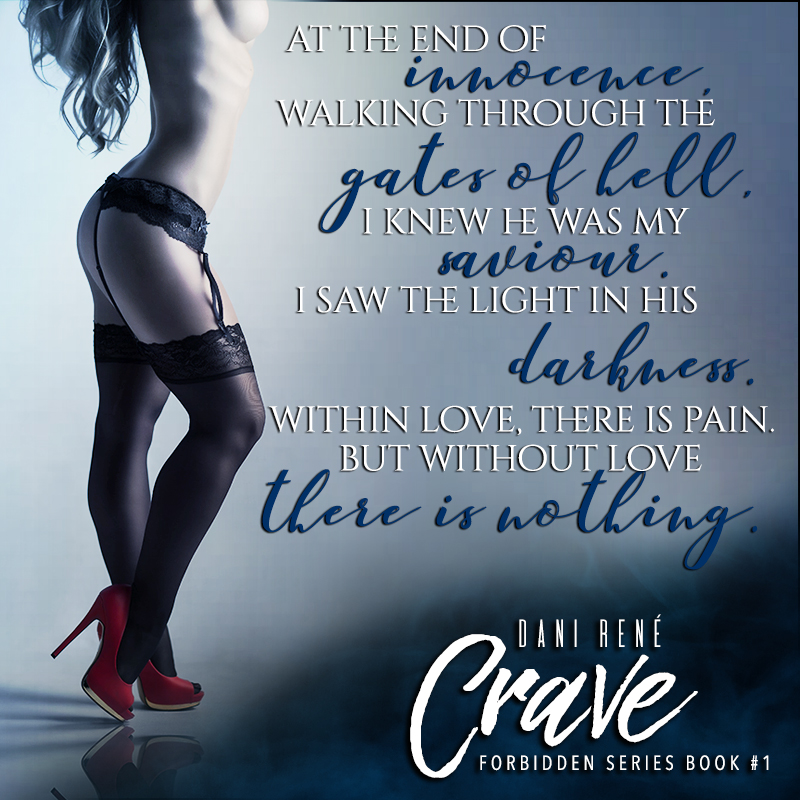 ABOUT THE AUTHOR:
An indie author and freelance graphic designer, Dani’s writing has evolved from short fan fiction stories to full length novels. From sweet and romantic, to dark and delicious, she’s grown from strength to strength and hitting her stride.
On a daily basis she has a few hundred characters, storylines, and ideas floating around in her head. Generally working on two or more manuscripts at a time, she loves the variety of where her writing is taking her.
She’s normally found in the cave with a mug of coffee or a glass of wine whipping up new emotional rollercoasters. You can also find her on social media – Facebook, Instagram, Twitter, and Pinterest.
She has a healthy addiction to reading, TV series, music, tattoos, chocolate, and ice cream. Some of her go to authors are M Never, K Webster, Pepper Winters, KL Kreig, Meghan March, and that’s just to name a few!
Amazon | Instagram | Twitter | Facebook