5 SUBMIT TO ME CROWNS

Marriage Games follows the story of an estranged husband and wife as the husband attempts not only to take back his identity he has suppressed while being with her but also attempt to win back her love.  Watching these two interact, discover new versions of themselves, awaken to their inner desires is completely rousing.  Adam, a dom in his life before marriage, has lost the man he used to be, and in his attempts to reclaim his old self, the reader gets to see the complex man he is.  There is so much conflict within him pertaining to his love of his wife, his need to make her submit, and his desire not to want her to be a be a part of that world.  He is the epitome of a man who has certain proclivities and cravings and is trying to balance them with love.  Through him the reader sees the potential struggles of BDSM but also the rewards.  Diana, Adam’s wife, throughout the novel pushes the limits of her comfort in an effort to reclaim her company from her husband.  Through her character, the reader gets to see a person struggle with their desires that make him/her feel good, sexy, desirable as it may not be accepted by the general public.  Watching her come into submission throughout the novel and at the hands of Adam is incredibly enlightening.  The dynamics of this couple, the push and pull and the emotions and desires, will ensnare the reader’s attention from page one.

The plot of this story really focuses on the rekindling of passion and reconnecting of Adam and Diana.  Adam’s desire to find himself, get Diana to submit to him, engage her in his world is interesting and alluring.  Diana’s development as a character, her acceptance of her desires, and revelation at the end of the book makes for fantastic reading, a truly gripping tale of love and embracing sexual desires, leaving the reader salivating for the next book in the duet.

CD Reiss is one of my favorite writers.  I know that with her books there will be hot and kinky scenes, elements of darker and more depraved acts from the characters, characters who are relatable, and plots that are engaging, but more than that, CD Reiss delivers exeellent writing that grabs my attention from the beginning and doesn’t let go. 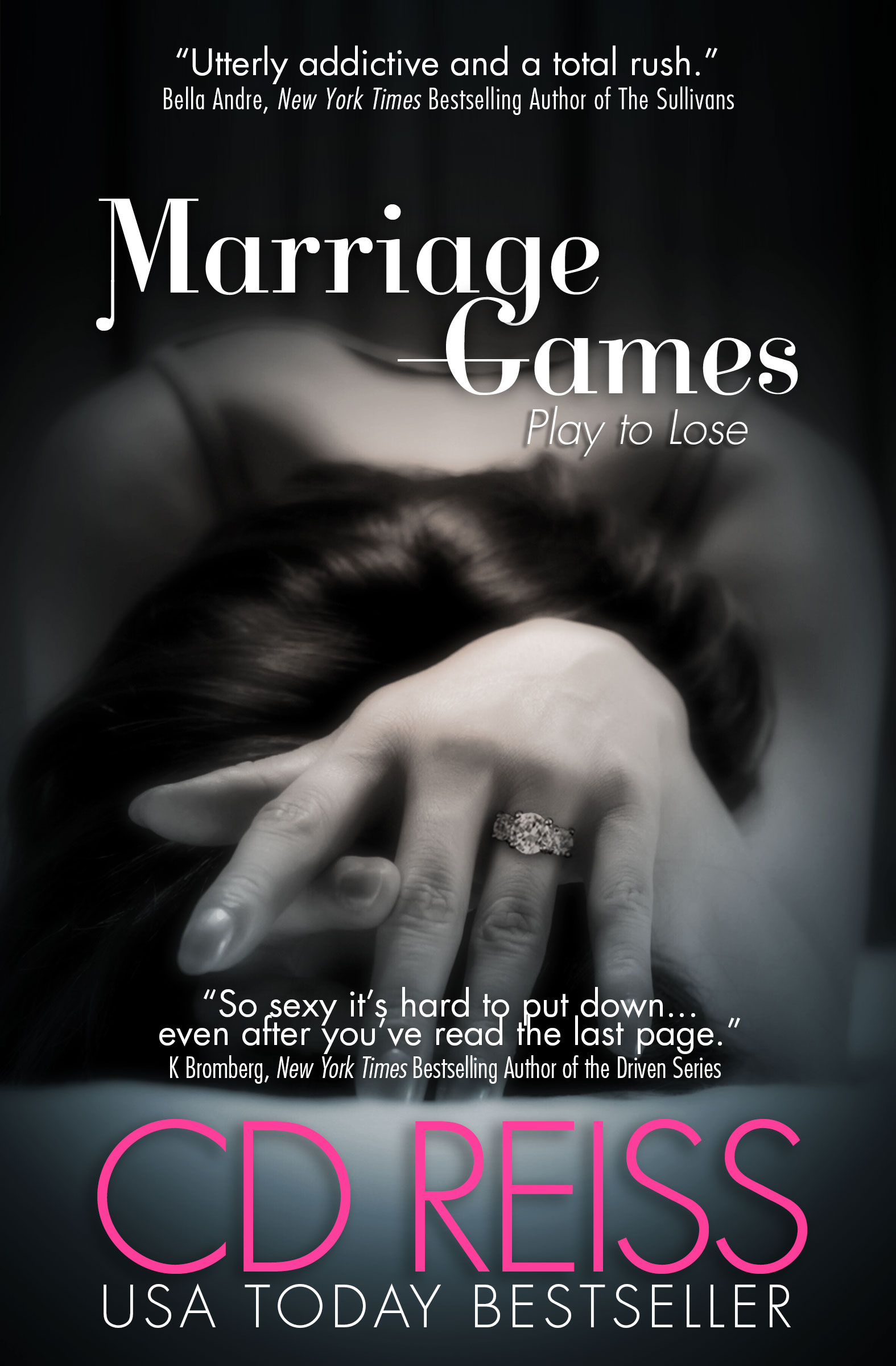 That’s all Adam Steinbeck demands of his wife.

Thirty days in a remote cottage, doing everything he demands. After that, he’ll sign her divorce papers and give her complete ownership of their company.

That’s how long he has to rediscover the man he once was. The Dominant Master he hid when he fell in love with her five years ago.

She wants the business they built badly enough to go to the cottage for a month. Cut off ties to the world and do his bidding. She can submit to him with her body, but her heart will never yield.

She thinks this is his pathetic attempt to repair their marriage.

“Marriage Games is one of the most powerful novels I have ever read. CD Reiss gets into the soul of her hero and heroine and never lets go. A strong, clear picture of the psychological and emotional challenges of a D/s relationship, especially in a marriage. Why it works and why it might not. Can’t wait for the next one.” ―Desiree Holt, USA Today bestselling author 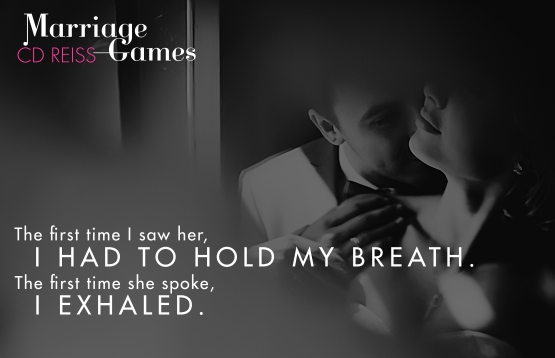 “Pull your skirt up.” I said it without acknowledging the possibility that she’d disobey. It felt good to use those words and that tone. To watch her eyes go to the floor.

“Trust me.” I said it so low she was just within range to hear it. “Five minutes. Then we don’t have to fight over the car.”

I stepped back and set my watch with a beep. It wasn’t about the car for her. The Jag was the least of her worries, but it was a tangible justification.

For the downcast eyes. For the way her breathing changed. Maybe every bone in her body was vanilla. Maybe not.

She laid her hands on her hips.

Pulled up her skirt.

The tops of her thighs came into view then met at the crotch. I was hard already and made no move to hide it. She noticed and stopped moving the skirt.

“Higher,” I said as if telling her how to center a picture over the couch. Higher was where it had to be. It wasn’t a request.

Up it went, revealing cotton underwear in a pink so pale they were almost white.

“Because I’m standing here with my skirt around my waist? Because you told me to? For a car, no less, which is creepy.”

She was so honest. I ached for her honesty.

“You’re not obeying me for an object. You’re obeying me so I do something. Take an action or don’t.”

“You think that’s not weird?”

“No, I don’t. And we have four minutes.” I stepped forward. Part of her discomfort was in the physical distance between us. I’d stepped away so she didn’t feel threatened, but my gaze was keeping her from relaxing. I kept my eyes on hers. I could smell her perfume and feel the shortness of her breath. “Are you turned on?”

Her initial shock and offense lasted only a second before she pressed her lips together and reached down, shoulders angling, hand thrusting as if checking to make sure her cunt was still there.

We have hundreds of bones in our bodies, and sometimes we won’t acknowledge the preferences of the ones that scare us.

I gripped the edge of the vanity and put my lips near her cheek, millimeters from touching her.

“You don’t love me anymore,” I whispered. “But I could always make you wet, and you always came for me. Like our Italy vacation. In Florence. Coming back from that club, in the little alley. Against the wall. I ripped through your underwear.”

Her breathing got shallow and fast.

“I fucked you in the dark, and when you came, you screamed my name so loud all the lights in the apartments went on.”

“That was good.” She turned her face toward mine.

When her lips nearly touched me, I pulled away just enough. “I said I wouldn’t touch you.”

“I changed my mind.”

I wasn’t fooled. Her arousal was talking. I owned her. She’d do whatever I told her. But I wanted something very simple. I wanted her pleasure. “Take the juice from your cunt and rub it on your clit. Make it wet.”

“Do it.” I felt her arm move against me. “Rub back and forth. Be consistent. One-two-one-two.”

When I felt that she had it, I stepped back. She stopped. Her knees were bent slightly and her fingers had taken her cunt from the side of the crotch, not the waistband. She never ceased to surprise me.

“Is this your way of getting back at me?”

Her body must have been able to override her mind, because she moved her finger again, closing her eyes. Her cheeks reddened and her knees bent more deeply.

“In Florence. An hour after we got to the hotel. I came so deep in you that night. I fucked you from behind with your leg up on the dresser. I wanted to thrust my whole body inside you. I loved you that much. And I gave up who I was. Last night, at the club, I remembered what I was. I was a man who was obeyed. I dominated women, and they submitted to me. The result was what you’re about to feel. Complete pleasure.”

She let out a long, low groan, leaning on the vanity, twisting. I could have fucked her right then. I could have bent her over the counter and pounded her. But that wasn’t the point. No. Watching her hand move under her clothes because I commanded it. That was the point.

An uh escaped her throat. Years of marriage had taught me that meant she was about to come.

“Thank you,” I said. “We’re done. I’ll send you the title to the car. You might want to pull your skirt down, since I can’t lock the door from the outside.”

It was hard to walk away from her panting, bent frame without tasting her cunt or even seeing more of her reaction, but I turned the corner, unlocked the door, and left the bathroom.

CD Reiss is a USA Today and Amazon bestseller. She still has to chop wood and carry water, which was buried in the fine print. Her lawyer is working it out with God but in the meantime, if you call and she doesn’t pick up, she’s at the well, hauling buckets.

Born in New York City, she moved to Hollywood, California to get her master’s degree in screenwriting from USC. In case you want to know, that went nowhere, but it did give her a big enough ego to write novels.

Critics have dubbed the books “poetic,” “literary,” and “hauntingly atmospheric,” which is flattering enough for her to put it in a bio, but embarrassing enough for her not to tell her husband, or he might think she’s some sort of braggart who’s too good to chop a cord of wood.

If you meet her in person, you should call her Christine.

“How can someone so achingly beautiful hold a soul so dark.” ©️ Manik, Amo Jones One-click: Amazon:… https://t.co/oZbwCx1tGc

h J R
▫️▫️NEW RELEASE▫️▫️ One Momenr Please was just the book I needed at this moment. Fun and sexy, wholly entertaining… https://t.co/qDHNVIpVfv

h J R
#CoverReveal “The Prince and the Pawn” by B.B. Reid https://t.co/hdH64Wx0ev on @bloglovin

h J R
RT @bibliophilechlo: OMG! Corinne Michaels shared her first teaser for Fight for Me and I am so excited! Declan and Sydney are sure to be o…