There is a fine line between love and hate, and this line is never as blurry as it is when Vicious and Emilia are together. Their passion, their contempt, their love, and their hurt all play an intricate role in the complex and often destructive relationship that will enthrall readers from page one.

The hero, Vicious, is an a**hole from the very beginning. Rich, good-looking, popular, and has girls for days, Vic wants for nothing. Everything is at his feet, and he treats everyone, except his three closest friends, as disposable. While this behavior should be appalling, as the story progresses, readers can see that this is a learned behavior. His callousness towards others is a direct result of his interactions with his father, step-mother, and the step-mother’s brother. And just like any other bully, Vicious is hiding self-loathing and pain beneath his anger and contempt for Emilia. He targets her because she is the good he doesn’t think he deserves but he desperately wants, and while this doesn’t forgive any of the atrocities he commits in his youth or as an adult, it does explain his motivation for his behavior and makes him a more sympathetic character. What I ultimately love about his character is that even as he evolves in the novel he still keeps the core attributes that make him Vicious: the sexy confidence, the dominance in all aspects of his life, the incredible sex appeal, the protectiveness over the people he loves. Thus creating a hero I should hate, but can’t help but love.

Emilia, our heroine, is a good person down to her core. She cares for her family deeply and is willing to sacrifice for them in many ways. While she wants to be liked, especially as a teenager in the story, she is still unwilling to compromise who she is and what she enjoys, which only showcases her fortitude. What I love most about her, though, develops through her interactions with Vicious. Her constant challenge of Vicious, his behavior and his comments, proves she has gumption. Even though there are times she loses or retreats, she never withholds her contempt or anger from him, and, as an adult, she stands toe-to-toe with him, making him finally question some of his own hard rules he lives by. Some readers will be angry with Emilia for her feelings towards Vicious. They won’t understand why she even has feelings for him when he is nothing but vile towards her, but as the story progresses, the reader sees their relationship isn’t so clear cut. Even when he was mean to her when they were younger, he still laid claim to her, and there is just something about a man wanting you so much that he claims you even when he doesn’t want to do it. The reader also becomes privy to many instances where he pulled down his walls and let her inside, even if it is only briefly. These little moments with the real Vic is enough to keep drawing her back to him. As an adult, these moments only increase in frequency and in their depth, creating a deeper connection between the two. Even as their relationship changes and evolves, though, Emilia never loses that one aspect of her character that readers will admire most, her backbone and ability to put Vicious in his place.

The other HotHoles in the story, Trent, Jamie, and Dean are very similar to Vicious in their lifestyle, treatment of women, and confidence, but the story behind each character is insanely different. Throughout the story, the development of Trent’s story and Jamie’s established story line piques my interest, as it doesn’t seem that they will follow any traditional romantic trope, and I can’t wait to see where she takes them. Then, there is Dean with some interesting plot developments near the end of Vicious that certainly has me excited to spend some more time with these 4 men.

This story is told in dual point-of-view, which is crucial for the reader not only to understand the complex character of Vicious, but also to allow the reader to understand how two people can love and hate at the same time. The POV allows the reader to comprehend the motivations behind Vicious’s behavior in youth and as an adult, and it serves to show the development of their relationship throughout the novel. Readers get to see the change from purely physical lust to actual love, and it is conveyed with more than words but actions. On top of the relationship, readers will be captivated by the secondary plot line concerning the adults in Vicious’s life. The revenge and the hate that drives him also drives the story, and just like Vicious, readers will seek vengeance with him.

Vicious is my second book by L.J. Shen, and she is quickly becoming one of my favorite, go-to dark romances. Why? Her heroes are more than just a**holes to be a**holes; they are more complex and motivated by something much deeper. I also love L.J. Shen’s heroines because they have the mettle to fight for what they believe, what they want, and what they deserve. Finally, her writing and story lines are entertaining and sometimes disturbing, but that is what I love about her writing. It is seductive, it is engaging, it walks the fine line between love and hate, and I freaking love reading every twisted romance she composes! 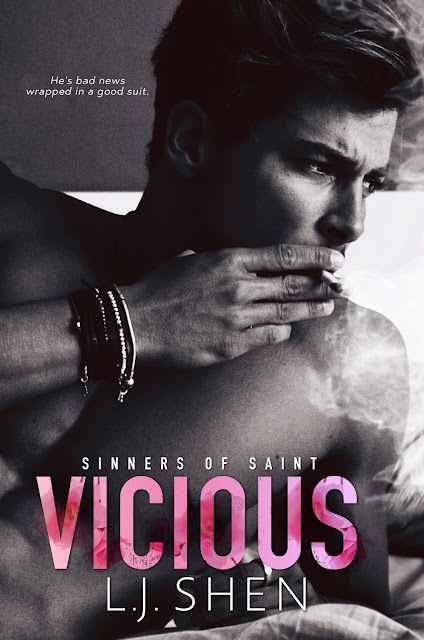 Emilia
They say love and hate are the same feelings experienced under different circumstances, and it’s true.
The man who comes to me in my dreams also haunts me in my nightmares.
He is a brilliant lawyer.
A skilled criminal.
A beautiful liar.
A bully and a savior, a monster and a lover.
Ten years ago, he made me run away from the small town where we lived. Now, he came for me in New York, and he isn’t leaving until he takes me with him.
Vicious
She is a starving artist.
Pretty and evasive like cherry blossom.
Ten years ago, she barged into my life unannounced and turned everything upside down.
She paid the price.
Emilia LeBlanc is completely off-limits, my best friend’s ex-girlfriend. The woman who knows my darkest secret, and the daughter of the cheap Help we hired to take care of our estate.
That should deter me from chasing her, but it doesn’t.
So she hates me. Big fucking deal.

She better get used to me.

“If you’re looking for a book that’s a little bit dark, a little bit twisted, with a character driven story that leaves you panting more than once, Vicious is it.” – 5 Obsessed Stars – Reader Review

“Christ. Just Christ. The naughty bits are hot and steamy, the love story is unique for sure, and the writing is fucking epic because LJ Shen.” – Mells View 5 Stars

“You’re pissing me off,” she said quietly, her eyes still searching my face.

“And that’s turning me on,” I retorted, my voice flat. “So you might wanna tone down the hate glares if you don’t wanna find yourself being fucked on this desk with the blinds still open.”
I was still staring at my screen, working on the merger deal I was eager to get signed before Christmas, but I could see from my peripheral that she had paled. I liked how—once again—I’d gotten under her skin. Quickly.
“You’re disgusting,” she muttered, still staring at me—but not in a way that suggested she was appalled.

I cracked my neck, opening my browser and checking the stocks on the screen, skimming through the greens and the reds. “That may well be, but I’m balls deep in your fucking head, Help, and there’s nothing you can do about it.”
Her eyes glittered with rage, and fuck, I was so hard, and fuck, she was so beautiful. This was so on. I was going to fuck Dean’s ex-girlfriend, use her for my personal needs, and toss her away when I was done.
And after choosing the wrong guy, there was no doubt in my mind, she deserved it too.

“You just gave Floyd a lecture about the inter-office fraternization policy. No mixing business and pleasure.” She leaned forward. Her elbow touched my finger accidentally, and she jerked it away.

I met her halfway, erasing the space between us across the desk. “Correction—guys like Floyd won’t give you pleasure. Men like me would. Besides, the man likes Arrow,” I drawled, as if this alone was a reason to fire him.
To me, it was.

“You know what your problem is, Vicious? You still haven’t decided if you hate me or like me. That’s why you act like this every time I’m around other men.” There wasn’t a trace of embarrassment in her voice. She owned up to this.

What she didn’t know was that I knew exactly how I felt about her.

I hated her, but was attracted to her. It was really that simple.

“You know what I feel right now, Ms. LeBlanc? I feel like you need to pack a fucking bag and start making the necessary arrangements. You’re coming with me to California, whether you like it or not.” 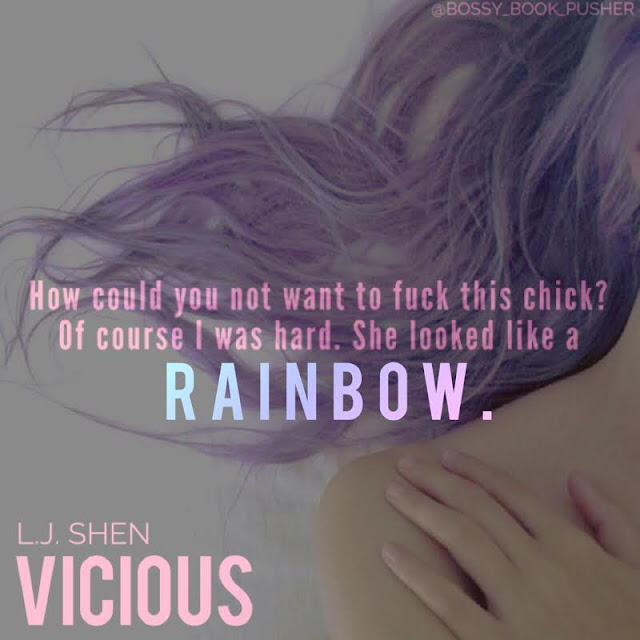 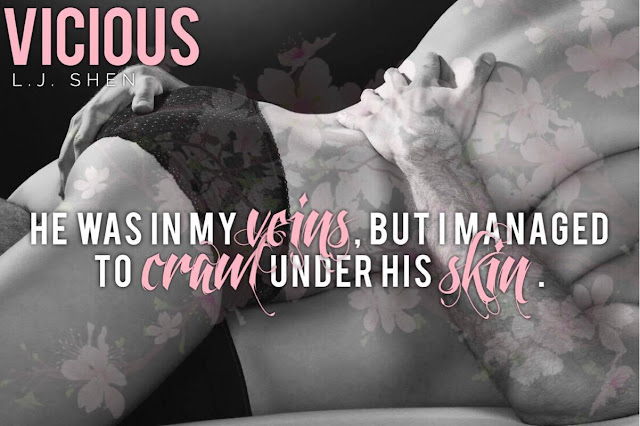 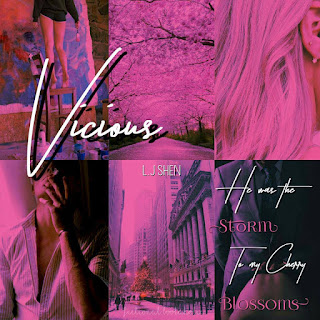 Head over to LJ’s Facebook Page for multiple giveaway 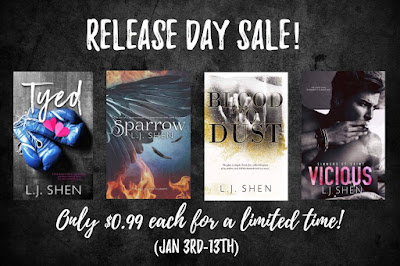 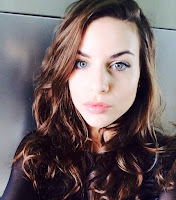 L.J. Shen resides in sunny California with her husband, son, chubby cat and wild, wild dreams.
Her passion is to write badass stories, sushi, UFC and her awesome family and friends (not in this order, though. Obviously, sushi comes before writing. Oh, and also the family part.)
She spend the first half of her twenties traveling the world and is now paying all the fun with extra shifts in front of her MacBook. Feel free to contact her on her Facebook page. She loves to hear from her readers.