5 One and Only CROWNS

Is it possible to fall even more in love with Dylan and Ace? Yes! WedLocked only solidifies how truly amazing this couple is. Readers will truly fall for this couple, their relationship and the resolution to this journey they have been on. It is true and complete romance perfection, encapsulating what is pure and good about love.

Could Dylan and Ace be any more perfect? No, absolutely and emphatically no. Dylan is still the optimistic, wears his heart on his sleeve, fully devoted man readers have adored the whole way through the series, and Ace is still the protective, sometimes gruff, unabashedly in love man readers love. These two together are pure perfection. The love they feel for each other radiates our from them and suffuses the room with love. It is true and pure and good, the epitome of everything love should be!

This story is truly Dylan and Ace’s happily ever after. There is really little to no conflict, and normally that is a deal breaker for me as a reader, but in this case, having walked this journey with these two, I wanted nothing but happiness and love for these two. They certainly deserve it! All of it! All the happiness! And, Ella frank and Brooke Blaine deliver in every single regard.  Readers get to see the planning, the bachelor party, the gorgeous wedding, and, oh God, that epilogue had me tearing up a bit.

WedLocked by Ella Frank and Brooke Blaine is everything, absolutely everything, readers of the PresLocke series could have ever hoped for in their conclusion. It is fun and romantic and steamy (I mean it’s Dylan and Ace, so of course it is HOT), but as always there is this underlying message of acceptance, of being free to choose who you love, and, most importantly, that love is love. No matter your gender, sexual orientation, race, etc. your feelings and choices are your own, and for this reason and so many more this series will go down as one of my favorites.

Because you have believed in them,

Loved and encouraged them,

Ella Frank and Brooke Blaine invite you to join

Saturday the Twenty-Fourth of May

At Six-O’Clock in the Evening

For Love, Laughter and Happily Ever After

Get your copy of Wedlocked today!

“SO YOU’RE GONNA want to keep your toes on the tail of the board and grip the rails under your chest like this,” Dylan said as he lay across the surfboard to show me the basics of his favorite pastime on the secluded stretch of beach. Not that I was paying much attention to the words coming out of his mouth. I was much more interested in the way his muscles flexed beneath the skintight Body Glove wetsuit he wore.

As he pushed himself up into a standing position, my gaze traveled down the broad expanse of his back and down to his ass.

“See how my dominant leg is in the back, and— Ace? Are you paying attention?”

“Mhmm,” I murmured as I bit down on my lower lip and continued my perusal.

Dylan turned to face me, and his hands went to his hips. “Oh yeah?” he said when I looked up. “What did I just say?”

Taking a step forward, I gave him a cocky grin and tugged him off the surfboard and onto the sand until he was flush against me. Then I let my hands roam down over the firm, round muscles of his ass. “Something about being a dominant in the back,” I said, nipping at his lobe. “So why don’t you turn around?”

A groan of frustration left Dylan then, but his head tilted to the side to let my lips trail down his neck. “You’re not gonna feel so cocky when you can’t get up on that board.”

His hands covered my chest and he gently pushed me away. “How about you prove it, hotshot?” Then he pointed to the longboard I’d rented for the weekend. “Why don’t you show me how it’s done.”

“Ace. Get your ass on that board.”

I squinted in the sun and grinned. “You gonna be this bossy all weekend?”

I took a step back so I was by my board, and crossed my arms. I had my wetsuit on, but it was still undone and hanging around my hips while Dylan walked me through this process step by step, and my move had the desired effect. He rubbed a hand up the back of his neck and over his hair, leaving it tousled and oh so sexy.

“Don’t try and act innocent with me, Locke. I’m trying to teach you a new skill. One that will keep you from hurting yourself. And you’re standing there being all…” He waved his hand up and down, gesturing to my exposed upper body.

“See. Stop it,” he said, and then pointed to the board. “And zip up that damn wetsuit so I can’t see all your muscles.”

I arched a brow as I moved to slip my arms through the stretchy synthetic material, and when I reached for the zipper and pulled it up to the base of my skull, Dylan groaned.

“I’m sorry. You’re not checking me out, are you? Because you’re supposed to be paying close attention to teaching me something that could save my life,” I said as I turned around and made a show of bending down to get on the board.

“Yeah, well, let’s hope that holds true when the wave dumps you on your ass.”

I let out a sigh and gripped the board just as he’d told me, because the truth of the matter was, I had never surfed a day in my life. I grew up in Chicago, for God’s sake. But Dylan, with his sun-kissed hair, long, lean body, and eyes the color of the sea, looked right at home with the sun shining down on him as his feet sank into the sand by my head.

“Let’s try this a couple more times here on land, and then we’ll get you out in the water. We won’t have you trying to stand up just yet. But if you can get the hang of at least catching the wave into the shore, we might be able to progress.” He crouched down and said, “Remember, toes on the tail of the board and grip the rails, and then push up.”

As I did as he instructed, I paused in the push-up position and was rewarded when he leaned in and took my lips in a sweet kiss.

“Again,” he whispered, and I moved back down to repeat the move, and this time when I paused, I was rewarded with a deeper kiss. When he pulled away too soon, I grumbled and he laughed, straightening. “Any more of that and we won’t make it into the water. On your feet, Locke, it’s time to hit the waves.” 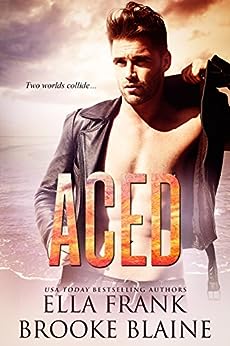 Ace Locke is Hollywood’s hottest action hero. Women across the globe fling their panties in his direction, but Ace isn’t interested in those—he’s more of a boxer briefs kind of guy. Specifically, those of the nearly naked male model on a billboard he drives past every day.

Though he recently made headlines for his public coming out, Ace is wary about pursuing a relationship, fearing what the court of public opinion will do to his career. But there’s something in the model’s expression that intrigues him and has him wondering what if?

Dylan Prescott just scored his biggest modeling campaign yet. One that has him plastered all over L.A. in not much more than what he was born with. And when he’s cast in Ace’s latest blockbuster, it puts him in close proximity to his ultimate fantasy.

Outwardly confident, Dylan has no problem with his sexuality or his pretty-boy looks, and uses both to his advantage to get what he wants. And what he wants is the impossible—Ace Locke.

What happens when these two worlds collide?

Add to your TBR on Goodreads

“ACE LOCKE JETS OFF TO SIN CITY WITH MYSTERY MAN”

The man on Locke’s arm has been identified as Dylan Prescott, the sexy new “it” model currently featured in the latest Calvin Klein ads. Sources tell TNZ the men met on the set of Locke’s upcoming action film Insurrection 2, and that “they only have eyes for each other.”

This is the first public gay relationship for Locke, who came out a year ago, and there has been much speculation on who would finally be the one to catch his eye.

According to multiple eyewitnesses, Locke whisked Prescott away on his private jet for a romantic weekend at Syn, the most exclusive hotel on the Las Vegas Strip. After pictures recently surfaced of the new couple, affectionately named PresLocke, it appears from the possessive way Locke keeps his new beau close that things are heating up.

The world is watching #PresLocke, and we’ll be sure to keep you up to date on this budding relationship!

Ace and Dylan’s story continues in Book Two of the Bestselling PresLocke Series.

Ella Frank is the USA Today Bestselling author of the Temptation series, including Try, Take, and Trust. Her Exquisite series has been praised as “scorching hot!” and “enticingly sexy!”

You could say Brooke Blaine was a book-a-holic from the time she knew how to read; she used to tell her mother that curling up with one at 4 a.m. before elementary school was her ‘quiet time.’ Not much has changed except for the espresso I.V. pump she now carries around and the size of her onesie pajamas.

If you’d like to get in touch with her, she’s easy to find – just keep an ear out for the Rick Astley ringtone that’s dominated her cell phone for ten years.