With the many different elements of sexual chemistry, romance, and suspense, Bodyguard by CD Reiss had me not only enamored with Carter and Emily but flipping the pages in anticipation of how their story would end.

Boy, oh, boy. I’m not sure I have loved a CD Reiss hero this much since Dash Wallace. Carter Kincaid is EVERYTHING!! The protective nature of being a bodyguard makes him uber-sexy, like he emits strip down in front of him, I need you now kind of pheromones. I found this aspect of his personality completely irresistible, especially when readers realize how far his protectiveness extends. The secret he is keeping will only serve to make readers love him more. Unlike other male characters in the story, Carter seems to balance that line between being assertive with a woman and respecting her space and wishes. His character is one of the many reasons I love this book.

Emily’s character is stuck in a life of isolation and fear after escaping a rather abusive relationship, which she is still dealing with. While she doesn’t seem to really be really living, readers cannot really blame her. What will make readers love her character is how she evolves and truly starts to take control of her life. More than anything, though, readers will respect her for her choices and her ability to take be her own life and save herself.

This story from the very beginning has intense sexual chemistry between the two characters. It is very much insta-lust that develops into insta-love. Even though the pacing of the relationship to be fast, the circumstances in which they meet lends itself to the believability of it all. What enticed me additionally is the stalker story-line, as it is clear that this will be a contributing factory in the development of the story and their relationship. What I would have loved is to see a bigger explosion when the inevitable occurs. If this would have happened, Bodyguard would have been a 5 CROWN read, without a doubt.

Love the Bodyguard, love CD Reiss’s story-telling, and love the journey of these two characters as they find their HEA! Bodyguard is definitely another one-click must read from this author. 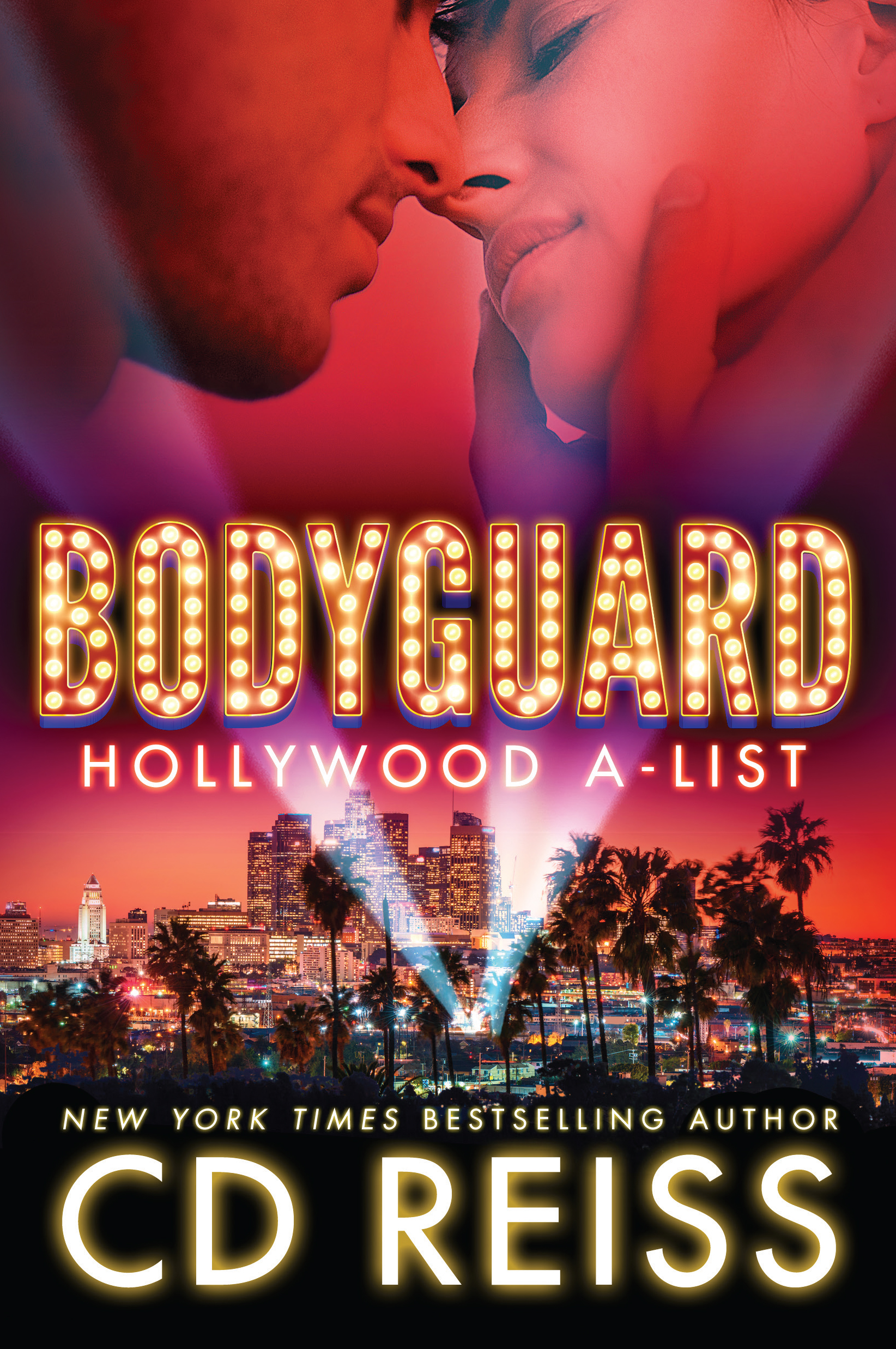 Get your copy of Bodyguard today!

“Are we going to have another ‘about last night’ conversation?” I asked.

What did I want to say? Everything. but mostly, I wanted to tell him how much I liked kissing him and how conflicted I was. I wanted to demand answers immediately and give him space at the same time.

All the words tried to jump forward, but when he stopped at a light, our eyes met in the rearview. The words landed in a tangle, unsaid.

He tapped the steering wheel when he turned it, using both hands for the first time since I’d gotten in.

“Yeah?” He briefly looked at me in the mirror.

“What happened to your hand?”

“Burn.” he brushed his left hand over the bandage at the top of his palm, right where you’d burn it if you were picking up a hot pot handle. He caught my eye in the rearview again.

I didn’t know if I believed him.

“What were you cooking?”

“And you still went to get a Danish?”

He rubbed his upper lip with his left hand and tapped the wheel with the bandaged one.

“I don’t know anything about you. You could live in your mother’s basement.”

“That’s just where I bury the bodies.”

Blatant avoidance. It had been cute before; now it was getting on my nerves.

He could have been lying, buy lying liars always lied. There wasn’t a thing I could do about that except make sure I asked.

Something was wrong. We’d kissed twice, and twice he’d shut down. I should have been the one shutting down. I was the one with all the ex-boyfriend baggage. Why was I the one who was always so willing?

But there he was in the front seat, driving with both hands on the wheel, glancing at me once in a while to make sure I wasn’t choking on my tongue in the back seat. Discomfort radiated out of him.

Here I was with my hands in my lap thinking about ways to kiss him again.

He pulled into the little lot and wedged into a space. He turned off the car, popped his seat belt, and stared at the wheel for a split second too long. I was about to open the car door myself when he turned all the way around, arm over the back of his seat, bandaged hand on the back of the passenger side.

“Kissing you…” He stopped and looked at my lips so intensely I folded them back and bit them. “You’re dangerous. I can’t even see your lips, but I can taste them. I couldn’t brush the taste of you out of my mouth this morning. Right now. The honey. I can taste it but not enough. I want to kiss you again, and I can’t. I lose my shit around you. I can’t do it. My job is control. Do you understand what I’m saying?”

My jaw loosened, and I let my lips go.

“No, I don’t. I’ve met bodyguards before. You’re a stoic bunch, but you’re not all celibate. And if you think this is easy for me, you’re wrong. I’m afraid too. I’m afraid you’re going to get hurt because of me. last night…” I put my fingertips to my lips as if that would keep the choking sob from coming. I kept it back. “Last night he showed me he’s back, and if he’ll hurt me, he’ll hurt you.”

If I thought seats would be a barrier between us, I was wrong. He launched himself between them and placed his lips on mine. Our third kiss was unexpected, uncomfortable with him stretched between front and back. I wove my fingers in his hair, giving him my mouth, and taking his.

I wanted that kiss to tell him it was all right. He could lose control. He could bemore than a protector. He was as safe with me as I was with him. But I couldn’t without lying to both of us.

He yanked his lips away.

“Trust me.” He leaned his forehead against mine.

Hollywood bad boy Brad Sinclair always gets his way, whether it’s the role he wants or the bikini-clad model he has to have. But when a bombshell gets dropped in his lap in the form of a dimpled five-year-old from a forgotten relationship, he knows his life is about to change forever.

Cara DuMont isn’t exactly thrilled when she gets assigned to be the nanny for the latest box-office king. She has one rule: no celebrity fathers, especially single ones with devilish good looks and rock-hard abs.

But as soon as Cara meets Brad and his adorable little girl, she knows she’s in for a world of trouble. Because there’s something about the way Brad looks at her that makes her believe that some rules are meant to be broken…

Get your copy of Bombshell today!

CD Reiss is a New York Times bestseller. She still has to chop wood and carry water, which was buried in the fine print. Her lawyer is working it out with God but in the meantime, if you call and she doesn’t pick up she’s at the well hauling buckets.

Born in New York City, she moved to Hollywood, California to get her master’s degree in screenwriting from USC. In case you want to know, that went nowhere but it did give her a big enough ego to write novels.

She’s frequently referred to as the Shakespeare of Smut which is flattering but hasn’t ever gotten her out of chopping that cord of wood.

If you meet her in person, you should call her Christine.

Need graphics for your upcoming romance novel? Teasers and Notes from the Modern Belle is booking for July and beyo… https://t.co/kVcygrdQqL

h J R
What are you excited to read this week? Tbh, my list is a mile long. While these are my top 3, I’m also excited t… https://t.co/JUY6RooCOS

h J R
#SoontoDrop Most Anticipated Reads of the Year https://t.co/IAMEb7fnmv on @bloglovin