Unwritten by Jen Frederick follow the band FMK as they tour and attempt make it big.  Following the tour is Landry, the new lead singer’s sister, who is escaping some dangerous circumstances from home.  From their first meeting Landry and Adam are attracted to each other, but their relationship does not take the route of a typical rock-star romance.  Adam, like most rockers, is insanely attractive, incredibly gifted, and great in the sack, but, unlike most rockers, he immediately recognizes that he wants more with Landry and is patient and understanding with wooing her.  The aspect of Landry that drew me to her is her intelligence. She is incredibly smart, but is struggling being extroverted with the past she has endured.  Readers will begin to love her as she develops a friendship with Rudd, and they will fall in love with her as she begins to fall in love Adam.  As with any good relationship, these two change each other, and they evolve for the better.

This novel is what I would consider a slow burn.  It takes a long time for these two to connect and get together.  Much of the time is used to develop their relationship emotionally, which is reasonable based on the past that Landry has endured.  Once they get together, though, Jen Frederick, although throwing some turmoil their way, leaves them in tact, which is a huge selling point for me as a reader.

Unwritten is fun rock-star romance with likable characters and engaging plot.  Readers will certainly enjoy watching Adam and Landry fall in love, the family dynamics of FMK, and their journey to stardom. 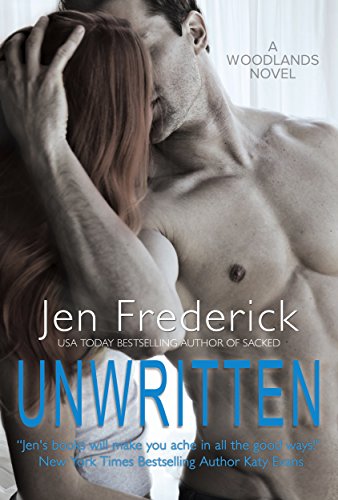 After years of trying to hit it big with his band, Adam Rees’ dream is finally about to come true. A new lead singer brings with him a hot tour invite, but with a catch—his sister has to come with them. Despite an off-limits edict, Adam is instantly attracted the smart and beautiful Landry. But if he wants to claim his woman, it might be at
the expense of all his ambitions.

Landry Olsen has had success at every stage of her life, except when it comes to men. She’s put her heart on the shelf, but one look at Adam and she’s a goner. The hot rocker heats her from the inside out, and she wants him as much as he wants her. The only thing standing in their way of their happiness is Landry’s brother—she ruined his musical hopes before, and she won’t do it again. Even if it means saying no to the one guy who makes her believe in love again.

There’s no fruit more tempting than the forbidden kind…

Get your copy of Unwritten today!