As an English teacher, I have a

n immense love of words and a deep appreciation for the craft of writing.  The main aspect that I love about the books in this particular series is the style of the author.  Her ability to take a fairytale and modernize in a unique and refreshing way is appealing.  This isn’t just the same story with new character names and setting.  She takes the main aspect of the fairytale, the theme or symbolic element from the tale and uses to create magic.  Her stories and characters are beautifully crafted, and I have such a deep appreciation for Lauren Stewart as a writer.

Now that I am done gushing about her, let’s talk about the story. In this case, the reader encounters two characters, Andi and Hayden, who are “asleep”.  They are moving through the motions, taking no real joy in anything that they do.  Both of these characters, while they have made mistakes, are trying to be good and honorable.  Andi spends her days trying to repent for a crime she helped to commit, unknowingly, and Hayden spends his days trying to fulfill obligations.  Her desire to right her wrongs, without any provocation from an outside source makes the reader love her, and Hayden’s commitment to the people he cares about, particularly Clare, makes him an admirable hero.  These characters are good people, even their self-imposed sleep is a result of noble attributes they both possess.    The reader has no choice but to root for them to be together.  The reader wants them to desperately “wake-up” and live a life they are both so deserving of living. I also love that they save each other.  Unlike in traditional fairytales, where the prince saves the princess, these two save each other.  I’ll leave the details out of it so you can enjoy the story, but I love to read about relationships where the saving is two-sided.

One aspect of the plot that I found to be the most interesting is the fact that characters don’t meet face-to-face for a good portion of the book.  They are confined to the world of technology.  It became the metaphorical wall for the which they are choosing to hide behind.  I think that this also lent itself to show how the characters truly came to know one another, so that when they do meet, it is about so much more than physical attraction.  The areas in which they withhold information from each other doesn’t hinder their ability to truly know each other, and this becomes an important aspect for the resolution of the story to make sense and be good for the reader.

So why the four star review since I just spent the entire review gushing about the characters? I like the story and the characters, but I loved Darker Water.  Also, the back and forth from Andi began to wear on me as the book went on; however, this did not detract from my love of the book.  I would wholeheartedly recommend this book to anyone!

This is another solid addition to the Once and Forever series!  We get another fabulously written rendition of Sleeping Beauty, we get to see old characters, and it is written so wonderfully that I was able to get lost in the world and characters she created.  I certainly can’t wait to see what she does next with her retelling of The Emperor’s New Clothes!

Sara has a kick-ass life—loyal friends, a house in San Francisco, and an amazing job as a virtual assistant. It’s perfect…except that Sara doesn’t actually exist. She’s just a borrowed name that Andi Clark hides behind. Using a fake identity lets Andi stay safely shielded behind the screen of her computer and concealed from the real world. With her history, pretending to be someone she’s not is the only way Andi can make up for the mistakes of her past. Not exactly ideal, but hey, no one’s life is perfect.
Actually…
Hayden Bennett’s life is pretty damn perfect. He’s married to a beautiful woman, lives in a luxury apartment, and is prepped to take over the multi-million dollar company his father built. Perfect…except that his wife is madly in love with someone else, his career is meaningless, and he’s forgotten how to live, let alone be happy. But when Hayden hires a new virtual assistant named Sara, her sharp wit and intelligence leaves him wanting something more. Something real. Something incredible.
Two people need to wake up to understand how perfect they are…for each other. If they can’t, any chance either of them have of finding a happily ever after will be virtually impossible.
~~~~~
This highly-anticipated sequel to DARKER WATER is a standalone contemporary romance inspired by Sleeping Beauty. VIRTUALLY IMPOSSIBLE is Hayden and Andi’sstory, and this is how their fairytale begins:

Once upon a time there was a woman who made the mistake of trusting the wrong man. And that mistake led to another. And another and another, each more damaging than the last. But the woman was as ignorant of her mistakes as she was of the damage they caused. Until she was punished for them.
Around the same time, but in a totally separate part of the city, lived a noble man and his beautiful wife. Though their castle was the envy of all, its empty halls echoed of loneliness and regret. For the man had lived his entire life asleep, and both of them remained silent of who they truly were and what they truly wanted. And then one day, the woman entered the man’s life and forced him to awaken…

~Andi~
Today’s torture was ‘spinning’. Seriously, who comes up with this shit? Twenty-five sweaty women pay good money to ride fake bikes while horrible music blares and a man in tight spandex shorts yells at us for being lazy. And we do this by choice? Even worse, we actually had to sign up in advance for this crap, just to get a spot.
“Do you want to press charges?” Emilia asked about a mile in. At least, I’m assuming we’ve gone a mile. I wouldn’t be sweating this much otherwise, right?
“What are you talking about?” I yelled back. Thankfully—and I use the word in the most ironic way—we’d gotten to the class early enough to snag two bikes next to each other. But even so, screaming was necessary.
“Hayden Bennett.”
“Hayden?” My guess is that she waited until now so that I’d have no more oxygen flow to my brain and wouldn’t be able to understand what she was talking about. Well, boy was she wrong—I wouldn’t have known what she was talking about five minutes ago. Did that mean we could stop now?
“I’m not sure how we’ll do it without your name coming up, Andi. But if you want to press changes, I’ll support you.”
“You have no idea how confused I am right now.” And I couldn’t blame a runner’s high because we’re biking to nowhere. Plus, I don’t actually know what a runner’s high feels like. It’s supposed to make this easier, isn’t it? And not so excruciating? “Why would I press charges against anyone, let alone Hayden?”
“Sexual harassment doesn’t have to be physical, Andi. It can be verbal too.”
I stopped spinning and waited for her to follow. Because obviously, I wasn’t the one with impeded oxygen flow. “He didn’t sexually harass me physically or verbally, Emilia. Why would you think that?”
The instructor yelled at me, his voice the only sound more piercing than the music. “Don’t stop now! We got a long way to go!”
He was kidding, right? We weren’t going anywhere. But, evident by the amount of glares I saw in the room, everyone else seemed to think I was holding back our journey or something, so I started pedaling again.
Emilia wiped her hair from her face. “First, you tell me to reassign him because you thought you might have crossed a line—which I totally didn’t believe, by the way and why I tried so hard and so successfully to talk you out of it.” She puffed out a few breaths as if she were in labor. No irony there. “But if my advice pushed you into something harassment-ish, I’ll never forgive myself.”
“There’s only one thing you should never forgive yourself for, and that’s making me do this class. But you didn’t miss anything where Hayden is concerned. Or was concerned. Promise.” I crossed my heart, holding it an extra moment to make sure it wouldn’t explode. I swear someone told me exercise was supposed to be healthy. Liars.
“I figured, but I had to ask.” Her non-pause made me wonder about the honesty of our relationship. But before I could call her on it, she started talking again. Well, huffing and puffing and talking again. “Especially after he called and practically begged me to convince you to work for him again. For more money, too.”
“He begged you? Are you sure you’re not getting him mixed up with one of the other men who can’t live without me?” At least that’s what I tried to say—my wheezing probably made some of the words incomprehensible. “I don’t think Hayden has needed to beg for anything in his entire life.” 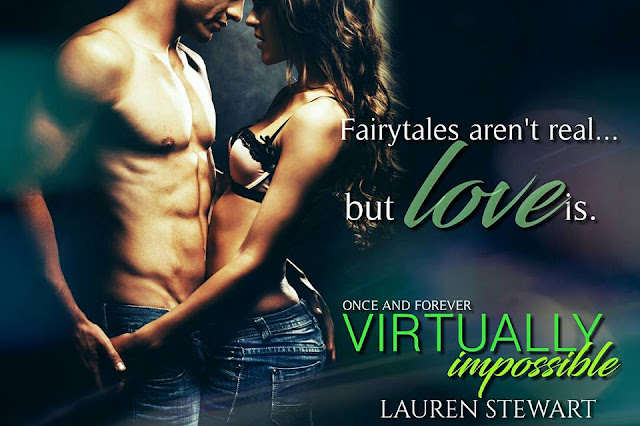 Lauren Stewart grew up reading Stephen King, Ray Bradbury, James Clavell, Piers Anthony, and Agatha Christie, which explains why she can’t seem to stick to one genre at a time. She loves emoticons and hates when people speak in the third person, so…
I got to the more romantic stuff pretty late, but romance was what changed me from an obsessed reader into an obsessed reader AND writer. I think my writing style comes from a mash-up of my early favorites and my new ones, women like JR Ward, Karen Marie Moning, Nalini Singh, Charlaine Harris, and Janet Evanovich. Wow, how much would you pay to be invited to that dinner party?
I want to make people think, cry, and giggle, not necessarily all at the same time (although it’s great when it happens). In every one of my books, you’ll find elements of other genres – fantasy, mystery, romance, paranormal, suspense, YA, women’s literature, all with a touch of humor and a lot of sarcasm.
Because what doesn’t kill us should make us laugh. 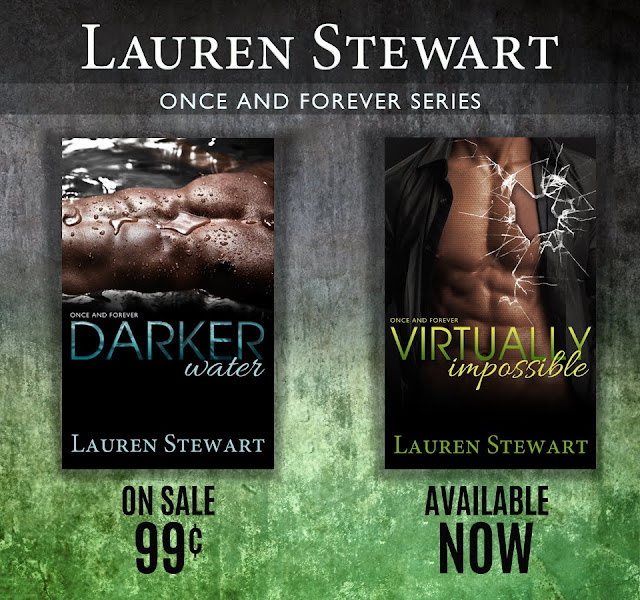