Once again, Sarina Bowen delivers another hockey romance that had me smiling and swooning, just generally falling in love with the men of the Brooklyn Bruisers.

Mike and Lauren are a unique couple in the way the fell apart and came back together.  In both cases it is quick, and although, for some readers, this may be a draw back to the story, it fits these characters and how Sarina Bowen develops them throughout the novel.  Mike, due to extenuating circumstances had to make tough choices in his past, but now that he is free to get back the love of his life, he does so with abandon.  His dedication and focus on the ice transfers to his goal of getting Lauren back, and Mike is such an honorable man, good teammate, and great dad, that readers root for him to win Lauren back.  They want his sacrifice earlier in the story to be rewarded, and Sarina Bowen doesn’t disappoint.

Readers have encountered Lauren in the previous two books, and she has been characterized as being standoffish and brusque, yet with Pipe Dreams, Sarina Bowen is able to make her character sympathetic.  Readers get to finally see what is behind the tough facade she is hiding behind, and their hearts will break for her.  Just as readers want Mike to be rewarded for his past actions, they want Lauren to get her happily-ever-after because her heart was broken through no fault of her own, and so readers will root for her as well.

Their relationship in the novel progresses rather quickly.  And while some readers might not be okay with the choices they make, I was. First, these two have a history.  Sarina Bowen does an amazing job establishing them as a couple in the past, so that readers feel their heartache in their past and their pain in the present.  Just as they didn’t want to wait to be together, I didn’t want to wait for them either.  Second, these two seem to just fit together, and not in destined for each other.  Mike and Lauren complement each other, and they are better together. Not only does their emotional chemistry thrive and make the fast progression of their relationship authentic and believable, but their physical chemistry is just as potent.  There is no doubt from their first interactions how much these two care for and love each other.  Third, the circumstances that ended them and put them back together are emotional and life-altering, and the live in the moment attitude Mike adopts makes his actions and Lauren’s seem appropriate.

I often find with sports romances that there is an unequal balance between the sports part and the romance part, but Sarina Bowen always does an amazing job balancing the personal aspect of her characters with the sports story line of the story.  Readers will be just as intrigued by the season of the Brooklyn Bruisers as they are by the romance of Lauren and Mike.  In addition to the sports plot, there is a family aspect to the novel with Mike’s teenage daughter, as well as the affects of death and how they alter our perception of who and what matters.  With all of these dueling storylines, Sarina Bowen seamlessly intertwines them to create one concise plot that will entertain readers.

When this book ended, I had that moment of pure happiness after reading a great book that was immediately met with a tinge of saddness for the end of another hockey series from Ms. Bowen.  I have loved this world she has created and the characters in it. I want more, more stories, more characters, more everything.  Like her Ivy Years series, this will be another one that I return to repeatedly, and it will go down as one of my favorites of all time!

I’m still going to hold out for more. Maybe a novella. Maybe you will be inspired to write another book about another member of the team.  It might never happen, but the hope for more will make the break a little less sad. 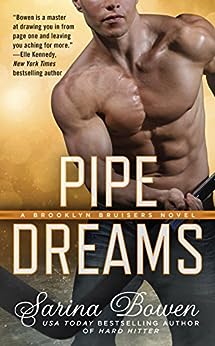 A goalie has to trust his instincts, even when taking a shot to the heart…

Mike Beacon is a champion at defending the net, but off the ice, he’s not so lucky. A widower and a single father, he’s never forgotten Lauren Williams, the ex who gave him the best year of his life. When Lauren reappears in the Bruisers office during the playoffs, Beacon sees his chance to make things right.

Lauren hates that she’s forced to travel with the team she used to work for and the man who broke her heart. There’s still undeniable sexual tension running between her and Mike, but she won’t go down that road again. She’s focused on her plans for the future—she doesn’t need a man to make her dreams of motherhood come true.

Lauren plays her best defensive game, but she’s no match for the dark-eyed goalie. When the field of play moves to Florida, things heat up on the beach.

One of Mike’s biggest fans doesn’t approve—his teenage daughter. But a true competitor knows not to waste the perfect shot at love.

Get your copy of Pipe Dreams today!

About the Sarina Bowen:

Sarina Bowen is a USA Today bestselling author of contemporary romance and New Adult fiction from the wilds of Vermont.

Her Ivy Years and Brooklyn Bruisers books are hockey romance novels. These two connected series began breaking hearts in 2014 with The Year We Fell Down. See http://www.sarinabowen.com for updates.

HIM and US are the bestselling, hockey LGBT novels co-written with Elle Kennedy. HIM is also a finalist for the Romance Writers of America’s RITA® Award.

Sarina enjoys skiing, coffee products and a nice glass of wine. She lives with her family, six chickens and more ski gear and hockey equipment than seems necessary.

She would be honored to connect with you at http://www.sarinabowen.com.