The Someday Girl (The Girl Duet #2)

“Is it possible to discover yourself in words penned by a stranger? Can you find your soulmate in the pages of a book?

This book!!!! This book killed me! Ripped my soul to pieces, and yet, strangely, gave me hope.  Hope that we can survive, hope that we can reinvent ourselves, hope that we can learn to love ourselves and let others love us in return.  At the end I was emotionally catatonic, feeling nothing, because it was just that good!

Kat hands down is one of my favorite heroines of all time, like ever in the history of all female heroines, this woman just spoke to me.  Her downfall, her rise from the ashes, and her quest to love herself in order to better love others and her life enthralled me. My heart broke for her, I cheered for her, and I became elated for her final HEA. Kat’s road to healing and self-discovery, however, makes this story so much more than a romance between a guy and woman.  It has such a huge focus on self-love, making yourself whole so that you can be better for yourself and the person you are meant to be with that becomes a tale of self-reflection, causing readers to evaluate their own understanding of love and relationships, often hitting them right in the heart.  Every single step of her journey is emotional, and when she finally comes full circle it is so amazing.  My heart soared for her.  Julie Johnson put me in her shoes, feeling every single emotion, and although it hurt so much at times, it is one of the most memorable and life-altering journeys I have ever been on as a reader.

Because there will be no spoilers here, I am going to address both guys.  Wyatt is light and sunshine, always having a positive look on the world.  He is honest, kind, and so incredibly loyal.  When he hurts, it is torturous. My heart breaks for him, but he is such a force of good in the story, bringing so much peace and contentment to the chaotic world of Hollywood that he can’t be held down.  The one thing that shocked me a little about his character is how harsh he could be at times.  It is clear that this is a defense mechanism, but I think it really showcases how circumstances and our choices can alter how we choose to behave. Grayson, GAH!!! I have so much love for this character.  I wanted so much from him this book, and while the character development I so desperately longed for didn’t completely happen, the road Julie Johnson took him on made me so okay with his storyline.  He is lost, he feels unworthy, and he feels unsettled. Just like Wyatt, my heart aches so much for him, so much so that when he acts in some atrocious ways, I can’t help but see the underlying motivation, which just creates tiny little fissures in my heart.  Both of these men, equally, have an everlasting place in my heart, and while I it is very clear who Kat should be with as the book progresses, and I love them so much I longed for each one to get their HEA.

#TeamGrayson or #TeamWyatt? All I will say is that Julie Johnson gets it right.  The man Kat ends up with is who she belongs with, and not because it is fated or some sign showed her the way, but because she makes a choice to be with him.  She reevaluated her life, made appropriate changes, and healed herself before she even considered attempting a relationship again, but when she makes the decision there is no faltering on her part.  She goes after what she wants with gusto, and I love that she became the aggressor.  She went after what she wanted with no qualms, and I love every single minute of the reconciliation that occurred between Kat and her man.

The plot of this story has so many levels.  There is the obvious romantic love triangle betwee

n Kat, Wyatt, and Grayson and the completion of the cliff hanger from The Monday Girl, but there is so much more to this story than these two plots.  What really stood out to me as I read this book is that there is so much about loving yourself, about being able to let yourself accept good in life, about taking care of you so you can be the best version of yourself for the person you choose to be with.  It is a story that is more than loving someone else, but also loving yourself.  All good relationships start with self-love, and what better message is there than this!

Side note: I am not done with this world. While Kat’s story is completely finished and wrapped up with The Someday Girl, there are so many unanswered questions and broken characters at the end that it can’t be over.  I just refuse to believe it!  I need more, more stories, more redemption, and more of Ms. Johnson’s beautiful words!

The Monday Girl and The Someday Girl are going down as one of my favorite books of not only 2017, but as one my favorite romances EVER! Each word is beautiful, each story line emotional, and each theme expressed in this story speaks to living a full life filled with love. This is going to sound dramatic, but my soul has been altered by Kat’s journey and the emotional and beautifully raw story. I may never recover, and I don’t think I want to.  And to answer the question posed at the beginning of the review, the answer is YES! That is what makes this book so much more than your average romance.  It is what sets it apart from the rest, and it is what makes it an ABSOLUTE MUST READ!  Julie Johnson has truly outdone herself, and I am in awe of this woman’s talent. 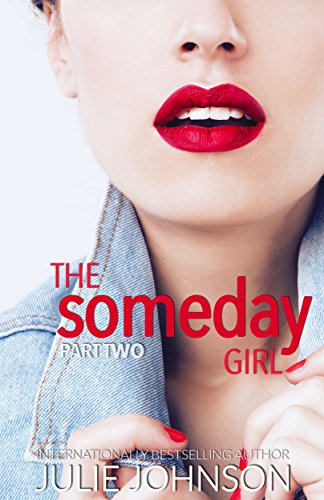 The movie has wrapped, but the drama is just getting started…

Katharine Firestone finally has everything she’s ever wanted — new house, new car, new status as a Hollywood A-lister. And yet, she’s never felt more isolated. As the movie premiere creeps closer, Kat spends her days playing an infatuated co-star for the press tour cameras, and her nights wondering what the hell she’s going to do to fix the mess she’s made out of her personal life.

Torn between the heartbreaker she tried to avoid and the man she never saw coming, Kat will be forced to answer the ultimate question: Do we get a say when it comes to choosing our soulmate?

Love. Lust. Passion. Paparazzi. The road to fame and fortune is never easy. And, in the City of Angels, the only place they guarantee a happily-ever-after is in the movies…

THE SOMEDAY GIRL is a tangled contemporary love story about a girl learning to love — her friends, her career, her soulmate, and, most of all, herself. It is the second installment of THE GIRL DUET, concluding the angsty, addictive storyline that began in THE MONDAY GIRL. Each installment is approximately 95,000 words. Recommended for readers ages 17+ due to strong language, sexual situations, drug use, and other mature elements.

Get your copy of The Someday Girl today!

Start this AMAZING duet today with The Monday Girl!

Katharine Firestone is a bit of a mess.

Between an acting career that’s never quite made lift-off to stardom, a pathetic love life of online-dating-app losers, and a maxed-out balance on every one of her credit cards, things can’t get much worse. So, when she’s plucked from relative obscurity to land a lead role in Hollywood’s next big blockbuster, Kat is sure she’s finally on the right track.

Until she meets her co-star, Grayson Dunn… and all her plans are completely derailed.

Grayson is everything you’d expect the hottest actor alive to be — charming, disarming, and cocky as hell. As their characters slowly spiral into love on screen, Kat struggles to keep herself from falling for real. She knows handing Grayson her heart and expecting him not to break it would be the biggest mistake of her life. Yet the deeper she’s immersed in his glamorous world, the more blurred the boundaries between scripted affection and sincere passion become… and the harder it is to deny that their on-camera chemistry has crescendoed into a behind-the-scenes love affair…

What happens when you fall for someone who’s guaranteed to shatter you into pieces? Do you walk away? Or do you let him break you because, even broken, there’s simply no way you can’t stay?

THE MONDAY GIRL is a messy contemporary romance about a mixed up girl who falls for the wrong boy. It is the first part of a duet. Recommended for readers ages 17+ due to strong language, sexual situations, drug use, and other mature elements.

My full 5 CROWN Review for The Monday Girl!

JULIE JOHNSON is a twenty-something Boston native suffering from an extreme case of Peter Pan Syndrome. When she’s not writing, Julie can most often be found adding stamps to her passport, drinking too much coffee, striving to conquer her Netflix queue, and Instagramming pictures of her dog. (Follow her: @authorjuliejohnson)

She published her debut novel LIKE GRAVITY in August 2013, just before her senior year of college, and she’s never looked back. Since, she has published five more novels, including the bestselling BOSTON LOVE STORY series. Her books have appeared on Kindle and iTunes Bestseller lists around the world, as well as in AdWeek, Publishers Weekly, and USA Today.