Unforgivable is not anything what I was expecting. I expected hot and filthy moments with high levels of angst. What I got, though, is a story that is relatively low on angst and a slow burn, one that focuses more on forgiving yourself for mistakes than anything else.

Wesley is the epitome of “bad boy” with a heart of gold. From the minute readers meet him, he pulls at your heart strings. Even as he ages, his self-worth never recalling grows. He never really sees himself as worthy of what he has been given. His character does go through considerable evolution, and he grows to eventually see that he is worthy of love and family.

Anna is a more difficult character because her mistake has to be big enough to make her life change drastically and justify the reactions of other characters but still be redeemable in the eyes of the reader, which is met. I found myself feeling bad for her. The choice she made alters her whole existence and changes her soul. Through the help of Wesley, though, she finds a new version of herself.

This is a slow burn, which is completely unexpected. A lot of the story focuses on their friendship and youth, and while engaging and pertinent to the story, I wish we would have gotten to the adult portion of the story sooner. There is also no real conflict outside of the internal conflict of each of the characters, and there doesn’t really need to be. The resolution is absolutely perfect for the journey these two have to take to be together.

Unforgivable is a very introspective novel, focusing on choices a person makes and how it alters his/her existence. While there aren’t many, the chemistry, especially as adults, the scenes are hot, and the bond between these two engaging. It is definitely a book that should be on your TBR.

There are certain things that are unforgivable…
Falling for your brother’s best friend is one of them.

That isn’t the worst thing I’ve done, though.
Not even close.

Shame and guilt follow me everywhere.
Except when I’m with him.

With him, I can breathe again.
Smile again. Love again.

But he has no idea what I’ve done…

Get your copy today $2.99 for a limited time 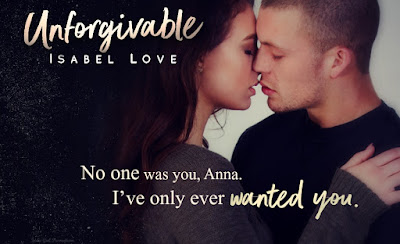 EXCERPT
“Would you
mind keeping this piece steady while I attach it?” he asks, interrupting my
reverie.
“No
problem.” I take my position opposite him, holding the piece of trim in place
against the dresser as he drills screws into the underside so that they remain
hidden from view. It’s like magic.
I study him
as he works.
He tilts
his head this way and that to make sure the piece is level before he starts.
Then, he lifts the drill, and taut muscles shine with sweat as he drives each
screw into the boards with purpose. His forearms flex and jump with every
movement. And his tattoo calls my eye to follow the bumps and dips of his
biceps and triceps.
Wesley
Scott is a perfectly sculpted specimen of man. He’s strong. Confident. Capable.

He catches
me staring and winks, rewarding me with his rare, crooked grin. I feel myself
flush as I quickly look away, totally busted.
No, I don’t
mind helping him one bit.

Isabel Love is a hopeless romantic. She loves reading about two people falling in love, overcoming whatever obstacles they may face, and finding their happily ever after. A husband, two kids, and a full-time job keep her busy by day, but by night, she can be found with her Kindle in hand, reading “just one more chapter”.