My musings…
4 HIGHLY ADDICTIVE CROWNS
Addicted, the fourth standalone in the Tempting series, chronicles the forbidden romance of an escort and her client, and Alex Lucian delivers with the steam and the romance to make this read so much fun.
If you have read the previous books, then you have encountered Elias and his anger with his interactions with Nathan and Adele.  However, this story presents a more peaceful version to him.  He is still angry and still reeling from the death of his sister, which he accomplishes by severing most relationships.  He finds value in physical contact with no emotion, that is until he meets Ruby.  I love the side of him that she brings out.  She wakes him up, shows him life and the need for love.  By the end of the novel Elias has become my favorite hero of the whole series.  His protectiveness, his acceptance, his willingness to explore and try new things, and his skills in the bedroom makes him a top notch hero.  Elias’s counterpart in the book, Ruby, is an escort that is trying to make it in NYC as a Grad Student, using the money to help her pay the bills and tuition.  This aspect makes the reader sympathize with her, among other character traits the author reveals.  What the reader will ultimately love about her, though, is her insatiable desire knowledge and experiences.  This is the level that readers will connect with her and see themselves in her as well
The two of them together will set your book on fire.  Their chemistry is off the charts, as there is an equal pull for dominance between the two, and they challenge each other in every way.  What makes some of their scenes so hot is that they have complete sexual freedom with each other and independently.  Their is trust and respect and an adventurous nature to their bedroom activities, and this translates into some intense and amazing intimate moments.
The plot is used to develop the relationship of the characters, and Alex Lucian paces it perfectly, allowing the reader to see them getting to know each other and fall for each other, making their relationship believable.  Although together physically, their emotional journey throughout the story allows the reader to invest in them, which only leads the the soul-destroying conflict and climax.  Alex Lucian delivers, though, with the excerpt, leaving the reader satisfied with the ending of the story.
Alex Lucian is an author I have come to one-click.  He stories always center around characters, who are not always easy to like, but are authentic and have real-world problems.  She isn’t easy on her characters and pushes them to uncomfortable places at times.  But her unique voice and plot lines make her stand out as an author.  I know that I will certainly continue to read her fantastic stories.
ARC received in exchange for an honest review.

Addiction: the state of being enslaved to a habit or practice or to something that is psychologically or physically habit-forming.
Ruby was sin and sex.
The ultimate indulgence and worth every penny she cost me. I paid for her body, but didn’t know she’d end up embedded in my soul.
Elias was dark and tempting.
Unmatched in intensity and passion compared to my other clients. He handed me cash in exchange for my touch, and he dug himself into my heart instead.
Money changes things, firms up the lines of a relationship. But when it becomes an addiction—an all-consuming, life-changing addiction—the lines are completely obliterated. 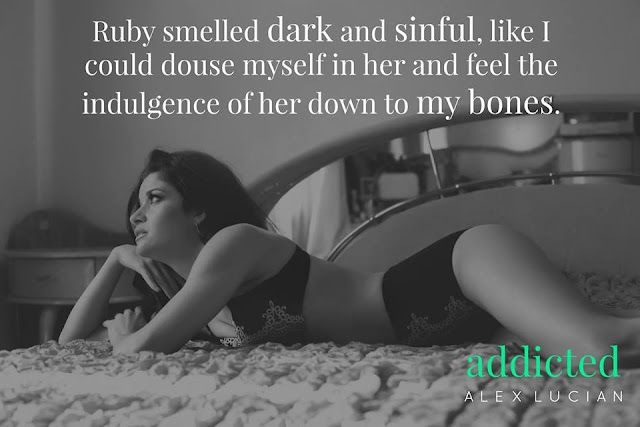 I laughed under my breath before stepping forward and punching the emergency stop button on the elevator.
“What are you doing?” she asked, her eyes wide in her face. Her pale face. Ever since that douche stepped into her space, all the color had been sucked from her skin.
Which is how I knew she was fucking lying to me.
No former client would have given her that kind of reaction. That guy knew her. And not just biblically, but definitely that too, given the crazy-ass gleam in his eyes when he looked at her.
When I didn’t answer right away, she fidgeted, crossing her arms over her stomach and then letting them drop again. Then she swept a hand through her hair, making sure the curls were still laying over one shoulder.
“Beck and call, right?” I rasped out, leaning my shoulder against the wall of the elevator.
“What?”
“You. You’re at my beck and call for these thirty days, right? This being day one.”
She mimicked me, leaning her shoulder against the opposite wall, essentially facing off with me in the small space. “That’s right. Do we need to discuss this now?”
There was a slight edge to her voice that I’d never heard before, and I wasn’t ashamed in the slightest to say that it hardened me even further. “Why not?”
“Because I prefer not to have business discussions when I’m in a box that’s suspended sixteen floors above the ground.”
“We’re not going to have a discussion.” I straightened, undoing my belt. Her eyes tracked the slow movements of my hands.
“I’m not having sex in this elevator.”
“No, you’re not.” I raised one eyebrow, and lifted my chin at her. “You’re going to get on your knees for me. I want to know what your lipstick looks like on my dick.”

Alex Lucian is an author living on the eastern coast of the United States who appreciates being anonymous, for personal and professional reasons. Tempting is Alex’s first novel.
Facebook ~ Twitter ~ Goodreads ~ Newsletter ~ Tumblr