AVAILABLE NOW ON ALL PLATFORMS!

The queen of suspense and steam strikes again! Black Sheep ignited my kindle with the insta-chemistry between Drew and Cannon and enough danger to have me speeding through the pages.

Cannon is everything I remember from his secondary character stint in previous books. He is a black sheep, though, in more ways than one with his integrity and heart, straddling the line between mob criminal behavior and staying true to who he is.

Drew is probably one of my favorite Meghan March heroines because of her sense of justice and her bravery in the face of fear. She grapples with her goals and her growing feelings for Cannon, but, again, she has integrity and bravery in spades.

This story, true to a Meghan March book, has that suspenseful tone and insta-chemistry. There are moments were they connect emotionally, but they were just getting started as truths begin to come to light, which adds to the plot revelations. In what readers have come to expect, Meghan March ends Book one with a bang, and I’ll eagerly be waiting for the fall out.

Cannon and Drew are hot. The story builds with impending doom. The ending is epic. All culminating in a must read, quick suspenseful romance.

Every family has a black sheep.
In the infamous Casso crime family, that black sheep is me—Cannon Freeman.
Except I’m not a free man. I’ve never been free. Not since the day I was born.
I owe my loyalty to my father, Dominic Casso, even if he won’t publicly acknowledge me as his blood.
I’ve never had a reason to go against his wishes… until I met her.
Drew Carson turned my world upside when she walked into my club looking for a job.
Now, my honor and my life are on the line.
Going against my father’s wishes might buy me a bullet straight from his gun, but black sheep or not, it’s time to make my stand.
She’s worth the fallout.

I never expected to be anyone’s white knight. That’s not a role I’ve ever played.
But when the Casso crime family shifts into uncharted territory, they’re looking for a new hero, and they’re looking for me—Cannon Freeman, the black sheep.
But my time in disgrace is at an end.
It’s my turn to rise up and save the people who matter most to me.
Even if my family has never given a damn about me, I will not let them fall.
More than anything, I will not let her fall. 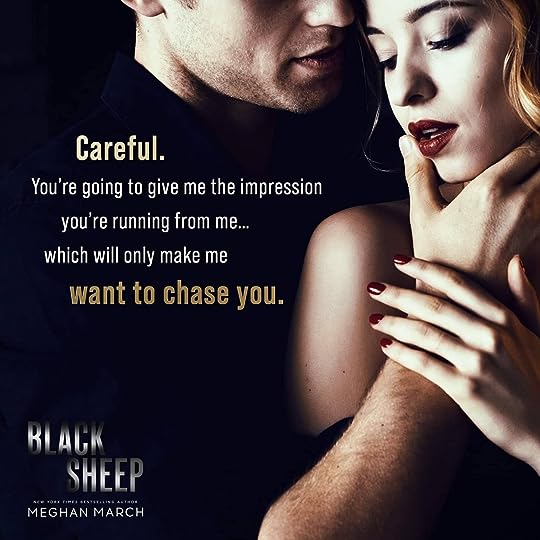 A New York Times, #1 Wall Street Journal, and USA Today bestselling author of over twenty novels, Meghan March has been known to wear camo face paint and tromp around in woods wearing mud-covered boots, all while sporting a perfect manicure. She’s also impulsive, easily entertained, and absolutely unapologetic about the fact that she loves to read and write smut. Her past lives include slinging auto parts, selling lingerie, making custom jewelry, and practicing corporate law. Writing books about dirty talking alpha males and the strong, sassy women who bring them to their knees is by far the most fabulous job she’s ever had.

To get the inside scoop on a daily basis, search Meghan March’s Runaway Readers on Facebook and join the fun.