Holy mother of intensity, Anne nailed this thoroughly addicting read. This book starts off running and continues until the last page leaving you strung out and breathless. The Greenstone Security series is quickly becoming one of the best series I’ve read, each book gets better and better. I was not fully prepared for this delicious Slow-burn romance that will have you twisted up in the best kind of way.

He liked it when ugly things brushed beautiful things.

Lance is a pure Savage: Brooding and Alpha in the most intense way he just drips testosterone like cologne. He is a man of few words, mainly grunts and brooding stares, but he does not need any words to exude his overpowering charisma. This man was so freaking delicious I can’t even express how much. This man was so beautifully broken you can’t help but want to break down his walls and make him better.

The connection between Lance and Elena was immediate. The way he couldn’t leave her alone from the very beginning, was always watching her and taking care of her in his own wordless way’s. It was the little things that he did for her that will melt your heart. Like bringing her donuts from her favorite bakery just because she said she liked them. Or making sure she was eating enough. Not pulling out of the driveway until she had her seatbelt fastened. You wouldn’t expect this beast of a man to worry about these kinds of things. But for her he did. She slowly started healing his tragically broken pieces.

Because she felt so right in his arms when even breathing had felt wrong for the past ten years.

Elena was strength personified. She left an absolutely heartbreakingly terrible situation. One that would have broken many. With nothing except her son and started a whole new life. She may be struggling to make ends meet but she is doing it and she is raising a beautifully funny boy. She is fiercely independent and doesn’t like accepting any sort of help, because of her background. Which doesn’t sit well with the Brooding Alpha who has fallen for her. Their banter back and forth was full of exquisite tension, him with his grunts and sex eyes and her with her awkward mouth that doesn’t have a filter.

The area burned. Ached in a place to the right and south. My body wasn’t just waking up from a coma. It was being resurrected from the dead, and he hadn’t even frickin’ kissed me yet.

Anne has created a story that holds you in a permanent state of mouthwatering tension. The heat between Lance and Elena is palpable you can feel it through the pages. And the slow building passion is so satisfying when it finally explodes melting your Kindle. Anne’s words have a way of seeping into your soul and becoming a part of you, this story is no exception. You will not be disappointed, so what are you waiting for go and read this. Right! Now! And fall in love with this wonderfully broken couple that will tug at your heartstrings and make you ache in the best possible way. My story isn’t unique.
Isn’t rare.
Which is, I guess, what makes it so sad.
The story about a girl who falls in love with the wrong man, lured by tender gazes, devoted promises and gentle touches. The gentle touches disappear and she’s held captive with ugly insults and brutal beatings.
It’s common, this story. My past.
I can’t change the past.
I wouldn’t even if I could.
The ugliness of my past gave me a future worth living for.
Worth dying for.
It gave me a reason to fight. To escape.
That was my mistake. Thinking girls like me could have a choice.
I wasn’t given many promises in my life that weren’t broken, but chaos is a constant promise, always kept, never broken.
He comes amongst the chaos. Amongst the ugly.
He doesn’t promise a way out. He definitely doesn’t promise peace. But he gives me the opportunity for a different ending to my story. 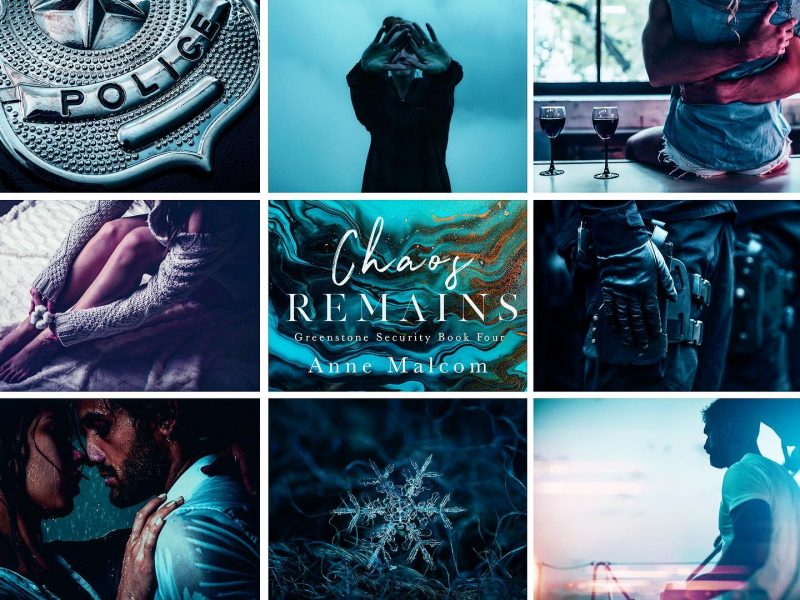 Anne Malcom has been an avid reader since before she can remember, her mother responsible for her book addiction. It started with magical journeys into the world of Hogwarts and Middle Earth, then as she grew up her reading tastes grew with her. Her obsession with books and romance novels in particular gave Anne the opportunity to find another passion, writing. Finding writing about alpha males and happily ever afters more fun than reading about them, Anne is not about to stop any time soon.

Raised in small town New Zealand, Anne had a truly special childhood, growing up in one of the most beautiful countries in the world. She has backpacked across Europe, ridden camels in the Sahara, eaten her way through Italy, and had all sorts of crazy adventures. For now, she’s back at home in New Zealand and quite happy. But who knows when the travel bug will bite her again.