Five of Cups by Trisha Wolfe

Trisha Wolfe writes dark, psychological suspense so well. Team that with murder and romance and I’m all in! Once I started reading The Five of Cups I couldn’t put it down. A clever storyline, with so many twists and turns, had me hanging off the edge of my seat. Characters who conspire, together with the fast pace of the storytelling, means that you need to keep your wits about you in order to fully appreciate the complexities of the plot.

I love that the story comes from the male point of view, which gives it such a great impact for me. Dr. West is arrogant but not so much so that his character doesn’t feel realistic. He’s also honest in his analysis of himself and I love his sarcastic humour. The darkness we love from this author is still there but it’s ingenious and skillfully applied. I would describe this whole book as tense, intriguing and exciting. I can imagine the author rubbing her hands together, whilst giving an evil laugh like some cartoon villain when she wrote the ending!

All of this, plus a fantastic, inventive, spin on the use of tarot cards make this a five star read for me. 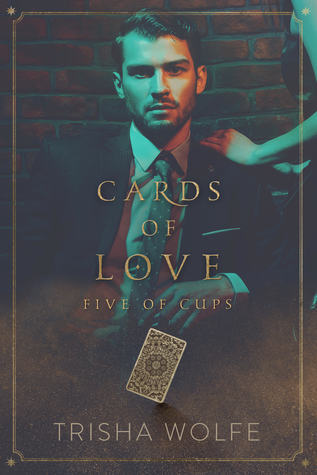 “How do you see your cup, Dr. West? Half full, or half empty? Her life depends on your answer.”

Dr. Ian West is the best trial consultant in the city, and he knows it. He’s made a living—a damn good one—helping lawyers win cases through his special brand of trial science. As a natural people reader, West’s one grave error presents in the form of a murderer named Quentin Shaver.

Amid Shaver’s trial, a dangerous bargain is struck, and—impressed with Dr. West’s abilities—Shaver engages him in a battle of wits. The prize? One gritty defense attorney from West’s past—the one woman West could fall for.

Loss broke West once before. Grief his sole companion, until Porter breaks down his defenses. But just as West is about to take a chance on love again, Porter becomes leverage in a sadistic game between doctor and madman.

Can Dr. West save the woman he loves before the last cup runs empty?

Be the first to hear about new releases and sales by signing up for Trisha Wolfe’s Newsletter below.