Hate the Game by Winter Renshaw

4.5 not your usual jock CROWNS

I’m not a huge fan of sports or sports romances on the whole, but I’d describe Hate the Game as sport light. It’s an enjoyable, easy to read romance with more of an emphasis on the relationship between the two main characters, rather than the game, which is absolutely fine by me.

Talon has been chasing Irie for a number of years, without success. However, when they’re forced to become study partners, he takes the opportunity to show her that he’s more than just the arrogant jock he’s perceived to be. Whilst I could’ve lived without the constant reminders of how popular he was and how all the other girls wanted him, hence all the nasty looks and remarks thrown Irie’s way, I actually really liked Talon. His patience and how he cares for Irie, their banter and chemistry were spot on. His intentions may not have started out as honorable, but I loved the way his character grew, along with his feelings for her, as the story progressed.

Initially, Irie comes across as rather prickly and standoffish, except in her interactions with her Aunt Bette. I have to say, I want an Aunt Bette! She’s a wonderful straight talker, funny and open minded. A great emotional support. However, we’re given little hints that Irie’s hiding something from her past which, when it was finally revealed, made me completely understand her actions and lack of trust, to feel huge sympathy for her. Talon went up in my estimation by leaps and bounds too, once he was made aware what she was up against. He also has his own secrets which could prove to be a huge barrier to their future together.

Whilst Hate the Game was just my cup of tea, I do feel, however, that the blurb is not a true representation of the book. It’s certainly not as angsty and there’s not as much conflict between the hero and heroine as this makes it seem, which personally I was grateful for but maybe bear that in mind if that’s what you’re particularly looking for. For me, this was a fun read, one which I enjoyed very much. The story as a whole kept me turning the pages and a lovely sweet epilogue left me with a satisfied smile on my face.

Talon Gold is a lot of things: good at football, bad at love. Obsessed with scoring, refuses to play by the rules. Cruel. Relentless. Brilliant. Intoxicatingly attractive.

Despite his demanding reputation and propensity for being the most arrogant a-hole ever to strut Pacific Valley University’s picturesque campus, everyone wants a piece of him: coaches, scouts, and pretty little campus fangirls with pouty lips and perfect top knots.

But Talon … he only wants a piece of me.

And four straight years of infuriating rejection means I’m almost positive he’d take a night with me over a national championship trophy.

But I’m no fool—he only wants me because he can’t have me. And with graduation approaching, time is running out. He’s more desperate than ever, pulling out all the stops and doing everything in his power to get in my good graces.

They say, “Don’t hate the player, hate the game.”

I have my reasons …

Sorry, BMOC. This victory? Not going to happen. 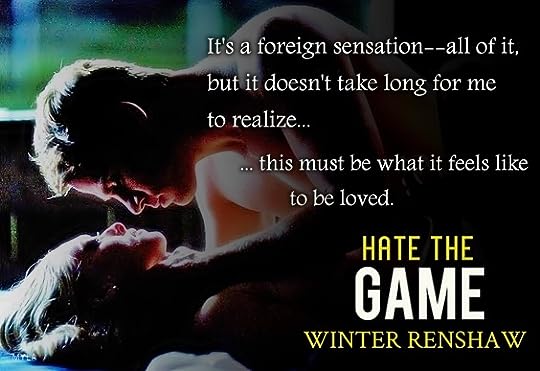 EXCERPT
“You didn’t have to do that for me,” I tell him.

He scoffs, taking a sip of his beer.

“These are your glory days,” I add. “You should enjoy them. Take full advantage. You shouldn’t be pretending to be annoyed by all this attention all because you’re trying to impress some girl who doesn’t even want to be impressed.”

“Not trying to impress you.”

“All right.” He nudges his shoulder against mine. “Maybe I am. Just a little.”

“Just like that?” he asks. “And just because you say it does?”

“Pretty much.” I stand, stretching my legs. A small shiver works its way through me and from here, the house looks warm and glowing and a million times more inviting than it did before.

Talon rises, towering over me with his eyes locked on mine. “Why do you hate me, Irie?”

“Just because you’re not my type and I don’t want to date you doesn’t mean that I hate you, Talon. I don’t even know you—how can I hate someone I don’t know?”

“How do you know I’m not your type if you won’t take the time to get to know me?” he asks.

Fair enough. “Maybe I don’t know you, but I know enough about you to know you’re not my type.”

“Says the guy who’s fucked half the school.” I fold my arms and glance down. That was a little harsh even if it’s true.

I challenge myself to meet his accusatory stare, to own my stance. “I told you earlier … you have a reputation. I’ve heard girls talk about hooking up with you. I’ve heard about the way you treat anyone who so much as thinks they might have a chance with you. Forgive me if I’m trying to steer clear of your warpath.”

“Irie, you are the reason for that warpath,” he says, his tone callous and his jaw flexing.

“So I’m supposed to be flattered? You treat other girls like crap because they’re not me? Is that what you’re trying to say?”

“Am I though?” I angle my head to the side, my mouth twisted as I fight a smirk. Maybe I’m flirting. Maybe I’m also making a point.

Talon is looking at me like he’s two seconds from devouring me—my mouth specifically. His tongue wets his full lips and his left hand tightens at his sides, like he has to refrain from allowing himself to touch me.

There’s a lot of clout standing before me.

An insane amount of restraint.

He’s mere inches from the only thing he wants—the only conquest he can’t have—and it’s physically torturing him.

To wield this kind of control over someone so powerful is a sensation unlike any I’ve experienced before … and in an unexpected turn of events, my nipples harden, my sex tingles, and my lips swell with a curious ache.

In my defense, I’m not normally aroused by torturing people.

In his defense, he’s not normally used to reoccurring rejection.

This is quite the standoff we have going.