I have to admit I hesitated a little before starting this book, as I wasn’t quite sure whether it was something I would enjoy. I’m not a huge fan of fake marriage/marriage of convenience stories but I loved the previous book I read by this new to me author and so decided to dive in. I’m so glad I did as it was wonderful and quite different to what I was expecting.

Paige and Logan meet in a way which feels rather serendipitous and, despite the fact that they barely know each other, they soon find themselves entering into a marriage contract which they hope will solve their respective problems.. Their agreement is mutually beneficial, each requiring a spouse for very different reasons and as such, I appreciated the fact that there wasn’t a load of drama surrounding their decision to marry. That doesn’t mean to say that everything is plain sailing in the Ward household, especially as Logan is determined that things should remain platonic between him and his new wife and she’s equally determined that it should not! Throw in 12 year old twins with a propensity for playing pranks, a stoic 14 year old with a wise head on her shoulders and a 16 year old who is still trying to figure out what she wants to be and acting out whilst she does, and it’s anything but dull.

I absolutely loved Paige, her confidence and her feisty personality really appealed to me. She’s a no nonsense kind of woman with a kind nature and fantastic sense of humor. Logan is the strong silent type, a man of mystery, all self controlled and alpha growly, and I couldn’t wait to see how long it would take Paige to break through his cool demeanor. They might have come together unexpectedly but, despite their obvious differences, they were actually a perfect match.

This is only the second book I’ve read by this author but once again, I enjoyed her writing style enormously. I thought the pacing of the book was just right, with a great balance of fun, humor, steam and drama. I loved it and spent most of my time reading with a big old smile on my face. 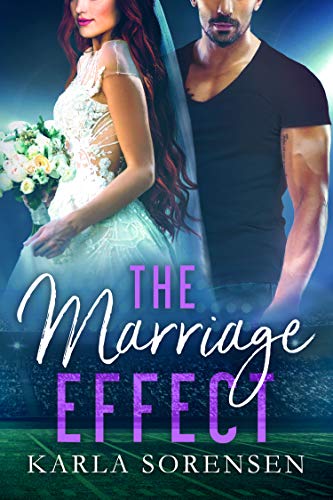 Logan Ward doesn’t want any more women in his life.

Being a football player and legal guardian to his four younger sisters means his playbook is full. However, one of them just landed in the hospital, which gives his brother the shot he needs to challenge Logan for custody.

Legal counsel says there’s only one thing Logan can do—find himself a wife.

Like walking away from her modeling career without a thought of what might come next. She really doesn’t think it through when she proclaims herself Logan’s fiancé at the hospital, simply because the sexy—albeit grumpy—football player forgot his cell phone at a party and security won’t let her pass. It’s not her fault it was overheard by the worst possible person.

A bargain is struck, and a fake marriage is the perfect solution. But the simple solution creates a whole new problem: they’re not as different as they seem. The reluctant groom has fire inside him, and his impetuous bride is about to light the match.

Well, let’s see … I’m a wife and a mother. If the things that I write bring a smile to someone’s face, then I’ve done my job. I am obsessed with Outlander (both the books and the show). I’m almost exclusively a romance reader, which means some people will never consider me a literary snob. If I could meet one historical figure, it would be Jane Austen. I received my Bachelors in Public Relations and worked in health care marketing before I had my babies. I hate Twitter. I do it, but I hate it. Also, if you want to get on my good side, bring me wine and I’ll love you forever.